Rally of the Heartland turns back the clock

Simon Evans and Ben Searcy shared wins with Aaron Bowering and Nathan Lowe in the inaugural Lightforce Rally of the Heartland on June 3-4, winning the Classic and South Australian Rally Championship categories respectively.

Held in the state’s mid-north, the rally was centred around Burra with stages stretching from Hallett in the north to Waterloo in the south.

The event’s slogan was “how rallying should be” and was a step back into time for South Australia, the first non pace-noted event for many years, with a feeling of the 1970s or 80s.

Classic cars ran both Saturday and Sunday with the MRF Tyres S.A. Rally Championship on Saturday only.

The aptly-named Long Stage 1 near Hallett was up first, 78 km of dusty, bulletproof roads surrounded by cattle properties.

Next up was Turbine Row 1, a daunting 9.7 km strip of road winding along hilltops and through dips in the nearby Mt. Cone Wind Farm.

This was followed by Pale and Steep, back across the Barrier Highway, then  Turbine Row 2, and Johnny Green, a short run around the Bon Accord Mine heritage site in Burra, which in reverse direction had been the site for Friday’s media day.

Long Stage 2 at night was the day’s final run.

Evans (Datsun Stanza) had gone into an immediate lead on the opening stage in Classic, whilst his team-mates Darryn Snooks and Michael Foreshew (Datsun Violet SSS) had exhaust problems, dropping them down the order. Snooks made repairs and carried on, setting quick times on other stages.

Alker and his father Brenton took the 180B way back to Adelaide for repairs and returned to run on the second day, their actions winning them the Atlantic Oils Spirit of the Rally Award.

David McDonough and Lyndon Wilson had entered a Sigma in Classic, but problems saw them revert to their usual Mitsubishi Evo VI, which looked confusing as they kept showing up in Classic results.  They had paid their money so were entitled to run both days. David joked that he had fitted the Evo with a Sigma engine.

Ignoring the Evo, which was at the pointy end of times, other front-runners were Stuart Bowes and Mark Nelson (Mercedes 450 SLC) and Luke Olholm and Gordon Trigg (Datsun 260Z). 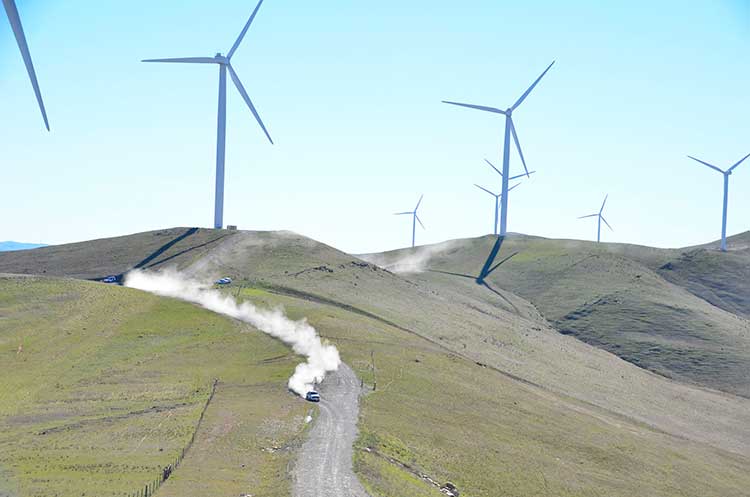 Matt Selley and John Caldicott’s Escort is dwarfed by the wind turbines on the Turbine Row stage.

After setting second fastest time in Classic through Turbine Row 1, the N.T. crew of Chris and Blake McCormack were out on the following Pale and Steep with engine problems in their Magna.

In SARC, Southern rally winners Aaron Bowering and Nathan Lowe (Subaru WRX) had pulled out a 44 second lead on the opening stage over Gary Brown and Mike Dale (Mitsubishi VR4), in turn 56 seconds ahead of McDonough and Wilson.

Then Zayne Admiraal and Matthew Heywood (Subaru WRX) then set fastest times on the next four stages.

Bowering was again quickest on the day’s final stage, finishing the event 2 minutes 35 seconds ahead of Brown, who struggled at times with gear selection, in turn 33 seconds in front of Admiraal.

Evans led Classic at the end of their heat from Bowes by 13 seconds, Olholm a huge 5 minutes further back in third.

Whilst fourth in Classic and fifth in SARC, Matt Selley and John Caldicott’s Escort Mk II ran for 3 km with a flat rear tyre on Long Stage 2, before hitting a concrete post, side-on, putting them out.

McDonough, running fourth in SARC was also out on the stage with a cracked transfer case. Repairs saw him return for Leg 2 on Sunday.

Beginning with a 12 km run through Waterloo Wind Farm further south on Sunday, the rally headed across to World’s End for Into The East before a transport back north for two back-to-back runs of Long Stage Reversed. 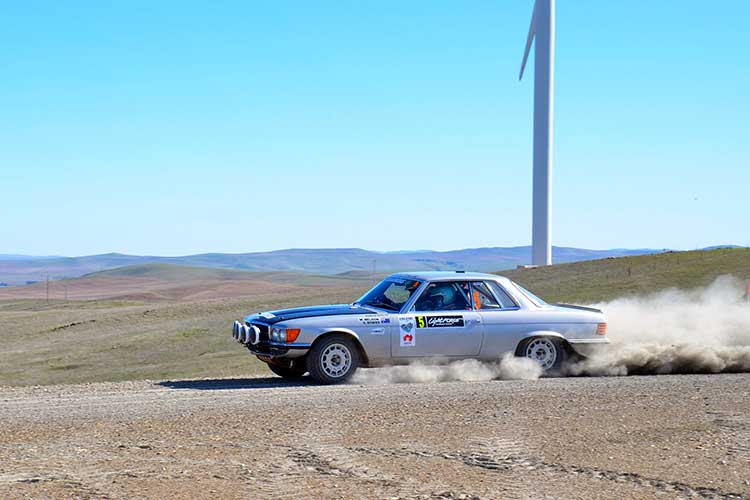 Snooks was on form on the second day, claiming second and third fastest times, but Evans had been fastest on all 10 stages in the event, extending his lead by day’s end to win from Bowes by a whopping 9 minutes 31 seconds, with Olholm a further four minutes behind.

Round 3 of the MRF Tyres S.A. Rally Championship is the Copyworld Walky 100 at Robertstown on August 12.