Estonian driver Ott Tänak scored a long-awaited first win in the FIA World Rally Championship at the end of a gruelling Rally Italia Sardegna on Sunday.

After 73 WRC starts, Tänak drove his M-Sport Ford Fiesta across the finish line in the coastal town of Alghero 12.3 seconds ahead of Toyota’s Jari-Matti Latvala.

Thierry Neuville was a further 55.4sec back in a Hyundai i20, closing the gap on championship leader Sébastien Ogier to 18 points. 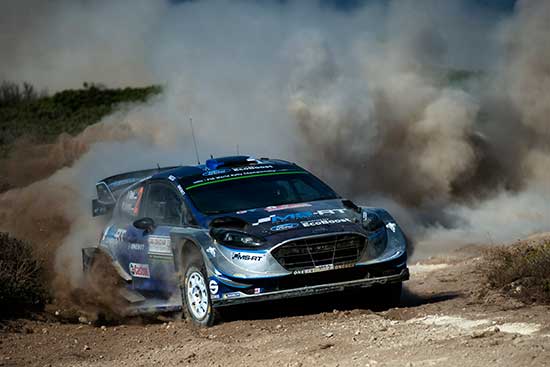 Almost a year ago, the 29-year-old had thrown away a certain win in Rally Poland with a last-minute mistake. Distraught, he was consoled by World Champion Sébastien Ogier, who was one of the first to congratulate him on Sunday before he celebrated with a traditional dive into Alghero harbour.

The fifth different winner from seven rounds so far in the most unpredictable season in many years, Tänak lifted himself to third in the driver championship standings, while Neuville edged closer to leader Ogier.

Tänak’s success was sealed despite a late scare when a hole allowed his car’s to fill with dust. His visibility obscured, Tänak overshot a junction on Sunday’s opening stage and slithered into bushes.

It offered a glimmer of hope to Latvala, who was chasing down a 23.3sec deficit, but when the Finn stalled his engine in the next special stage, he conceded defeat. Tänak measured his pace through the final three tests to score an emotional win.

“It was a difficult weekend, but the first half of this season has been great,” he said. “The new car and a strong teammate (Ogier) is making me push hard. I hope it’s the first of many wins because it’s all coming together now.” 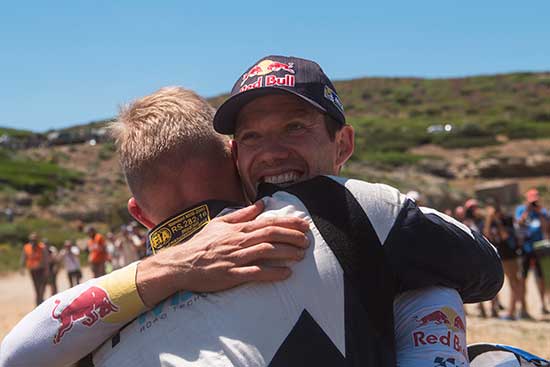 World Champion Sébastien Ogier congratulates Ott Tänak on his first WRC win. (WRC pic)Latvala headed a strong weekend for Toyota Gazoo Racing, with three cars in the top six. He avoided major problems in a rally of attrition to remain firmly in the title battle.

Neuville led initially and stayed in contention despite enduring the worst of the conditions on the slippery gravel roads on Friday. A brake problem on Saturday cost a minute and ended his bid.

Esapekka Lappi was a remarkable fourth in only his second World Rally Car outing. He won six of the 19 tests in his Yaris to finish 1min 12.4sec ahead of Ogier.

Mads Østberg limped through the final stage with broken suspension in his Fiesta but retained seventh ahead of Andreas Mikkelsen on his debut in a Citroën C3.

Hayden Paddon’s woes continued. After leading until the mid-point on Saturday, the Kiwi crashed his Hyundai on Saturday afternoon and again on Sunday.

The second half of the season begins on the fast gravel roads of Orlen 74th Rally Poland, which is based in Mikolajki, on 29 June-2 July.

The 2017 WRC closes with Kennards Hire Rally Australia on the New South Wales Coffs Coast on 16-19 November. Tickets are available now from www.ticketek.com.