Dowel and Windus on top in Queensland rallycross finals

Both classes in the third round of the RXAus.com.au RallyCross Australia Series at Stanthorpe’s Carnell Raceway had classic Super Final finishes, with Justin Dowel and Arron Windus coming out on top after some spirited racing.

Justin Dowel slides his way to the win in the RallyCross Australia round in Queensland.

In the first trip to the rural Queensland venue for the Series, Justin Dowel (Hyundai i20) overcame day-long combatant Will Orders to claim the victory in the AWD class, with the final race of the day going right down to the joker laps.

At the start, Orders’ Mitsubishi Lancer ran side-by-side with Dowel on the run to turn two, but better drive out of the corner gave Dowel the ultimate advantage.

“This is RallyCross, you have to be full aggressive, full commitment to every corner, and don’t make any mistakes.

“That was the plan, and I only made one tiny error on the entry to the joker lap, it wouldn’t go down to second (gear), and I thought ‘I’m in a bit of trouble here’.

“I pushed harder to make it up, and we got away with the win.

“We had to win, Will has been beating me a bit lately, so it evens things out, but the racing all day was super close, and that’s what it’s all about.

“(Carnell Raceway) allows you to be super aggressive, I really enjoyed driving it, it’s a real driver’s track.

“For next time we’ll widen out the gravel a little bit more to help with overtaking in those areas, but overall it was sensational.” 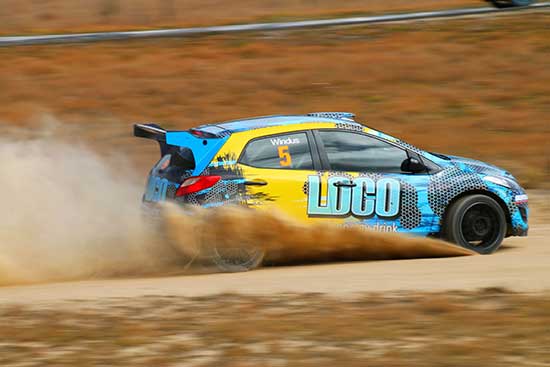 Arron Windus won the 2WD category in a Mazda 2.Third in the Super Final was Troy Dowel (VW Polo), who was also the top AWD Production Car and Junior for the day, ahead of Mick Ashby’s Audi S2, and Barry Davey’s Mitsubishi Lancer.

It was a very similar tale in 2WD, with Mazda 2 driver Windus battling all day long with the Ford Escort of Mike Conway.

“It was awesome, Mike has had the upper hand at the last round back at Marulan against the Mazda,” said Windus.

“It’s a different track, but we tried to turn it up and have a crack.

“It wasn’t easy, so it was great to come away with the win, it was just great racing.”

Troy Dowel (Ford Fiesta) backed up for double duty in 2WD and claimed third in the Super Final, with Scott Anderson (VW Polo) in fourth.

In Excel 2WD, Ron Bustard put in a strong showing, despite being the only finisher in the Super Final, as Noel Roger failed to start.

Earlier in the day, Orders claimed the AWD pole position with a time of 0:41.0530sec, but a mystery mechanical issue allowed Justin Dowel through to claim the opening heat win.

Dowel provisionally claimed the second heat, but was penalised 10sec for missing his joker lap, relegating him to third behind Orders and Troy Dowel.

Orders got the best of the start in the final heat and was never headed, with the story repeated in the final.

Meanwhile Windus got the best of 2WD qualifying, setting a quick time of 0:43.4380sec.

Precious little separated the pole man from Mike Conway in the three heats, with the joker lap typically the difference.

After Windus claimed the first two heats, Conway broke through in the third, and was also first home in the final.

The RXAus series is scheduled to continue on July 29th, with the fourth round from the MTDC at Murulan in rural New South Wales.

More information on the series can be found on the official website, www.rxaus.com.au