The 2014 ECB Bullbars Australian Rally Championship kicks off this weekend with the running of the National Capital Rally in Canberra. Only 13 cars have entered the two-wheel drive component of the championship, with no starters in the SUV Rally Challenge.

Despite the lack of numbers, the fight for victory will still be hard-fought, with reigning champion, Eli Evans, going head-to-head with Scott Pedder and Brendan Reeves.

After several years with the factory Honda outfit, Evans was to have driven his original Civic Type R in this weekend’s season opener, however when the car wasn’t going to be ready in time, he made the switch to Justin Dowel’s Volkswagen Polo.

Dowel is sitting out the opening round due to business commitments, and Evans is hopeful that the car will be right on the leading pace. 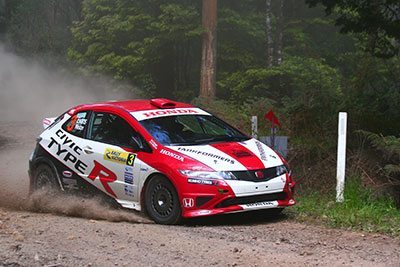 Eli Evans was to have driven his championship-winning Honda Civic, but the car was not ready in time for the Nat Cap Rally.“It’s a new car to me but I can see the potential,” Evans said recently. “The aim is to be competitive, and to aim for a podium finish, I think that’s realistic when you have a new car that you’re driving for the first time.”

His biggest threat is likely to come from Scott Pedder in the same Renault Clio R3 that he drove in 2013. Although Renault have withdrawn from the championship this year, Pedder’s car is being run by the Walkinshaw Performance operation, which are making their rallying debut.

Pedder is confident, however, that their lack of rallying history won’t pose too many problems.

“I’m confident that with WP’s wealth of experience and pool of engineering talent, I have all I need to step to the top of the ECB ARC in 2014,” Pedder said.

The third likely winner is Brendan Reeves in the Mazda2 that he campaigned last year. The Mazda showed good pace towards the tail end of last season, but was hampered with mechanical problems throughout the year, and Reeves will be hoping that his team have finally gotten on top of those gremlins.

"I'm really excited to start this year's ARC," Reeves said. "With the experience we gained last year, I think our prospects for 2014 are very exciting.”

The debut of Team Citroen Australia adds an exciting new element to this year’s ARC, with the experienced Tony Sullens teaming up with up-and-coming young driver, Adrian Coppin, in a pair of factory supported DS3 R3Ts.

The turbocharged DS3s have been setting national rally championships alight overseas, and if Sullens and Coppin can quickly come to grips with the cars, they could well cause an upset. 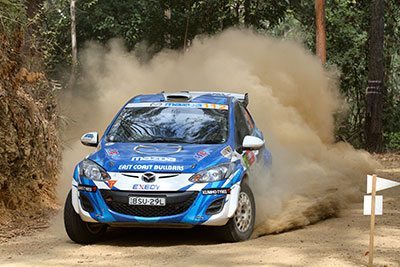 Brendan Reeves will again be a threat in his Mazda2 after good pace late in the 2013 ARC.Another in a new car will be Alan Roe, debuting his Ford Focus ST.

The 4WD National Rally Series event is headed by Richie Dalton and USA co-driver, Alex Gelsomino, in a Lancer Evo 9, with Mike Bailey and Gerald Schofield (also in Lancers) their main threats.

In the classics, Neal Bates will start a strong favourite in his Toyota Celica, particularly with the local ace on home soil. 2013 Alpine Rally winner, Jeff David (Porsche 911) and NSW hot-shot, Claude Murray (Datsun 1600), look to be Bates’ only real challengers.

The National Capital Rally gets underway on Saturday morning, with Heat 1 offering eight competitive stages over a distance of 108km. The day includes four stages, each run twice.

Sunday sees a further seven stages (three of which are run twice), and a competitive distance of 82km, before the champagne is sprayed and the winners accept their trophies on Sunday afternoon.