New and more simplified rules, a naming rights sponsor and a revised format for State Championship, Development and the Hyundai one make series has seen a 100 per cent increase in competitor registrations for Rally NSW in 2014.

With less than a week until the opening round of the Garys Motorsport Tyres NSW Rally Championship in Canberra, there are already 86 competitors registered for the various series, up from just 43 in 2013.

There are already 61 competitors registered for the Garys Motorsport Tyres NSW Championship, up from just 36 last year and this  has been accompanied by a rise in registrations  across all the Rally NSW series' including the new stand alone Techworkz Development Rally Series, the one make Hyundai Excel series and for the NSW Rallysprint Championship. 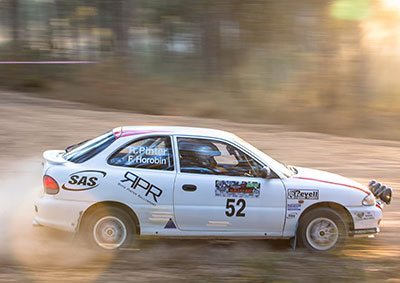 The Gary's Motorsport Tyres NSW Rally Championship will take place over four events in 2014.With the first round of the Techworkz DRS not scheduled until the V-Sport Stages at Termeil on April 5,  the series has already attracted 25 registrations up from just 11 for the Clubman Series it is replacing, while the biggest increase in registrations has come with the NSW Rallysprint Championship, recording 41 registrations for the 2014 title up from just six last year.

The lift in registrations comes following a rebranding of the sport with the new Rally NSW name being adopted across all sectors of the sport along with the unveiling of an all new website.

The addition of a new naming rights partner in the form of Gary's Motorsport Tyres, along with a number of new secondary partners, has also provided added resources to promote rallying across the state.

Chairman of Rally NSW, Col Fletcher, said the key to the increased interest has been a simplification of the rules for cars competing and the groundwork that has been laid for growing the sport.

"We have approached this year with the philosophy that if a car is safe and legal for use on the road then a competitor should be able to enter it," said Fletcher.

"Rally NSW saw that things needed to be easier to understand for competitors and potential newcomers to the sport so we removed as much complication as possible and the result is increased interest in the series."

"While the calendar may not be as big as previous years, we're aiming to have more cars at each event," explained Fletcher.

"A shorter series will result in a more tightly contested battle and as a result we anticipate an increase in the number of teams competing in the whole series.

"The growth of the DRS and Hyundai series will also benefit the Garys Motorsport Tyres NSW Rally Championship in years to come. This year is all about building rallying in NSW back up and it appears that we are on track," Fletcher added.