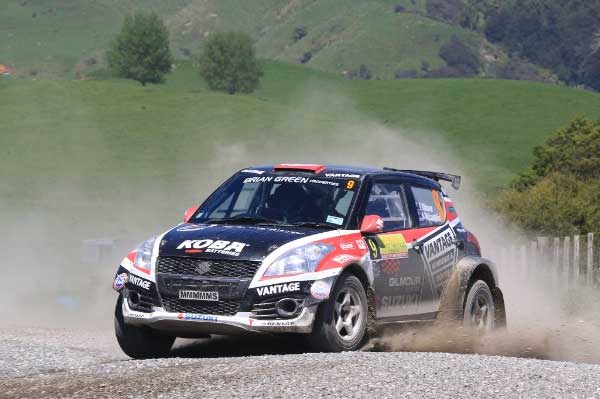 After a long but consistent day, Emma Gilmour finished a credible fifth in the Handy Rentals Hamilton Rally Waitomo, in the King Country, yesterday.

She and co-driver Anthony McLoughlin brought the Vantage Windows and Doors Suzuki Swift AP4 home without any major issues over the six-stages – five of which were more than 30km long.

A tired but happy Emma, described contesting the 207km event as a “massive day.”

“We did about two hours, 16 minutes of competitive driving on really challenging, busy stages,” she says.

“The Suzuki ran very well and I’m pleased we had a good, consistent event and ended up with a top five result.”

This penultimate round of the Brian Green Property Group New Zealand Rally Championship fuelled by Gull and driven by Dunlop, featured a monster final 45km stage, so there was no let-up for Emma at the end of the day.

“I am happy to be building momentum for the end of the season and I have some things to work on so we can have a really good final round in Tauranga,” she says.

The championship moves to its final round Rally New Zealand over the November 25 to 26 weekend.