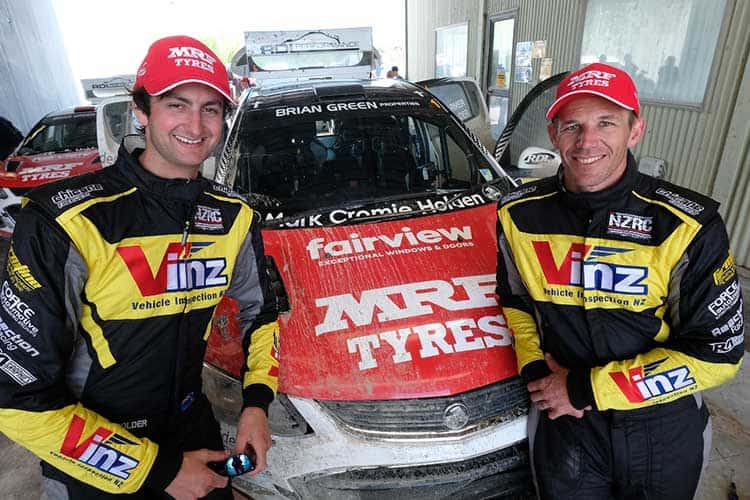 Josh Marston and David Holder were rapt to bring both the Holden Barina AP4+ cars home in the top ten in the Rally of Waitomo, which ran 14 October.

Standing in for the team’s usual driver Greg Murphy, Holder was just six seconds off a top five finish in his debut event with the Penny Homes Holden Rally Team, while Marston finished a credible ninth.

“It was a shame to just miss fifth place,” says Tauranga-based Holder, “but it was a good result to finish and finish pretty strongly.”

Holder, who had Jason Farmer alongside as co-driver, says there were a few technical challenges with the car, as well as contending with running first on the road as the defending NZRC champion during the long day of gravel rallying around the King Country and Waitomo districts. “The fourth and fifth stages around Ohura and Pungarehu were particularly hard with road sweeping; we spent plenty of time sideways and I have to say that fifth stage was probably one of the most fun stages I’ve ever driven in the NZRC.”

Running 11th on the road with co-driver Andrew Graves, Marston says the gravel was pretty heavy for everyone. “There wasn’t the usual distinct line forming. I touched a bank in stage one, in what I thought was a very minor way, but turns out it had affected the wheel alignment and created some steering issues. Once we had that right, Andrew and I were fourth quickest on the fourth stage which shows we’re getting some good pace from the cars now. I was pleased to be trading times with Dave for a few stages, as he’s a great benchmark.”

Holder and Marston agree the 207.8km of competitive stages made for a massive, but excellent day. “Great stages,” Marston says, “and really fun to have our first dry rally since the opening round in Otago. However the distances meant service crews were scrambling to get to the designated service areas to meet the scheduled service breaks, which meant Dave and Jase had to do the first service on their car themselves.”

With this being the first season competition for the two Barina AP4+ cars, every rally is another chance to continue the development of the new cars.

“It’s great the team has ironed out some of the reliability issues they were experiencing earlier in the season,” Holder says. “Now it’s more the finetuning of handling and grip to up the pace. We have a few things we’d like to work on before the championship final in Tauranga at the end of November.”

Marston agrees that mileage is the key to continued development. “We know where we want to be with the car setup and the cars are certainly more reliable; it’s that mileage to help finetune now.”

Holder appreciates being made welcome by the team. “We definitely felt part of the team and had a great day, so thanks to everyone for welcoming Jase and I, and our guys to the team. Thanks again to Greg for the opportunity.”

Marston agrees: “Dave and Jase fitted in great. It’s a very family-oriented team and everyone worked well together.”

The Christchurch-based team will return north for the final NZRC round of the year, the 25-26 November running of Rally New Zealand in Tauranga which will take competitors across to Raglan and back to Manawahe, near Lake Rotoma, for special stages which have featured in New Zealand’s World Rally Championship rounds in past years.