Thirty years in the making in a Wilde season finale 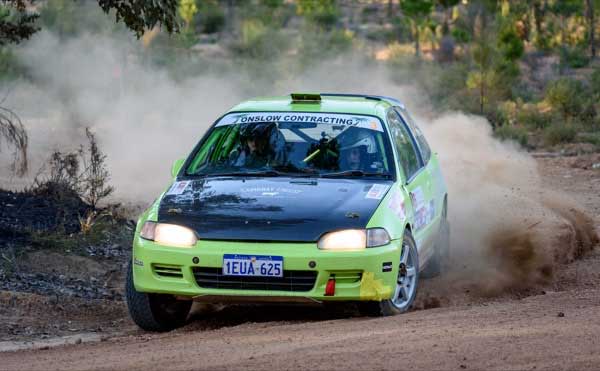 History has been made in the final round of the CAMS Onslow Contracting Western Australian Rally Championship (WARC) with a 2WD car taking the championship title at the 53rd Carrington’s Traffic Services Safari Rally, the first time in 30 years.

It was always going to be a close battle at Australia’s oldest rally with just 35 points separating the top three before the event.

It’s the first time since 1987 that a 2WD has won the Championship, quite a feat for Wilde / Kirkhouse against more powerful 4WD vehicles. Serendipitously, 1987 was the year Tom Wilde was born.

Wilde / Kirkhouse took the lead of the WARC when they won round one, the Trade Hire Kin Kin Rally, which was the first outright rally win for a two-wheel drive car for 23 years when two-time WA State Rally Champion Bob Nicoli finished fastest in his Daihatsu Charade. Nicoli last won the WARC in 1987.

Wilde said he was ecstatic to win and paid tribute to his co-driver and girlfriend Madelin Kirkhouse.

“It’s an awesome feeling to win. This win is really special for Maddie – she grew up around this car as her brother-in-law used to own it, so it’s special for her whole family,” said Wilde, a cheese maker at Cambray Cheese in Nannup.

“We knew what we had to do at this rally to win the Championship, so we preserved the car and cruised most of the way but had to start pushing towards the end, which is the way I prefer to drive anyway.”

Wilde said he might enter the Darling 200 on November 11, but had not yet committed given he has already won the 2WD WARC. 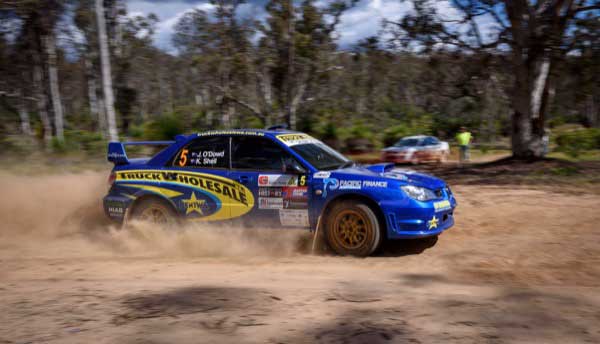 Maximum Motorsport driver John O’Dowd and co-driver Kenneth Sheil won the Carrington’s Safari, winning four of the five stages in their 2007 Subaru WRX STI to finish runner up in the Championship on 386 points.

O’Dowd acknowledged the championship victors and also thanked those involved.

“Tom and Maddie have done a fantastic job all year in their car,” O’Dowd said.

“It’s always a tough rally, one of the toughest of the season. There were some good flowing stages and lots of technical quite cut up stages that made it a bit rough and bumpy. The car ran great though, didn’t miss a beat.

“I’d like to thank the event organisers, WARC sponsors and my own sponsors,” O’Dowd said. His focus is now on Rally Australia, the final round of the World Rally Championship (WRC) in Coffs Harbour next month.

Using Carrington’s Safari to test their Racetorque prepared 2013 Peugeot 208 AP4 ahead of the WRC final around Rally Australia in November, didn’t quite go to plan for Walkem Motorsport’s Marcus Walken and co-driver Glenn Macneall, suffering electrical issues but still finishing the rally (not eligible for WARC points).

For WARC and 2WD competitors, they competed on five stages in and around Chidlow, a total of 106.96 competitive kilometres.

The Carrington’s Traffic Services Safari Rally was the penultimate round of the 2WD Championship.

In second place at Carrington’s Safari were Michael Joss and Megan Logue in a Michael Joss Racing 1999 Nissan Silvia.

A rally rookie finished on the final step of the podium. Mitchel Gray, a 21-year-old motorsport mechanic from Bullsbrook, has co-driven before but never been a driver in a rally. He finished in third place with co-driver Lachlan Beresford in a 1993 Nissan Silvia.

“It’s awesome to finish on the podium in my first attempt at driving! I wasn’t watching the times, just having fun driving,” Gray said.

With the Championship in the 2WD category already won by Wilde / Kirkhouse, the battle for second and third ensues with one round remaining.

No doubt they’ll be preparing for a battle in the 2WD WARC final around, the Darling 200 on November 11.

The penultimate round for Clubman Masters and Clubman Cup Championship was the Carrington’s Traffic Services Safari Rally.

fastest in their MAXYEngineering 1994 Hyundai Lantra. Nicoli / Adams have a healthy lead in the Clubman Cup Championship sitting on 378 points.

In second place were Graeme and Kathy Miles in their Miles Landscaping 2007 Mitsubishi Lancer. Terry Hughes and Monique Smith in their Thornlie Towing 1991 Daihatsu Applause rounded out the top three.

In the Clubman Masters, Julian Wright and co-driver Jeff Huggins were unchallenged, thus winning the category in their Network-IT & Backup4me 1971 Datsun 1200 Coupe.

Three stages totalling 58.93 kilometres were run in the Clubman Masters and Clubman Cup. 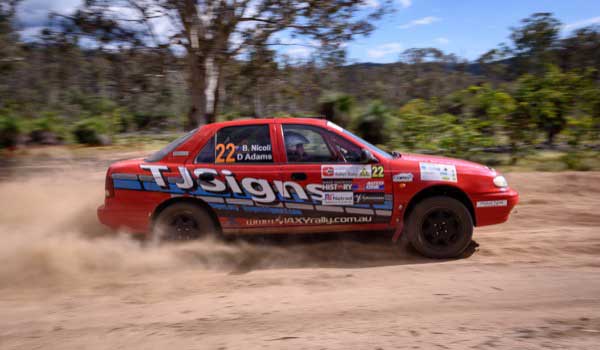