Tough start for Gilmour in NZRC opener at Otago 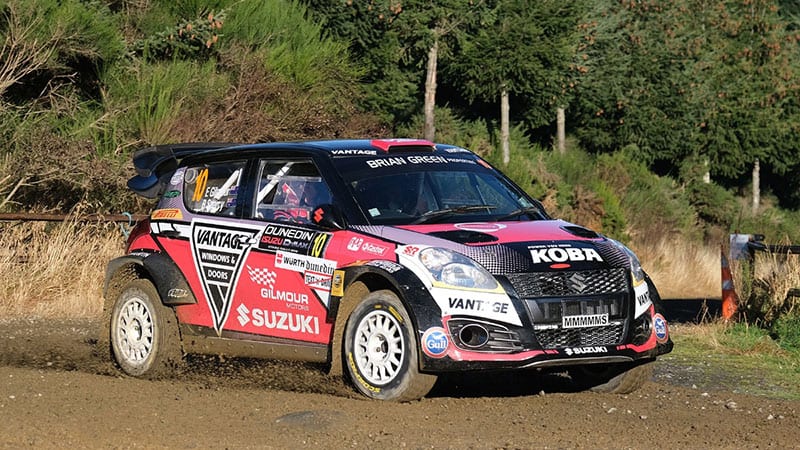 With any car rebuild there will be teething problems and Emma Gilmour experienced her fair share of them at her home event, the Drivesouth Rally of Otago at the weekend.

Issues both days of the 15-stage Dunedin-based event in her fully-refurbished Vantage Windows and Doors Suzuki Swift AP4, made for a tough start to the Brian Green Property Group New Zealand Rally Championship (NZRC).

The rally came to a premature end after stage one when the modified cooling system allowed the Suzuki to get increasingly hot at the stage end. Rather than risk damaging the 1600cc engine, Emma took it back to the service park to be repaired.

“Unfortunately, due to a bad batch of engine componentry we received prior to the event we were very limited in the testing we were able to do with the new cooling system. This is what ultimately cost us a smooth trouble-free weekend,” Emma says.

The team worked on the recently-rebuilt car during the day to fix the issue and Emma was able to head back out on Saturday afternoon – putting on a show for the rally fans gathered around the Anzac Ave tarmac super special stage setting the sixth fastest time in the process.

Restarting on Sunday, Emma and Ben were 2nd quickest to Hayden Paddon to the first split time on the first stage before the exhaust broke off the back of the turbo, causing the car to lose power. It continued through the following stage, but Emma was still able to set top five stage times in both, despite running well down on boost.

The team repaired the turbo and with the Suzuki back up to full power special stage 11 was going well until the car got hot – possibly due to damage caused by the cooling system on Saturday.

“It has been a hugely disappointing weekend. We know the car and set up is fast and unfortunately all of the hard work put in over the off season was compromised by the inability to test properly.”

She thanked her new co-driver Ben Searcy for his great pace note reading abilities “on some of the fastest stages in New Zealand rallying” adding that there was nothing like being thrown in the deep end on their first event together.

Emma also praised her hard-working team for all their efforts over the past few weeks and at the weekend.

“We’ll focus forward to the next round in Whangarei in three weeks’ time. There’s still five rounds to go with this year’s championship so it certainly isn’t over yet.”