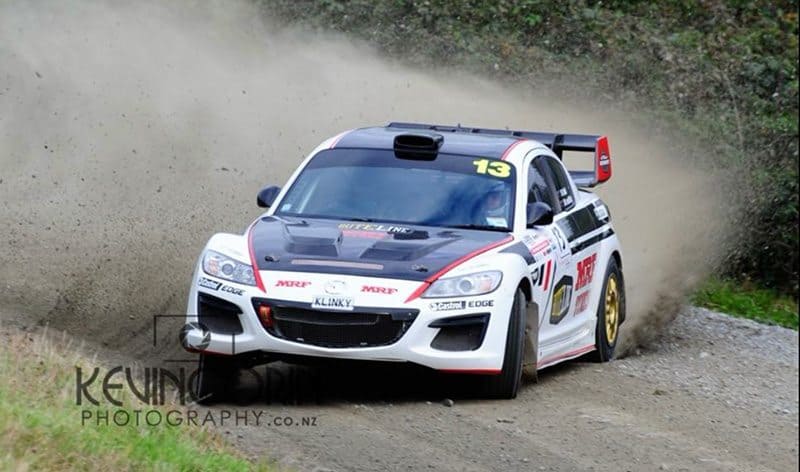 Christchurch’s Marcus van Klink heads to the opening round of the Brian Green Property Group New Zealand Rally Championship in the form of his life after a superb start to the season at two non-championship rounds.

After campaigning his Group B Replica Mazda RX-7 in the Otago Classic Rally since 2011, van Klink and co-driver Dave Neill will this year campaign the wildly popular Buteline Mazda RX-8, complete with triple rotor power plant. It sees van Klink move out of the classic field and into the modern field, which with the forecasted wet weather, could offer a better road position.

Having used the RX-8 for the majority of the 2017 season in the NZRC, the Klink Rallysport team have developed the car heavily, including the addition of a differential from a Dodge Viper to sort the reliability of the previous unit. They have also introduced a new white-based colour scheme.

The changes worked well, with van Klink taking the title of first two-wheel drive at the highly specialised Westland Rally a month ago.

That result came off the back of van Klink’s first outright rally win, driving his Citroen C2 S1600 in the Port Hills Tarmac Rally in February. Now he turns his attention to Otago, and the Gull Rally Challenge two-wheel drive class.

“Westland was a great start to the season. We certainly weren’t expecting to go as well as we did, but the times were good in the morning and we were pretty stoked to finish the job off,” says van Klink.

“It will be a bit different heading to Otago without the RX-7 and it has certainly been fun competing against some of the international stars, but the RX-8 is a huge amount of fun to drive and the fans all over the country love the sound, it wouldn’t be fair to the Otago fans to leave it at home.”

The Otago Rally kicks off with a ceremonial start in Dunedin’s Octagon on Friday 13 April from 5pm. The action kicks off the following day, with nine special stages south of Dunedin covering 145km of special stages.

The following day sees a further 137km of special stages before a ceremonial finish at the iconic Dunedin Railway station from 3pm.