The thundering Dodge Viper ‘Extreme’ driven by John Ireland and co-driver Janet Ireland has thundered into the lead of the Shannons Adelaide Rally after a competitive second day of action in the stunning Adelaide hills. After issues saw them delayed yesterday, one of the largest cars in the field proved hugely consistent through the tight Hills stages today to take a narrow rally lead at the event’s half-way point - despite having yet to win a stage. They sit 25.4 seconds ahead of a titanic scrap for second place; overnight leaders Trevor Macleod and Scott Hunter (Nissan GT-R) and the Subaru Impreza WRX Spec C of Ben Newman and Andy Sarandis swapping second place several times today with the Nissan ultimately coming out on top in a battle that went down to the final stage of the day. The Classic Competition class saw even tighter margins as the lead switched between two of the quickest cars in the field in what was a pulsating battle. After leading overnight, the Craig Haysman / Julie Boorman Triumph ceded the lead to Michael Busby and Damien Reed’s Mazda RX7 on the third stage of the day only to later reclaim it – by just 0.2 seconds heading into the final stage of Leg 2. Busby, however, was up to the task and completed the final stage 0.6 seconds quicker than the Triumph to take a less than half-a-second lead in the class overnight. Less than 30 seconds cover the top four in class after two tough days. The Challenge Class leaders remain unchanged from the opening leg; Justin Perkins and Andrien Brabbins continuing to lead Modern in their Subaru while the Steven Hevera / Stuart Cavill’s Porsche 911Sc leads the Classic Challenge class – having won every stage in the rally so far. Thursday’s stages saw the Rally head to the classic roads of the inner North-Eastern hills, including two runs past the reservoir on Chain of Ponds and a blast up the iconic switchback hairpins of Corkscrew Road. The field then headed to the South East for Bull Creek – at 10.2 kilometres the longest stage of the day – and Strath Hill, near Strathalbyn, before regrouping at the Wayville showgrounds. In total, Thursday’s stages represented 44.4 competitive kilometres and just over 244.8km in total. Friday will see the rally head back into the Hills, including the longest stage of the Event; the 18.1km Marble Hill challenge which would ultimately be a deciding stage given the current closeness of the event. Following the final stage near Sterling, the cars will regroup in the City before heading to Gouger Street for the traditional Friday evening street party which will see all the competition and tour cars on display on the closed street. MODERN COMPETITION MISTUBISHI dominated the day in Modern Competition but at the end of the day it was an American muscle car sitting on top of the leaderboard. Rebounding from their dramas yesterday, which included a penalty for dropping behind the sweep vehicle, John and Janet Ireland ultimately grabbed the Rally lead by the lunchtime regroup - relegating the Nissan GTR of Trevor Macleod and Scott Hunter to second, 2.6 seconds behind. The bright red Dodge Viper ‘Extreme’ finished either second or third in every stage today to build their leading margin throughout the seven stages contested today, taking a 25.4-second lead into the half-way point of the rally. Given they were outside the top three entering the day it has been a remarkable comeback for the Viper-driving combo. The battle for second was ferocious, however, with the former rally-leading Nissan forced to battle the Subaru Impreza WRX Spec C of Ben Newman and Andy Sarandis throughout the day. Newman held second heading into the final stage of the day, just 0.3 second splitting the pair – however Macleod’s final stage was good enough to see them jump back into second position with just 4.7 seconds now splitting them. The Mullins / Medlin Mitsubishi Lancer sits fourth in class, just 40.4 seconds behind the rally leader. Thursday was dominated by the Ben Calder / Steve Glenney Mitsubishi, the combo winning every stage today in a bid to make up for the massive time lost when their car stopped with mechanical issues yesterday. Despite their best efforts, the team remain only 15th in class and more than three minutes behind the rally lead with two days remaining. 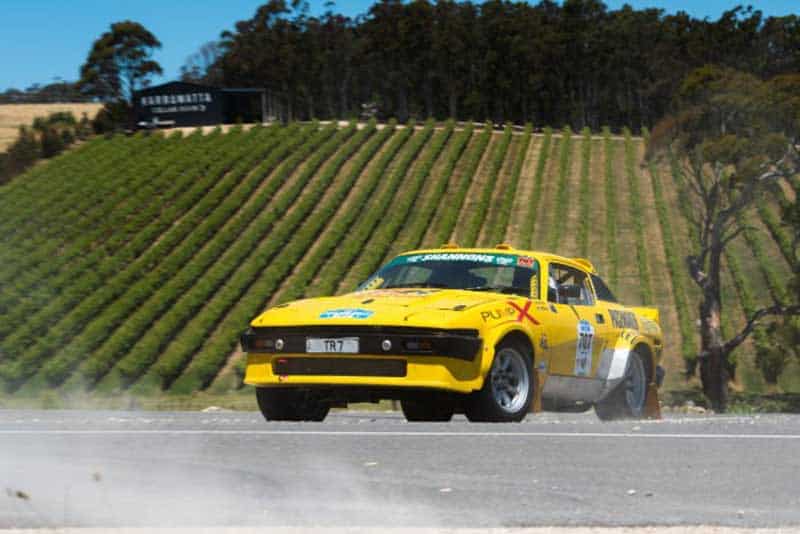 CLASSIC COMPETITION THE CLOSEST fight in the rally saw the leading scrap in Classic Competition come down to the final stage of the day – Michael Busby and Damien Reed taking the rally lead by a tiny 0.5 seconds heading into the final two days. The lead changed hands three times today in a pulsating battle that is likely to continue throughout the remaining stages. Having led overnight, Craig Haysman and Julie Boorman’s Triumph ceded the lead to the Michael Busby / Damian Reed Mazda RX7 early in the day; the latter taking a pair of back to back stage wins on SS9 (Chain of Ponds Long 1) and SS10 – the iconic Corkscrew stage to take point. They headed to the lunchtime regroup leading by 3.2 seconds. However that was just the beginning – Haysman grabbing the lead back by a tiny 0.2 seconds following a second-placed effort through SS13 (Doctors Creek), setting up a thrilling finish to the day over the 6.9-kilometre blast over the Strath Hill stage that closed out the day. There, Haysman’s 3m33.03s effort was bettered by Busby by just 0.7 seconds – the Mazda turning a 0.2 second deficit into a 0.4 second rally lead in an instant. Behind them, Tim Pryzibilla and Rick Powell (Porsche 911RS) remain well in contention, less than 20 seconds from the rally lead in class. In fact, just 30 seconds cover the top five in the most competitive class in the rally so far. Nick and Jacob Streckeisen (Porsche 944) won the most stages of anyone in class today though after issues yesterday remain more than a minute off the ultimate pace. MODERN & CLASSIC CHALLENGE THE CHALLENGE categories saw the overnight class leaders work on building comprehensive margins as the event reached its half-way point. After sweeping all five competitive stages on Wednesday, Justin Perkins and Andrien Brabbins continued to lead the Modern Challenge class however found themselves under more pressure today. They ceded several stage victories to the well-driven BMW M3 of Tim Sinclair and Karl Alexander – though dropped negligible time in the process and never lost the rally lead. The Subaru leads Modern by just under one minute heading into Friday’s stages. The battle for second was much closer, however. Troy and Colin Zytveld’s Nissan 200SX had held second overnight, however the flying BMW overhauled them on SS11 (Anstey’s Hill 2). The BMW retained the spot for the subsequent stage before the Zytveld’s regained second on SS13, the penultimate stage of the day. They remained there following a strong run through final stage of the day near Stathalbyn, with just over three seconds between the pair heading into leg three on Friday. Steven Hevera and Stuart Cavill’s Porsche 911Sc led Classic Challenge by nearly 40 seconds overnight, and only extended that margin as day two of the event evolved. Their lead over Karl Von Sanden and Alexander Visintin’s Porsche 944 had grown to one minute following SS9 (Chain of Ponds 1), the second stage of the day and it only got bigger from there - an undefeated streak of stage wins continuing throughout the day with the Porsche now leading by more than 1 minute 47 seconds. They have won every stage of the rally so far, while Von Sanden’s Porsche holds a more than 1 minute 20 second margin over third-place in Classic, Ross and Emma Smith third in their Nissan 300ZX. DAY 2 LEADERBOARD / SHANNONS ADELAIDE RALLY MODERN COMPETITON 1.    Ireland / Ireland (Dodge Viper) 26.56.9