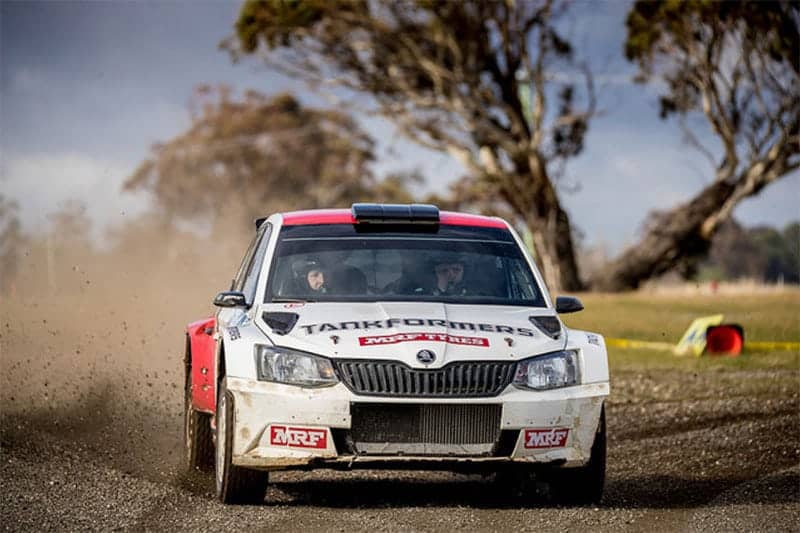 The new Subaru Rally Tasmania provided a fantastic result for WA co-drivers in challenging conditions with both Ben Searcy and Toni Feaver getting podium wins.

The 35-strong field competing in the fourth round of the CAMS Australian Rally Championship encountered slippery conditions in the forests around Launceston.

Eli Evans (VIC) and Ben Searcy (WA) in the Tankformers’ Skoda Fabia R5 dominated the event, posting the fastest time in 14 of the 17 special stages to take home their third outright win for the season.

Searcy said that despite tough conditions it was a tremendous event.

“To set the fastest time on almost all the stages I believe is testimony to the ability of the car, team and crew.”

There was a moment for the team when their win was in doubt. On the second day the pair overshot a corner in the first stage and found themselves off the road and unable to restart their vehicle.

The team were issued an infringement from the Clerk of Course for receiving assistance on a special stage, which carried the penalty of exclusion from that stage. The infringement was later withdrawn after a post-event steward’s hearing.

Adrian Coppin (QLD) and Toni Feaver (WA) in the Innate Motorsport and Events Skoda Fabia R5 were locked in a battle for second with Molly Taylor (NSW) and Malcolm Read (NZ) in the Subaru do STi. In the end, Taylor and Read pipped Coppin and Feaver for second place.

“We finished equal second on points, but Molly had more stage wins on the count back,” said Feaver. “We had a great battle with Molly and Malcolm all Sunday, and in the end we had their measure.

“Adrian was a dream to work with, we both learnt a lot and gelled well. Unfortunately that event was Adrian’s last ARC for the year. I would hope to do some more events with Adrian, he is another promising talent.”

It was also a successful weekend for Perth based business Race Torque Engineering, who prepared both the Skoda Fabia R5s.

The next round of the CAMS Australian Rally Championship will be the Adelaide Hills Rally on September 21 – 23.

Western Australian rally competitors are currently preparing for the Experts Cup which will be held on September 15 in the forests around Collie. The Service Park and Rally HQ will be located on Collie Oval, off Coombes Street, Collie.