WA title going down to the wire after O’Dowd troubles 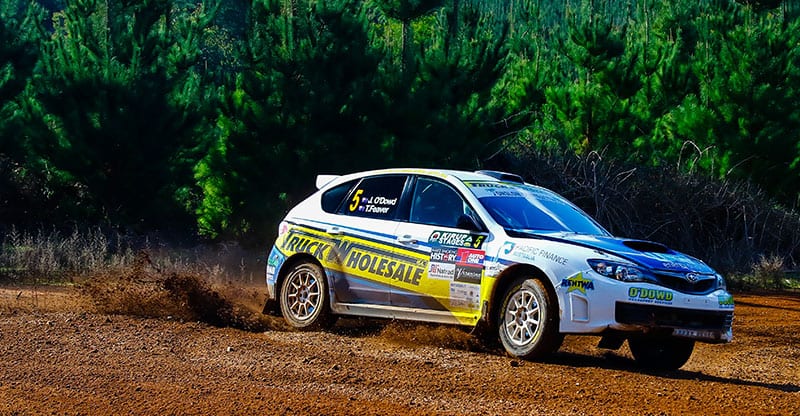 Early problems for John O’Dowd and the Truck Wholesale WA Subaru WRX STI has seen him lose valuable championship points and has brought the West Australian Rally Championship race ‘down to the wire’ with just one round to go.

A heavy landing after a large jump on the opening stage of the Wheels on Yirrigan Kumho Tyre Kirup Stages rally caused plenty of damage to O’Dowd’s Subaru. Even so, he won the two opening stages before first service.

The Maximum Motorsport team repaired the damage during service, and at the start of the third stage O’Dowd and co-driver Toni Feaver held a 17 second lead over their championship rival Stephen Oxley.

But stage three, Big Zag 1, held plenty of drama for O’Dowd and Feaver.

“‘Eventful’ is the best way I can describe this rally”, O’Dowd commented. “We don’t know if there was some additional damage from the heavy landing on stage one, but on stage three we had constant throttle problems and the car kept cutting out.”

Over the course of the 24km stage, O’Dowd lost four and half minutes to Oxley, dropping him down to the leaderboard to eighth outright.

With Oxley now out in front and with more than a two minute lead over Kody Reynolds, O’Dowd and Feaver staged an incredible comeback. On stage four they beat Oxley by two seconds, then 32 seconds on stage five and were 11 seconds quicker over the final test.

By the end of stage six they had climbed back up the leaderboard, won five of six stages, and had captured third place outright, reducing the points lost to the eventual winner Oxley.

“It wasn’t the outcome we’d hoped for. But we fought a pretty good ‘rear-guard’ action after stage three. We didn’t let the throttle problems get to us. Toni and I, and the Maximum Motorsport team, just kept working away. We didn’t get the result we could have, but we minimised the points lost to Stephen and we’re still in the hunt for the championship title”.

O’Dowd continues to lead the WARC series on 304 points with Stephen Oxley on 286 and Kody Reynolds on 219 (unofficial points results).