39 years later, Russell Brookes will return to Holland to collect the ceremonial awards he should have been given after winning the famous Tulip Rally, but which the organisers failed to provide because of an economic crisis.

Russell Brookes (left) and Peter Bryant at the 1978 Tulip Rally. (Photo: Martin Holmes)His contemporary sponsor Andrews Heat for Hire (these days the active sponsor for Chris Ingram) is arranging for a replica car to be taken to Holland for the occasion.

In 1978 Brookes and his co-driver, Peter Bryant, were given bunches of tulips instead of proper awards.

For the second time, Hyundai’s reserve co-driver Sebastian Marshall steps in. He will now replace John Kennard in this weekend’s Portugal Rally as Hayden Paddon’s co-driver.

John has been experiencing the effect of an old injury, but still hopes to make his active co-driving finale in Finland this year.

Rally winner Fabian Kreim has been fined Euros 5000 and had his championship points on the event cancelled because he failed to stop when Christian Riedemann crashed on the Hessen ADAC Vogelsberg Rally. 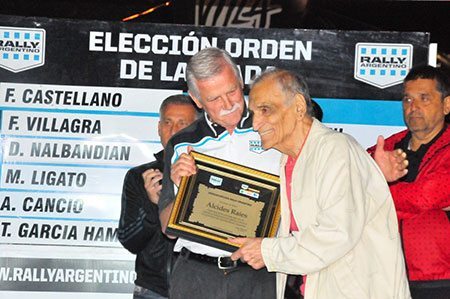 Alcides Raies in 2016.The legendary Argentine motorsports man, Alcides Raies, died on May 2nd, after a long illness.

In his own career, he was a racing motorcyclist, an aviator, formula 3 and TC driver and motorsport promoter. Later he became respected as the father of Gabriel, Juan Pablo and Marcelo, all champion rally drivers.

Dramatic end for the week long Morocco Historic Rally when the leader Philippe Gache retired with a broken axle on his Mazda RX7, gifting victory to Bernard Barrile’s Talbot Sunbeam Lotus on the final stage.

Earlier in the event there was a sad accident when Gerard Brianti crashed his Porsche and lost his life. Brianti was well respected as the Vice-President of Monaco’s football club.

The popular historic car R.A.C Rally, traditionally based in North England, strikes new routes this year, with a loop into Wales.

A notably feature will be a short spectator stage at the legendary English Shelsley Walsh hillclimb – to be run downhill. Shelsley Walsh is Britain’s oldest motorsport venue.

The FIA’s contracted R4-Kit supplier Oreca has announced the first experimental Kit will be based around the little known Toyota Etios R5, a car developed and run in Paraguay, but which was originally designed by the French, former Ralliart engineer Olivier Maroselli.

A sad demise for a passionate WRC favourite

Why Japan should remain on the WRC calendar