Jan Kopecky maintained his unbroken record of wins this year in national championship rallying when he won the Cesky Krumlov Rally in Czech Republic.

Jan Kopecky maintained his unbeaten run in 2017.The clash of dates meant he could not contest Rally of Portugal, which he had to enter to be eligible for winning the WRC2.

He continues a campaign of WRC2 events, aimed at tactically reducing the chance for rivals to the Skoda team to scoring points. Kopecky is entered in the next WRC round – Sardinia.

The coming weekend’s Australian round of the FIA Asia Pacific Championship returns to Canberra after a late location change from the planned event in Queensland. 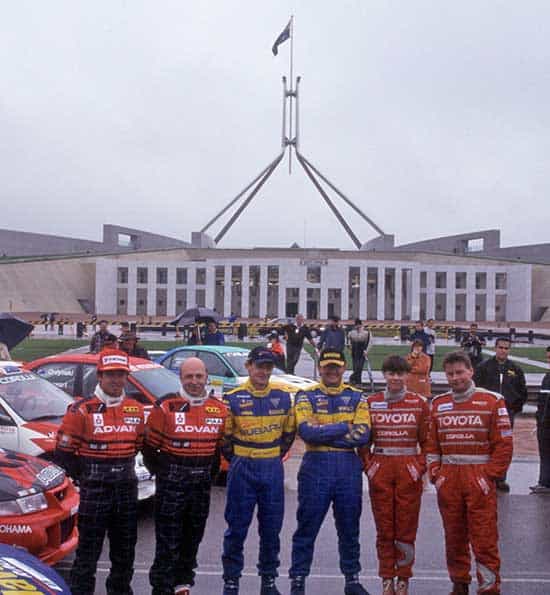 Katsu Taguchi, Derek Ringer, Mark Stacey, Possum Bourne, Coral Taylor and Neal Bates at the Rally of Canberra in 2000.The APRC event was last held in Canberra in 2008. The event runs concurrently with a round of the Australian championship which is under special national rules.

Surprise news last week from France when Anthony Puppo won the French championship Rallye d'Antibes in his first ever rally in the series!

Until now Puppo was only competing in Coupe de France (second league championship), but decided to move to the highest level and won!

Many people say that Yoann Bonato, Quentin Giordano and Charles Martin are among the most talented drivers in France, but it was the unknown Puppo who beat them all!

Entry details for WRC round 7 (Sardinia) were given during Rally of Portugal with 16 World Rally Cars out of the 55 entries.

Special interest is a new WRC Trophy entry, this time Yazeed Al Rahji. Skoda’s WRC2 challenge of avoiding its team drivers competing against each other continues, with another event for Andreas Mikkelsen.