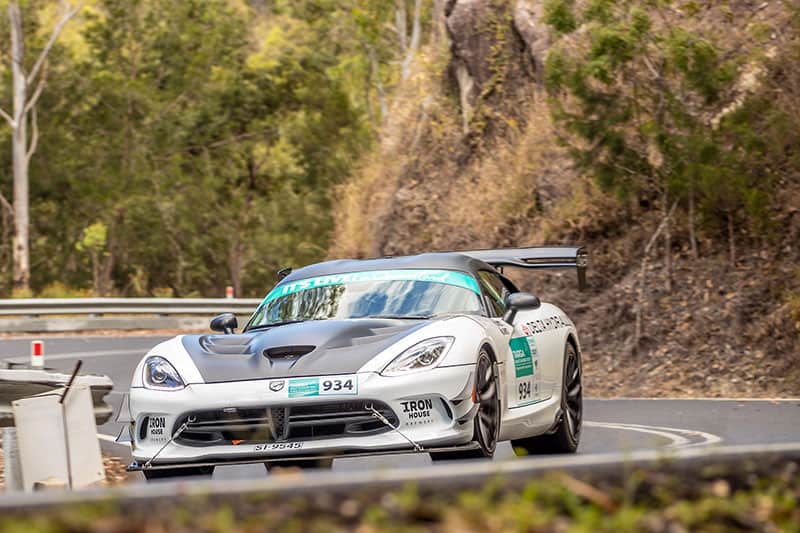 Stokell and topline co-driver Kate Catford shot out of the gates, leading the opening three stages in their Lotus Exige Sport 350.

The Whites, inaugural winners of Targa Great Barrier Reef, found themselves in the rare position of having to chase after the opening three tests of the event.

However White and his co-driver uncle John White erased a 10-second deficit on TS 4, the 11.24km Lake Morris run, to assume a three second lead.

That lead then increased to six seconds, the Whites maintaining their strong push on the Copperlode stage to finish the day with a narrow buffer.

The David and Goliath showdown for Modern Outright and It’s Live in Queensland GT2 class looks set to intensify during Leg 2 of the tarmac rally on new stages around the Mareeba area tomorrow.

Jeff Morton and Daymon Nicoli (Lotus Exige) remain in contention 1min18s back in third outright. The same three fill the top spots in the GT2 class.

White was happy he got back to the lead after conceding the early running to Stokell.

“We were a bit slow starting and then on the way back down the Gillies Range we still lost a bit of ground so it formed a bit of an unacceptable pattern,” White said.

“We had a real crack up the Copperlode Dam and that is probably one of the most exciting drives that John and I have had for a while.

“You can DNF at almost any corner on that stage but we managed to nail it and it was really cool. We got a bit more back on the way down Copperlode and that was enough to put a fire in the belly.

“The car is working really good and I’m looking forward to the next few days.”

There is tight battle raging in Cairns Regional Council GT4 with the Nissans of Geoffrey and Toni Hewitt and Tony Quinn and Dale Moscatt sharing top spot. Luke Anear and Alan Stephenson are just eight seconds back in third place.

In the Shannons Classic GT, Mick Downey and Jarrod Van Den Akker have kicked to a clear lead.

His main competition, the 1970 Datsun 240Z of Jon and Gina Siddins, struck issues early on and withdrew from the day.

In Classic Handicap, the consistent Peter Gluskie and Samantha Winter have started strongly in their 1985 BMW 325i. The 2018 class winners Ashley Yelds and Charlie Hughes (Volvo 122s) are 31 seconds in arrears. Nik Prieston and Dylan Braithwaite (1975 Fiat Abarth Rallye) are third, a further 1 second back.

Nissan Skyline regulars Liam and Larry Howarth are holding sway at the top of Dutton Garage Early Modern while Cary White/David McMillan (Subaru Impreza) are just under two minutes away in second.

Peter and Tristan Taylor (Lotus Elise) are again locked in a close battle with Darryl and Peter Marshall (Ford Falcon Pursuit Ute) for honours in the points-based TSD Trophy class.

The Taylors ended the day on three points with the Marshalls on eight points while Flynn Dunkerton/Nina Dalla Pozza (Subaru Impreza) are third on 29 points.

Day 2 takes the field across a further five stages before returning to Targa Fest activities on The Esplanade in Cairns where the locals will have a chance to get up close to the cars in what is conservatively valued at $25 million worth of automotive history.