In 2018, fans of the World Rally Championship were spoilt with the introduction of WRC All Live. This groundbreaking platform has changed the way we watch rallying.

Presenter Julian Porter spoke at length at the RallySport Magazine tour dinner before Rally Australia, and highlighted a number of the features and challenges of bringing this new platform to the people.

The WRC aeroplane is at the centre of this television production. It travels to every round, and is neatly set up to provide the production crew with everything they need. “We have an aeroplane that we bring to every rally,” Porter says. “It took six days to get it here (to Australia). “We have to run a certain plane to guarantee the pictures. We can't turn up in Australia and say ‘we want to hire a plane’ because our stuff might not fit.” The plane houses all the key instruments for the live images. https://twitter.com/nepfinland/status/1063989093804036096 “All the repeaters for the onboard cameras, the timing, the tracking, everything (is on board).” The plane must stay within range of all cameras to be effective, and to do so, must travel in circles above the live stage. If the plane is not in range, there is simply no way the pictures can be broadcast.

“It has a 10 kilometre footprint. “As long as they’re inside our radius, we can see them wherever they are. We can find out what they’re doing and things like that. 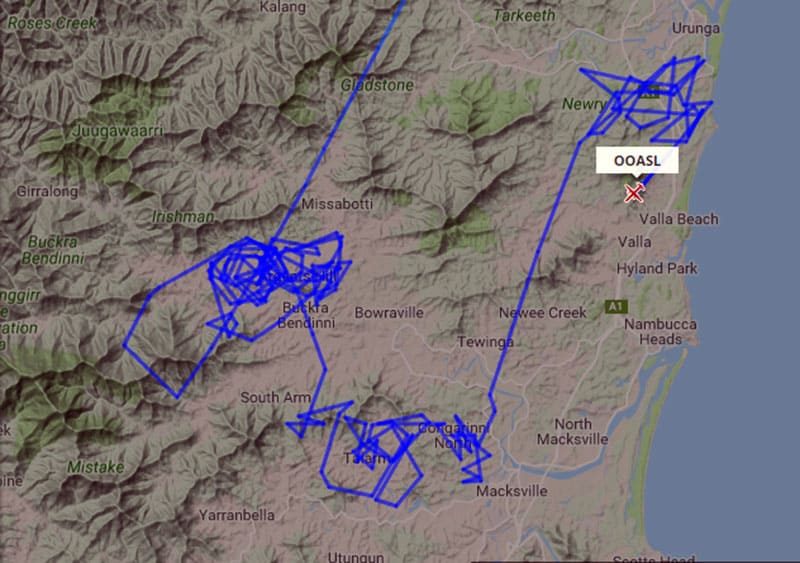 A three year old's scribble? No, this is the flight path of WRC All Live's plane at Rally Australia.

“When you go to Corsica, and you’ve got a 48km stage which goes over the top of a mountain, we can only cover 10km of it” This causes a dilemma for the producers as to who they wish to follow. Yes, they may want to be focussing on the first few cars of the stage, but if the championship leader has an issue at the start of the stage, the plane must fly back to that part of the stage to show it. 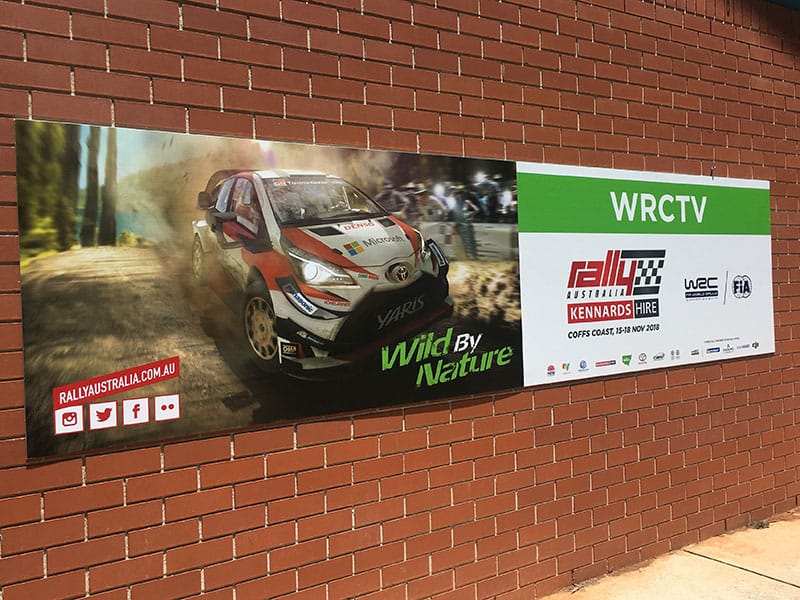 Porter says that this is the reasoning for when All Live misses a handful of cars without warning. “Basically they’ve disappeared out of our footprint and we’re repositioning the plane to get the best of what’s going on,” he explains. “We can see all cameras that we have (on the studio monitors), but we can only transmit three at a time. We have five transmitters that we can put out. “One is for the stage end interviews, one is the helicopter, and then three for on-boards.”

As there are only limited cameras they can immediately switch to, there is often instances where incidents cannot be covered live.

“The director can see all the on-boards, but if he sees something happening in a car that we’re not covering, he then has to ‘get out’ of another car. https://twitter.com/nepfinland/status/1063884135393947648 “He has to shut down that car’s onboard system.” When turned off, the cameras are still recording locally in the car, but they are not able to transmit onto the live coverage. If an incident happens, the director has to decide what on-board cameras he wants to have transmitting footage, and which cameras he wants to shut down, keeping in mind who is near the finish and who they plan to cover next. “These things are happening in tenths of a second,” Porter explains.

“You’ll see me and Kiri or Abi on the screen and it looks like it's going brilliantly, but the amount of chaos going on behind the scenes is quite interesting."

Porter explained how WRC2 is a difficult class to cover amongst all the top-line WRC action. “We normally have 13 World Rally Cars - we have 15 camera kits, which only leaves us two for WRC2. 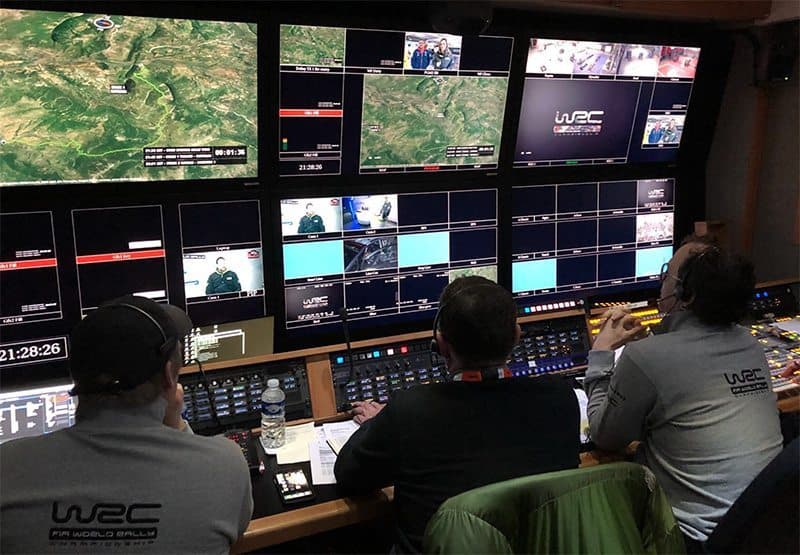 There are often over 100 screens at the All Live studio.

“There’s no point putting an onboard camera kit in the 15th car in WRC2 because we’ll never see it. It (the cameras) always goes in the first two - the next two cars after the last World Rally Cars, because there’s at least a chance of them getting on the TV. “Finland was a bit of an exception because there was (Kalle) Rovanpera. “He was eighth on the road, but we kind of knew that Rovanpera would end up in the game at some point.” You may think that the television team may be able to change the cameras depending on the WRC2 standings, but this is not the case. “It’s not something we can change every night because it's all to do with wiring harnesses.”

The cameras are an expensive object, three of which go in each car, and as is the case in all high class motorsport, every object is a chance to save weight. 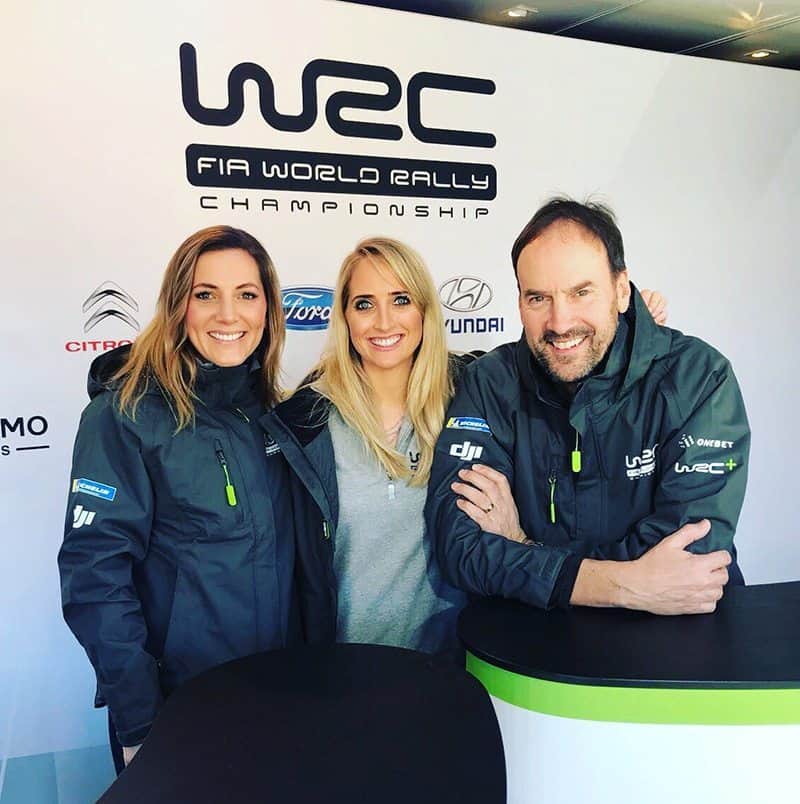 “In teams' wiring looms, they put in our onboard camera kit. They make their own wires for our camera kits simply because they don’t want our weight. “They want their weight and they want their cables,” he says. “The only cables that we have are the cables from their connector into our camera. Virtually the rest of it is all of their stuff.” It’s not just weight where manufacturer teams use the television equipment to their advantage. “We discuss with them where they want the cameras,” Porter says.

“If you look at the Hyundais, there’s like a funny teardrop shape where the door mirrors are - that’s a housing for our onboard camera.

“When you look at it, it’s the most aerodynamic onboard camera housing I’ve ever seen because it drafts air into the door mirrors, which drafts air down the rear wheel arches,” he laughs. 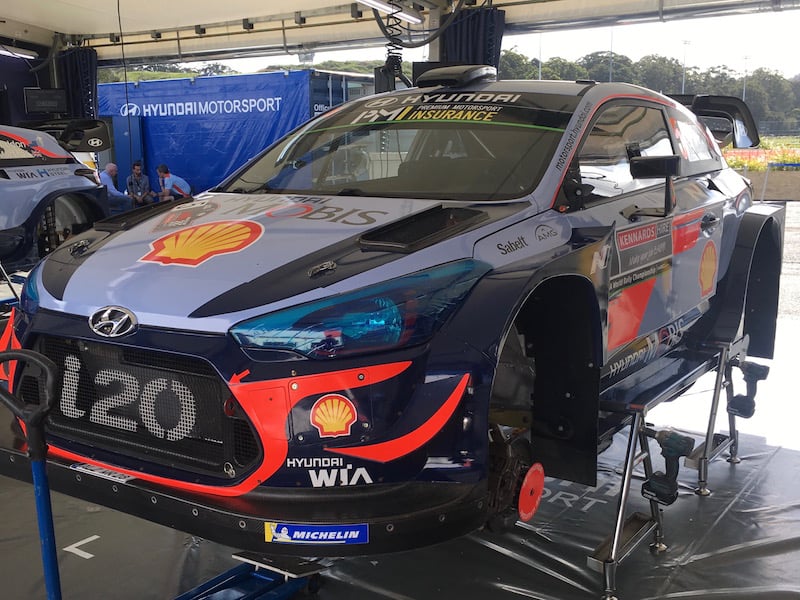 The Hyundai i20 Coupe WRC car at Rally Australia

There was generally a bumper camera on Sebastien Ogier’s Ford Fiesta, but it was required to be removed for Finland as it was disturbing the airflow over the car’s front bumper. “On the test, they put a dummy camera in and they could see a difference in the airflow on the front bumper. “On slower rallies we can have it in there, but on Finland we had to remove it and put it somewhere else.” There have also been instances where roof top cameras were required to be moved due to a disturbance of airflow over the rear spoiler of World Rally Cars. “At the end of the day, we try and work with the teams,” Porter concluded. 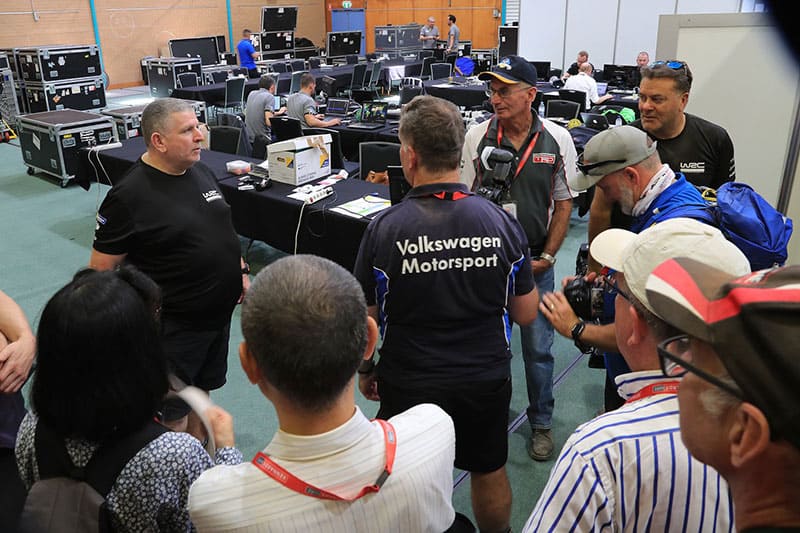 RallySport Mag's tour group were shown over the WRC All Live production area prior to Rally Australia. Photo: John Crouch