New Zealand rally driver, Michael Young, is set to continue his international rallying quest as he tackles the 2016 ARK Rally of Toya in Japan with major sponsor Cusco in a new shape Subaru WRX this weekend.

The new Subaru, built by Cusco in Japan, is a major opportunity for Young to show his talent on the Japanese Rally Championship circuit before returning to other major international events.

“Cusco invited me to come along and of course I had to say yes. Rallying in other countries is something I love doing, and being in a brand new Cusco car makes it even better,” said Young.

The two-day 65 kilometre event is shorter than many other rallies Young competes in though he said he is looking forward to the different rally format.

“It’s almost like a sprint,” explained Young, “that’s just how they do it over there. I haven’t done this particular event before but I’m really looking forward to the challenge.”

Young will be joined by local Japanese co-driver Takahiro Yasui who has competed against Young for several years in the Asian rounds of the Asia Pacific Rally Championship (APRC) where he normally competes.

“I know Yasui-san well and he’s a very good co-driver by all accounts. He’s been a Cusco Racing team-mate of ours in the past, and to me he’s the Japanese version of Malcolm [Read] so it should be good,” said Young. 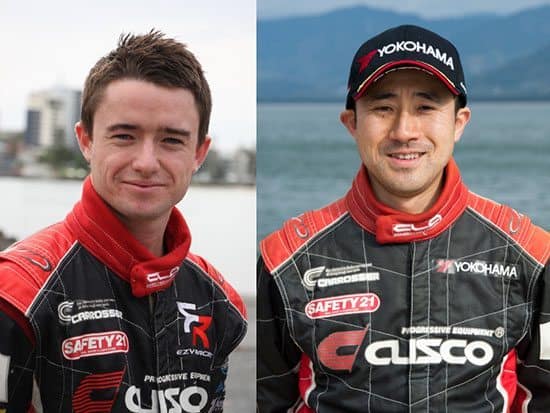 Mike Young (left) and team-mate Takahiro Yasui.The 23-year-old will need to draw on all of Yasui’s experience, as the roads are different to the other Japanese roads he has competed on in the past despite the rally being held in the same region; in northern Japan on the island of Hokkaido.

“From what I’ve been told, this event is more twisty than Rally Hokkaido [APRC] though I’m sure the roads will cut up [develop ruts] like they do in Obihiro.

“It’s a unique driving style to Japan where you drive the car on rutted roads. It’s just like driving on a train track; you put the front wheels in and it pulls you around. Get it right, and you can fly around the corner but get it wrong and it’ll throw you out,” explained Young.

The newly formed duo will be joined by dozens of Mike Young Motorsport and Cusco fans, with many fans making the trek to the event only to meet Young.

“The fans are so passionate in Japan, it’s just awesome. As soon as the entry list came out, the MYM [Mike Young Motorsport] supporters club announced they would travel to Toya just to see us. For me that’s commitment to the max and I really appreciate the support, so I better put on a good show for them,” laughed Young.

Although he maintains his main goal is simply finishing the event for Cusco. “For me, there is only one goal this weekend, and that’s to do a good job for Cusco. They have invited me to Japan so I want to give them a finish.”

Keep up to date throughout the weekend via Young’s Facebook page:  https://www.facebook.com/MikeYoungMotorsport