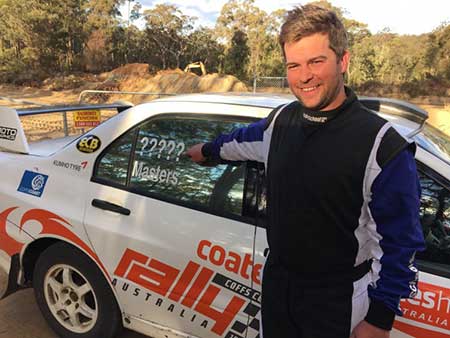 A young concreter with ambitions to be a rally driver has gone from zero to hero with a $50,000 prize to compete at the sport’s ultimate level, the FIA World Rally Championship, on the Coffs Coast next month.

Adam Bensch, 31, from Deniliquin in south-western New South Wales, was one of more than 3000 would-be rally stars from across Australia who entered a “Drive of a Lifetime at Coates Hire Rally Australia” competition run on Channel Ten’s RPM show and tenplay.com.au.

Adam Bench from Deniliquin (NSW) will have his name on the window after winning a shootout to compete at Coates Hire Rally Australia.He won a fully supported entry in the East Coast Bullbars Australian Rally Championship, part of the Coates Hire Rally Australia world championship round on the Coffs Coast on 10-13 September. Adam will be driving a Mitsubishi Lancer Evo VII rally car run by driver training company RallySchool.

The prize will put Adam in company with the fastest rally drivers on the planet, including double world champion Sébastien Ogier and Australian champions Eli Evans, Scott Pedder and Simon Evans. He will tackle more than 300 kilometres of demanding competition stages in the Coffs Coast hinterland.

Potential drivers entered the TV competition giving details of their interest in motorsport and why they wanted to win. RallySchool’s Michael Ryan and his team of pro-driver instructors selected nine finalists for a “shootout” in Sydney.

“It’s a day I will never forget and I still can’t believe I’ve won, but I’m going full-on from now to do my best to do a good job,” Adam said.

“I’ve stepped up my fitness training and I’ve already booked to do two days of training with RallySchool.

“This is something I want to keep doing now I have been given this amazing opportunity. I don’t want to throw it away by trying to be a hero and doing something stupid.

“I’ve bought cars in the past with the aim of doing some rallying, but never really had the time or money to do them up.

“I’m planning to go as fast as I can within my own abilities and use the weekend to apply everything I’ve learned from Michael and his team, as well as learning more during the event – I just can’t wait!”

Michael Ryan said while Adam had no rally driving experience, he showed solid understanding of the sport and determination to make his mark: he drove nearly nine hours each way to be part of the shootout.

“Afterwards I discovered he had done a one-day course with us at RallySchool about five years ago. I apparently singled him out on that day as catching the attention of the instructors then, for all the right reasons,” Ryan said.

“All the entrants were tested on their understanding of how the whole process goes together, including how to make pace notes while on reconnaissance, because the winner would be making their own notes from scratch with our professional co-driver, Darren Masters.

“It was an elimination process through a series of challenges and assessments and Adam deserved to win. He’s a great guy and I think he will do a good job on the event.

“A lot of our customers come simply for the experience when they book for a day of tuition with us. Very few of them intend going further. But we all love the sport and love sharing it and introducing new people to it, so it’s fantastic to do something like this and hopefully help someone get a start in competition.”

.The Drive of a Lifetime prize includes a fully equipped rally car, co-driver, travel and accommodation for the winner and a companion, plus all associated costs such as service crew, entry fee, fuel, tyres and meals.

Adam’s wife Sarah, who was not a rally fan until being a spectator at the shootout – and having a hot lap with Australian international rally driver Molly Taylor – will join him at Coffs Harbour for what he calls the ultimate dream come true.

He is a member of the Deniliquin Sporting Car Club.