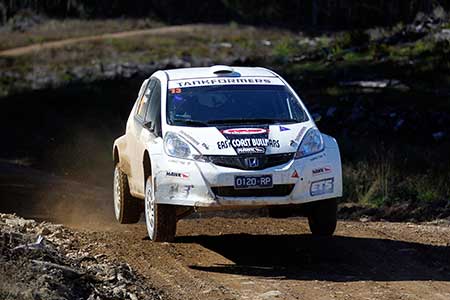 Simon Evans heads the ARC entry list for Coates Hire Rally Australia.Australian drivers are able to enter either the outright World Rally Championship and be listed amongst the likes of Sebastien Ogier, Kris Meeke and Hayden Paddon, or the ECB ARC component of the rally, with a total of 47 local drivers taking part in the three-day event.

A fierce battle is sure to ensue amongst the National 4WD Series competitors, led by NSW chargers Andrew Penny (Subaru), Justin Hatton (Mitsubishi) and Peter Roberts (Mitsubishi) but they will have to keep an eye behind them for a fired up Justin Dowel in his spectacular Hyundai i20 ‘Prototype’.

Entries as far afield as South Australia for Guy Tyler (Mitsubishi) and Tasmania’s Marcus Walkem (Mitsubishi) will give fans from across the country something to cheer for, with Mick Patton looking to defend his current points advantage against all challengers in the 4WD series in his Mitsubishi Lancer Evo X.

A full compliment of Classic competitors will also take to the Coffs Harbour stages; their rear-wheel drives providing a spectacular point of difference to the high-tech World Rally Cars at the head of the field.

Neal Bates and Clay Badenoch will tussle it out in their matching Toyota Celica’s for vital Championship points, while being joined in the fray by the likes of Brett Stephens (Nissan Bluebird), Ivan Voevodin (Mazda RX7), Joshua Hilton (Toyota Corolla KE35), Phillip Casper (Ford Escort) and the incredible Audi Quattro S1 replica of Mal Keough.

Rounding out the action will be the Polaris versus Can-Am combatants, with the Polaris charge led by multiple Australian Champion Cody Crocker and Iain Hughes, while in the Can-Am corner Michael Guest and Nathan Chivers.

Coates Hire Rally Australia, round 10 of the FIA World Rally Championship and round 4 of the East Coast Bullbars Australian Rally Championship, starts on Thursday 10th September in Coffs Harbour and continues through until Sunday 13th.