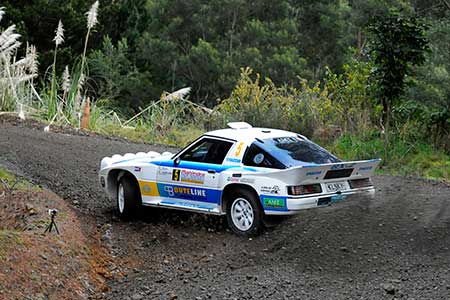 Marcus van Klink is rueing what might have been when a differential failure ended his charge on stage six of the Mahindra Goldrush Rally Coromandel, the penultimate round of the Brian Green Property Group New Zealand Rally Championship.

With the points scoring format in the NZRC, van Klink and co-driver Dave Neill headed to the Whitianga based event only able to add one point to their score before the final round. Despite that, the pair were keen to battle for the honour of top two-wheel drive car without the pressure of scoring championship points.

With his results to date, van Klink was a part of the top five road order draw, the first two wheel drive car to do so since it was introduced to the championship by the end of the draw, found he would start the stages fifth on the road, well before any of his two-wheel drive rivals.

A fast stage time in special stage three was interrupted with a spin and although he was back on the pace in stage four, was the top Historic but had slipped to third two-wheel drive car.

Things took a turn for the worse in the next loop of stages, when a puncture in stage five became insignificant as the differential cried enough in stage six, leaving the Mazda out of the rally.

“It was a tough day for us, we could certainly see that we were losing time being so far up the road, but in the end it all came to nothing,” said van Klink. “Better it happened here than Wairarapa though, so we’ll get ready to wrap up title number three there.”

Klink Rallysport now turn their attention to the final NZRC round for the year, Rally Wairarapa, on October 3.