40 years young: the WRC celebrates a milestone in 2019

1979 was a landmark year in the World Rally Championship, as for the first time drivers gained world level recognition in the sport.  It’s now 40 years since the WRC officially started, and RallySport Magazine’s Martin Holmes takes a look back to where it all began …… * * * * * In 1953 the European Rally Championship, then the sport's most important series, had been centred around the drivers. In 1970, the predecessors of the FIA launched the International Rally Manufacturers, in 1973 this was named the World Championship for Manufacturers, and in 1977 and 1978 there was an experimental global FIA Cup for Rally Drivers. This covered mostly existing WRC events, but with some rounds further flung.  In 1979 the world series for Drivers was launched, sometimes with an occasional extra event added. 1978 had ended with Fiat as the championship make and Markku the new World Cup winner.  The surprise, however, was that Fiat were making a break in 1979 from the flat out intense competition of the WRC, and concentrated on developing the Abarth 131 instead, for regional and national competition activity. Hopes for continued Fiat WRC successes were restricted by a reduced programme of events and drivers, though Alen scored a second Fiat win in Finland. In the world of the WRC, the 1979 title race now lay between Ford and Datsun, with Fiat lucky to end up in third, close behind Datsun at the end of the year after Datsun drivers were excluded for engine offences in New Zealand. In the new Drivers’ series there were really only two drivers in the running, Bjorn Waldegard and Hannu Mikkola. 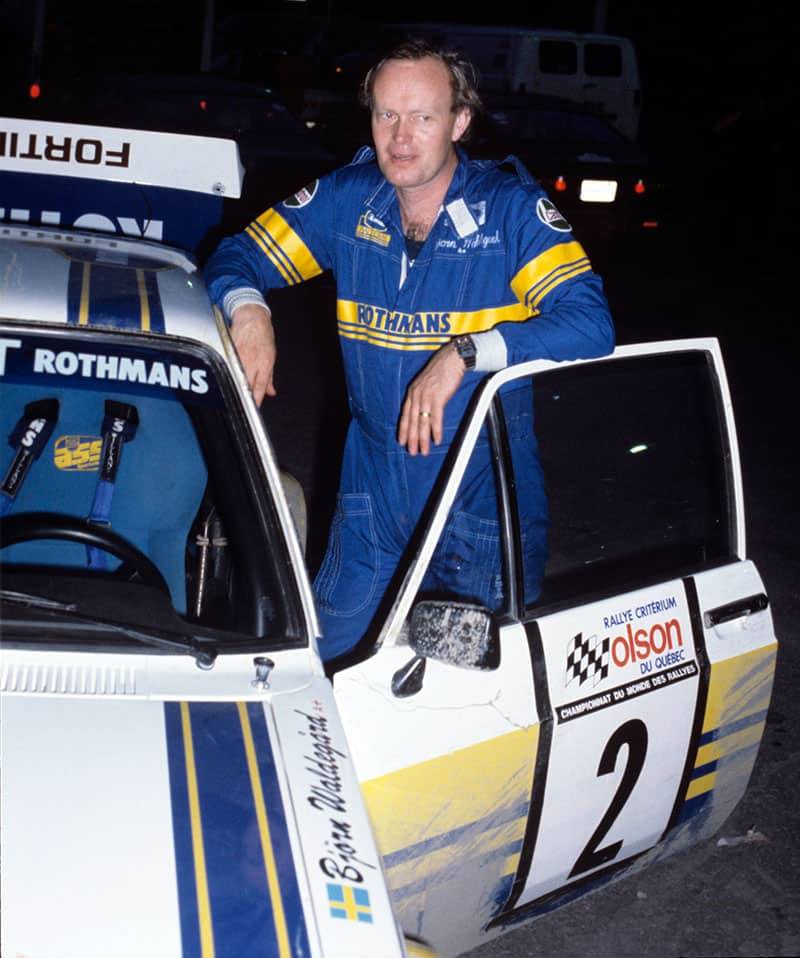 In those days teams were not commanded to offer exclusive contracts, so when Ford decided against competing that year on the Kenyan Safari Rally, an event which favoured Mercedes and Datsun, both Waldegard and Mikkola accepted the opportunities to drive on the Safari, and then also the Ivory Coast Rally, for Mercedes. Both Mikkola and Waldegard had seven event programmes with Ford.  Both drivers were scheduled to miss the mixed surfaced Sanremo and the all-asphalt Corsica rallies, always the same events, except only Mikkola entered New Zealand (on his honeymoon!) and only Waldegard entered Canada.

Ford were very cautious about rallying on asphalt, and Sanremo included 480km of asphalt, on roads which were highly specialised and very unsuitable for the Escorts with their live rear axles.

The 1979 season was confusing for the two rival drivers. Mikkola won four events but retired in Greece and Finland (both due to cylinder head gasket failure), and no dropped scores, starting slowly with fifth places on both Monte Carlo and Sweden. In Sweden both Ford drivers lost time off the road, though Waldegard climbed back to second.  Waldegard only won two events, with two dropped scores.  He had a heart stopping disappointment in Monte Carlo when a fallen rock on the penultimate stage forced him to stop and move it out of the way. In Portugal Mikkola beat Waldegard 1-2, in the Ivory Coast it was the other way around. 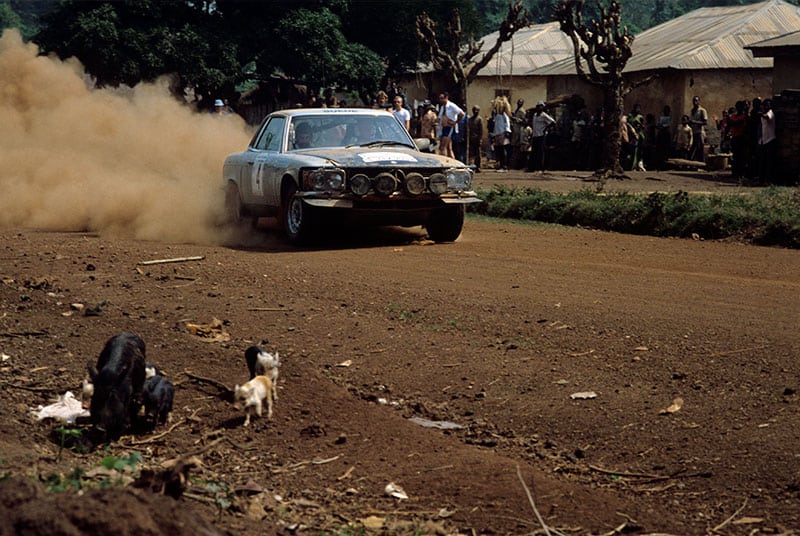 Waldegard even drove a Mercedes in 1979, in the Ivory Coast Rally. Photo: Martin Holmes

Although both won their stand-alone events, the championship points at the end of the Canadian event saw Bjorn leading Hannu by 32 points (that year 20 points came from winning, 15 for second), with only two events to come. Both were to drive Fords in Britain and Mercedes in Ivory Coast.  Mikkola did his best, winning both his remaining rallies, benefitting from Waldegard’s very troublesome run in Britain as he finished ninth overall in a car the strike-bound British team borrowed from a private team, which suffered transmission trouble. Mikkola then won in Africa, with Waldegard clinching the title by finishing second, but one critical point ahead in the championship.

The 1979 season started with it being known that Ford would retire from the WRC at the end of the year when the rear-drive Escort ended its mass production days, though historic rally car suppliers are still building versions of the car 40 years later!

Nonetheless, the team embarked on their most ambitious programme for many years in 1979. Mercedes continued rallying into 1980 and suddenly changed plans and pulled out of the WRC at the end of the year.  Even on the Air Afrique flight from Abidjan back to Paris after the 1980 Ivory Coast event, the Mercedes team director, Erich Waxemberger, spent the whole flight planning his team’s 1981 plans, which sadly were never going to happen. Their contracted driver, Walter Rohrl, had told the German media the 1981 Mercedes was not a sure-fire winner.  Rohrl and his media colleagues had shot themselves in the feet. Waldegard and Mikkola had a mixture of teams to drive for in 1980 then went their separate ways in 1981.  Mikkola entered the Audi age, and Waldegard spent his future with Toyota on African events. 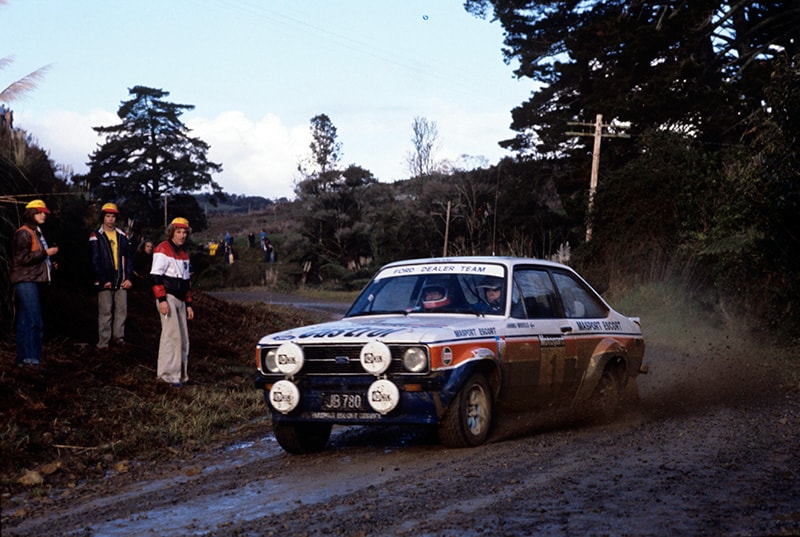 There was still life in the Fiat, the next year they were back in full force, winning both the Manufacturers’ title, while their driver, Walter Rohrl, succeeded Waldegard to the Drivers’ title.

As an insight into the primitive world of WRC rallying 40 years ago, the season finished only 11 days before Christmas.

This in pre-internet days was a nightmare situation for the media, most of whom also would not have been aware that championship rules dropped certain lower rated scores. The highly-respected Automobile Year annual book had a merciful escape from disgrace.  I received by mail from printers in Europe my contributor’s copy four days after the end of the Ivory Coast Rally, and there was a bold feature story headline that Waldegard had become the inaugural World Rally Driver Champion. How did they do this? Eventually I asked the Editor, who said that Waldegard was so far in the lead of the series on closing for press that printing that headline seemed a safe bet. He did not know about the dropped scores rule, and the FIA in those days left the media to work things out by themselves.  Unlike Mercedes, it all came right for the media in the end!