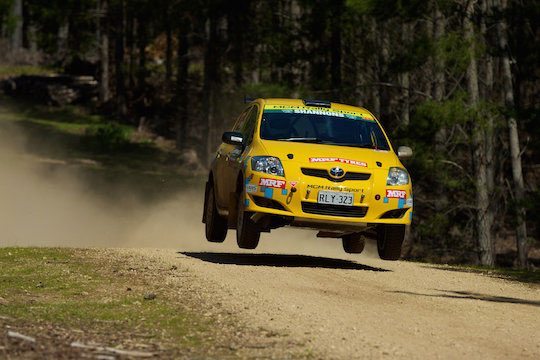 Stephen Mee will contest the ARC2 final at Rally Australia in November.

Six CAMS Australian Rally Championship 2 (ARC2) teams have been handed their ticket to the winner-takes-all final on the world stage at Kennards Hire Rally Australia in November.

In the ARC2 four-wheel-drive class it was Contel Mobile Communications’ Craig Brooks who finished top of the table after grabbing a swag of points along with his first ARC podium at Lightforce Rally SA.

Australian Truck Performance’s Tony Sullens hung on to second in the pointscore and Maximum Motorsport’s Brad Markovic, who missed Lightforce Rally SA due to recent back surgery, had enough points to secure third.

In the two-wheel-drive standings, McM Rallysport’s Stephen Mee (pictured above) battled broken drive shafts and fuel pump issues all weekend but claimed enough points to secure his place in the final behind Nat Rallysport’s Nathaniel Dillon. Lewis Bates claimed the final spot in the ARC2 final.

The six finalists will receive entry into Kennards Hire Rally Australia and a set of MRF tyres to do battle in the final. The highest placed outright ARC2 4WD and ARC2 2WD teams will walk away with the 2017 CAMS ARC2 titles.

Speaking at the Lightforce Rally SA podium, Craig Brooks was thrilled to grab a spot in the ARC2 final.

“We are pretty happy about that,” Brooks said.

“The ARC2 final is what we have been aiming at all season so we are really excited to go to Coffs Harbour and bash it out with the best second tier guys in the country.”

For Stephen Mee, the introduction of ARC2 has helped his team start on the path towards national competition.

“We’ve always wanted to do ARC and with ARC2 coming along it’s given us a stepping stone to see what goes on at national level and to help us plan for what we might want to do in the future and it’s been really fun,” Mee said.

“Rally Australia is the one event on which a domestic crew, providing they are appropriately licensed and have a car that meets the relevant regulations, can contest a World Championship event alongside the fastest rally drivers on the planet,” Kenny said.

“Rally Australia welcomes the six successful ARC2 crews and wishes them luck on 16-19 November. We also encourage all other eligible crews to step up and have a crack.”

Mentor Tyres Chief Executive Officer and importer of MRF Tyres for Australia Vivek Ponnusamy said he was pleased to be a part of the CAMS’ ARC2 initiative.

“When CAMS asked us if we would like to be part of it, we did not even hesitate for a moment,” Ponnusamy said.

“ARC2 is the best platform for young drivers and state competitors with limited budget to step up. This is in line with MRF’s mission of helping and supporting club and state level competitors to raise up to national and international level.”

ARC2 was introduced to the ARC in 2017, offering a pathway for state level competitors to make the step up to national level competition. ARC2 competitors nominate two ARC events, including their home ARC event, where they are eligible to score points.

Kennards Hire Rally Australia, the final round of the CAMS ARC and the World Rally Championship, will take place in the seaside town of Coffs Harbour on 16-19 November.