It was close - there was less than a minute in it at the end - but Welsh pair Meirion Evans and Lestyn Williams (Ford Escort Mk2 RS1800) did enough on the final day today to win the 2016 New Zealand Silver Fern Rally.

The Porsche 911s of Dippie and Coghill, and Hamilton father and son Stuart and Brad McFarlane (which finished sixth), were the exceptions that proved the rule in this year's event, dominated numerically and on the road by Mk Ford Escort RS1800s like those of Evans and Williams, and Reid and Neill.

The other eight top ten finishers were in Mk 2 Escort RS1800s while a Nissan FJ20-powered Mk 2 of Derek Ayson and Gavin McDermott from Gore dominated the Challenge category for late model or non-standard historic-era cars), crossing the finish line in Christchurch with a buffer of half an hour over runner-up, Australian rally veteran Ed Mulligan and co-driver Tony Brandon (BMW E30 325i).

The biennial, seven-day, New Zealand Silver Fern Rally is one of a the few genuine marathon-style multi-day gravel events left on the world historic rallying calendar and as such attracts as many entries from the home of the sport, the UK, and Australia, as it does New Zealand.

This year's event covered over 1000kms of closed special stages and over 1700km of touring stages between Christchurch in the north and Papatowai in the south, starting on Monday November 28 at Christchurch's Addington  Raceway and Events Centre at 7.30am and returning this afternoon (Sunday Dec 04) at 4.00pm.

Early leaders included Englishman Simon Tysoe (who finished second in the 2014 event) and co-driver Paul Morris, and former NZ rally champion Brian Stokes with wife Anne in the co-driver's seat, both in Escort RS 1800s. But it was the metronomic consistency of Evans and Williams that told in the end. 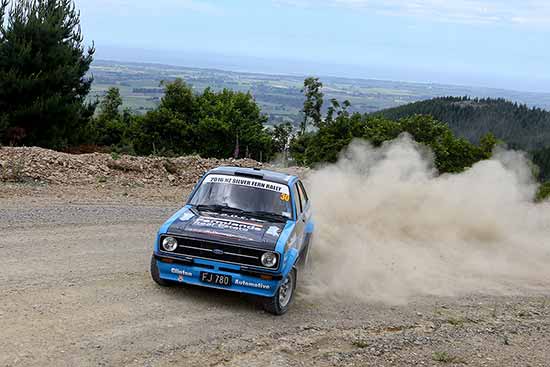 Winners of the Challenge class run concurrently were Derek Ayson and co-driver Gavin McDermott in Ayson's Nissan-engined #30 Ford Escort. Runner-up Reid and co-driver Neil, were ultimately quicker. As were Challenge category winners Ayson and McDermott. But try as they might, Reid and Neill could not peg back the 4.10 they lost to a time penalty on Day 2.

Today's results were typical with Evans and Williams winning three of the six stages and others - Reid and Neill, Brian and Anne Stokes and fellow NZ rally veteran Shane Murland and co-driver John Benton one apiece.

Another driver left wondering what might have been was one of the other former National champions in the field, Bruce Herbert from Palmerston North. With co-driver Jim Hey Herbert was quickest in the Challenge class through four of the six stages today and two of the seven on Saturday.

Having collected 15 minutes worth of time penalties early in the event when the diff in his Mitsubishi Lancer EX Turbo cried enough all he could do was chip away at the combinations up front, eventually finishing a hard-won sixth in class.

That said, Derek Ayson and Gavin McDermott did give everyone else in the Challenge category a glimmer of hope this morning, with two slow stages.

Fortunately for the southern pair the problem - a broken rose-joint in the car's rear suspension - first raised its head in a transport stage and Ayson made the call to back off the pace through the next stage (44) before fixing it with parts he knew his service crew had before the next.

However a wheel stud was stripped while that job was being done so he and McDermott had to complete the next stage (45) at a similar, gentle, pace to make sure they got to the lunch time service at Methven to replace the stud.

They did and were immediately back on the front-running pace of Herbert and Hey, and Hamilton pair Brent Taylor and Chris Ramsey in Taylor's Toyota 86, in the final two stages.

The pair only finally decided to enter the event a fortnight before, bur proved fast, consistent and able to bounce back after the odd off-road excursion for one of the most popular results of the event.