Dani Sordo's engine blew up at the Monza Rally.Paulo Andreucci won the R5 class in his Peugeot 208T16, while fourth in R5 was the Skoda Fabia of the 16 year old Finn Kalle Rovanpera.

Dani Sordo finished second overall in his Hyundai team WRC, despite the engine blowing up spectacularly on the final run in front of the grandstands. Most top drivers used Pirellis, but Sordo had Michelins.

Canadian driver Ian Crerar plans to enter Rallye Automobile Monte-Carlo in a Peugeot 208 R2.  He finished third in his class on this year’s Tour de Corse.

The WRC media ware taken aback when a website ran a story from their regular correspondent that Citroen had cancelled their planned WRC reception, due to be held a few days before Christmas.

The effect of this story was dramatic. A hundred heart attacks later the truth came out.

It was only the media trip from that country that had been cancelled, not the presentation itself.  Looked like a case of media revenge!

Hyundai Team Manager and promoter of the Ypres Rally in Belgium, Alain Penasse, commented on the reduced scale 2017 European Rally Championship calendar saying: “Our friends at EuroSport have difficulties to find rallies who want to be in the European Championship.

“We decided not to be there any more because we didn’t believe in their product.  The new born TER championship is a mini European championship with only six events.

“We think privateers want a cheaper championship which is not too far from home.  The interesting rallies in the TER is the card to play”. 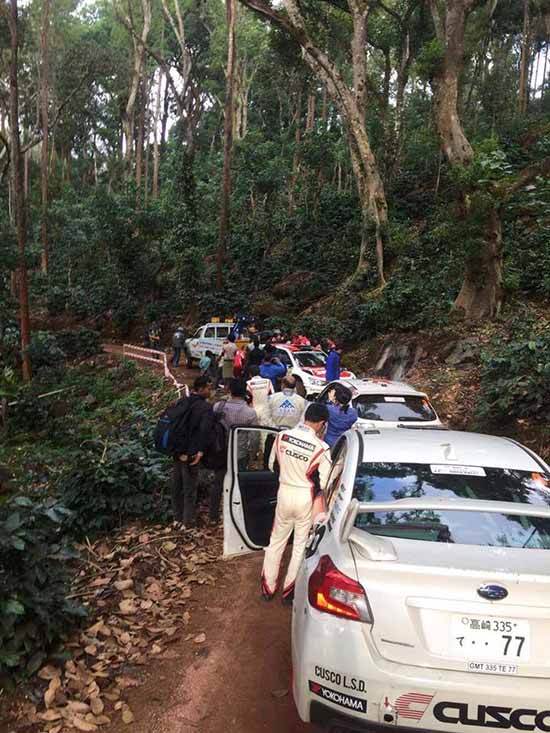 A stage on the Rally of India was blocked after Fabian Kreim broke his Skoda's suspension.Fabian Kreim ended his APRC season in spectacular style when his Skoda Fabia R5’s suspension succumbed to an impact and the car blocked the stage on the opening stage of the Coffee Day Rally in India.  The event was due to finish on Monday.

Welsh Escort RS driver Meirion Evans was the eventual winner of the six-day Silver Fern Rally historic event in the South Island of New Zealand.  17 of the 24 finishers were Escorts.