COMMENT: A possible Safari Rally return is a complex problem for the WRC

There are more things in life than meet the eye! The first half of the 2018 season ended with the news that the WRC Promoter had signed an accord with the Government of Kenya, under the gaze of the President of the FIA, no less. To see the WRC return to Kenya has been a major political ploy for the FIA hierarchy, because African motorsport is full of voting members in the FIA, and if they can see their causes are recognised by the FIA, they will be strongly in favour of the current FIA regime. No better cause is the resurrection of the Safari Rally, the organisation of which was allowed to crumble after the final time the rally was run as a WRC event, in 2002. In the past two decades the whole shape of WRC rallying has changed out of recognition, and events have adjusted themselves accordingly. 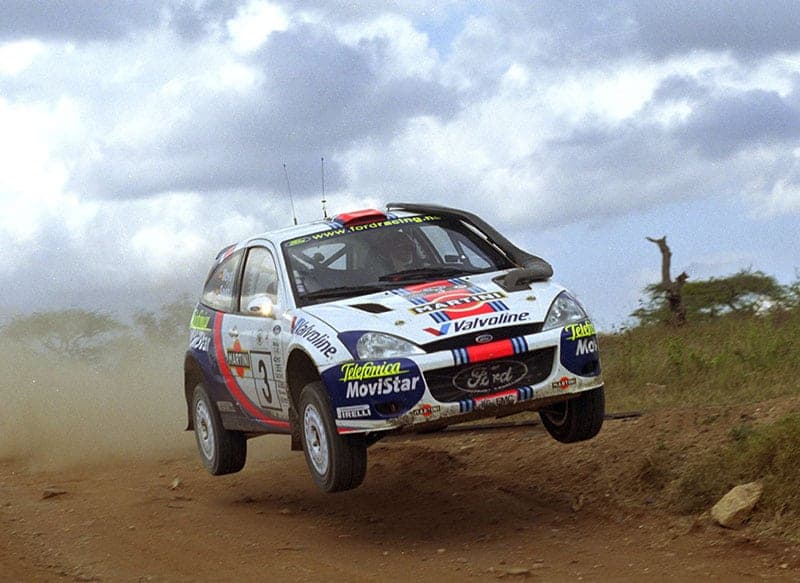 The fear is that the required changes in format for a revived WRC Safari Rally will take away the allure of the traditional Safari Rally, which fans fondly cherish. Already the 2002 rally had been criticised for straying away from the character of the event in its heyday. A 2019 event will inevitably stray much further away. The cherished traditions of Safari centred around being run in a wide variety of identifiable terrain, covering considerable distances, and facing extreme cross-country rallying type terrain. The huge range of technical challenges which must be built into cars specially for the event, the open road character of the route, which provides the risk of unexpected encounters with non competing traffic – and wild animals – also needs to be considered. There's also the spectacular freedom of servicing and use of helicopters for servicing and safety route checking. 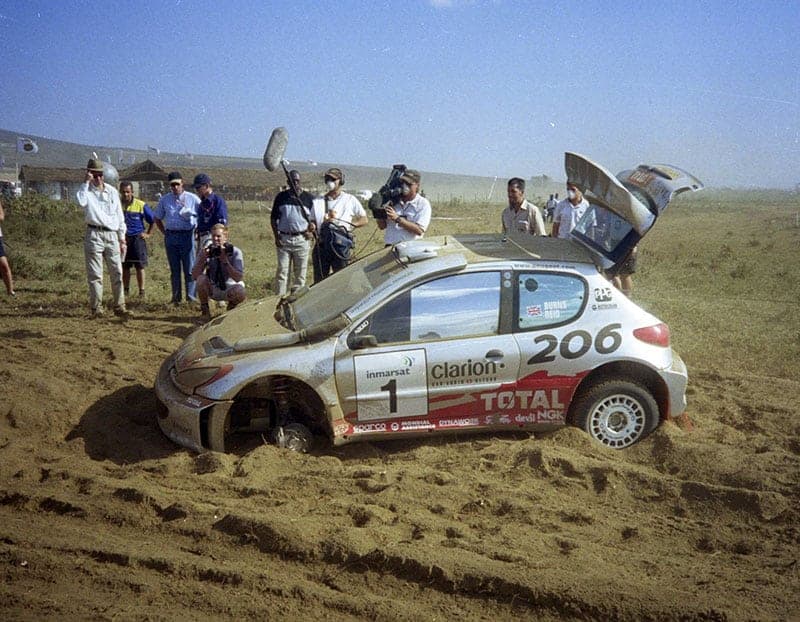 Richard Burns retired his Peugeot must metres from the service park in 2002.

All these characteristics demanded expensive testing and preparation work. This was acceptable for teams 17 years ago, in years before teams were compelled to contest every championship event and individual event budgets were more flexible. The regulations in force for WRC rallying have evolved since the Safari dropped out of the WRC, based on the practicalities of existing WRC rallies and the design of the current cars. The question is, how much of this cherished tradition is still available? One of the few stipulations from the FIA is that the competitive sections must be run on closed roads. Unexpectedly, this is not the big challenge facing a potential present day WRC Safari Rally. Lip service was paid to road closure on the last of the WRC Safaris, but this was achieved by moving stages into barren areas. The policy now is not the road closure aspect, but the private road factor. 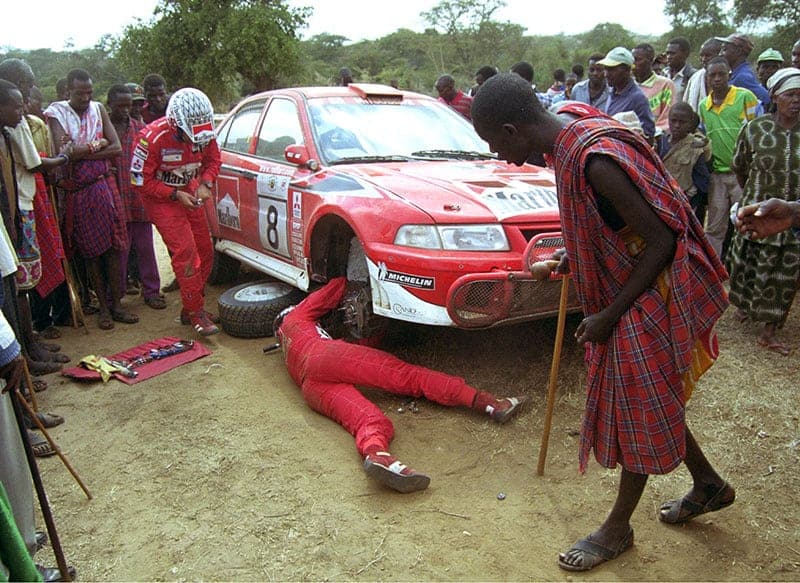 There are a variety of different private estates for stages, notably the Delamere estates south of Nakuru and the Del Monte estates around Thika, reportedly with a scenic variety. More challenging will be tying up suitable stages around a suitable central service park. The main challenge, however, is creating the most suitable structure for the event. There is 17 years of experience to catch up, but state funding will bring pressure that decisions are made by influential businessmen who may have their own commercial interests to consider, more than experience of current day WRC rallying. Will the cost, or maybe pride, prevent importation of foreign organisational expertise, which would be more confident of venturing into uncharted territory like road surface damage limitation, recce requirements and spectator control? 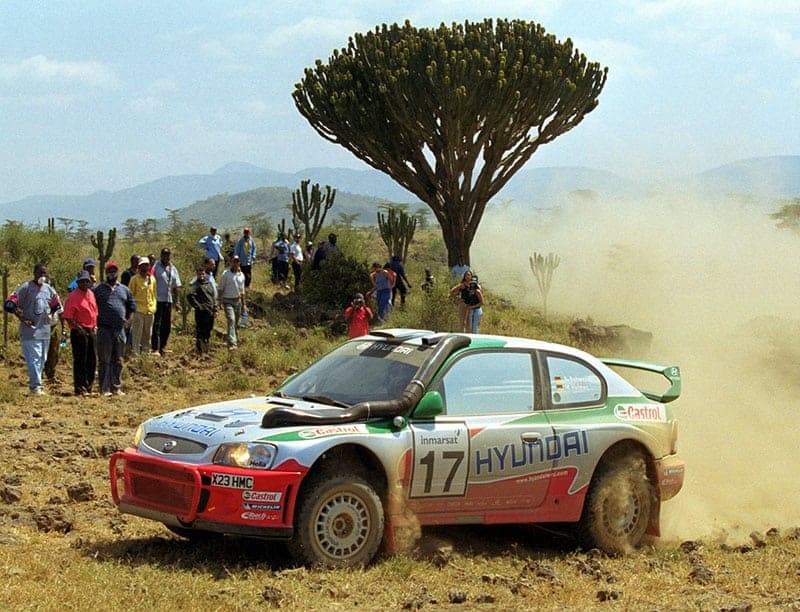 Although recent Safari Rallies have been run on closed roads, these events have not attracted spectators in great numbers, and lapses in road closures have not been widely noted. A WRC level Safari will attract local people who want to savour the special occasion, rather than the few dedicated fans who have a chance to understand the new spectator routines. Lapses in safety procedures on a WRC Safari would be catastrophic. Is Kenyan sport ready for the world to return? The FIA’s African Rally Championship is at a very low ebb and very badly promoted, though the Kenyan championship is one of the more active national series in the Continent. 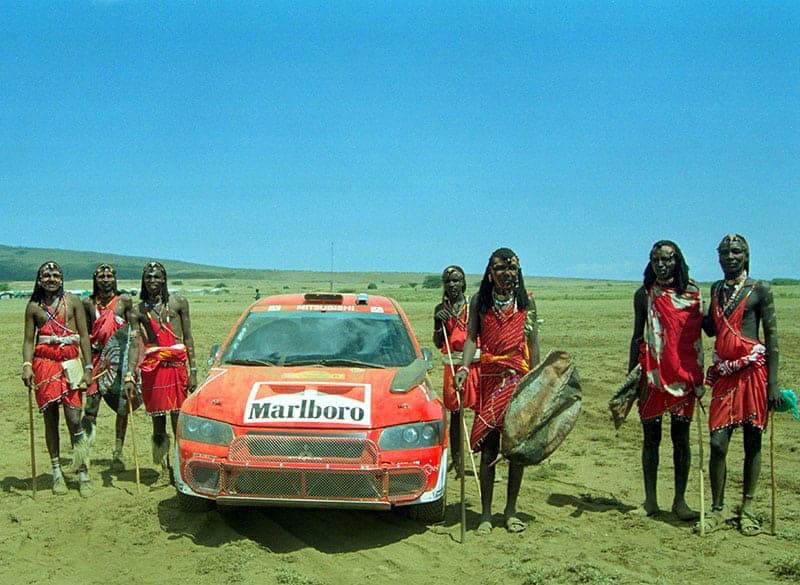 Added local protection for the factory Mitsubishi Lancer in Kenya.

Back in the days before the WRC went to Japan for the first time, there was considerable excitement in the teams, and it was only when the event arrived there did the realities of the situation, the lack of available awareness of the rally in the country, become evident. Teams suddenly realised the event did not create a promotional bonanza. Will the teams agree to a championship which includes the Safari if it brings with it endemic African problems? The arrival of the highly visible influx of money means it will be hard to ensure that crime, fraud and corruption by rogue policemen, customs personnel, local businesses and local entrepreneurs is contained. 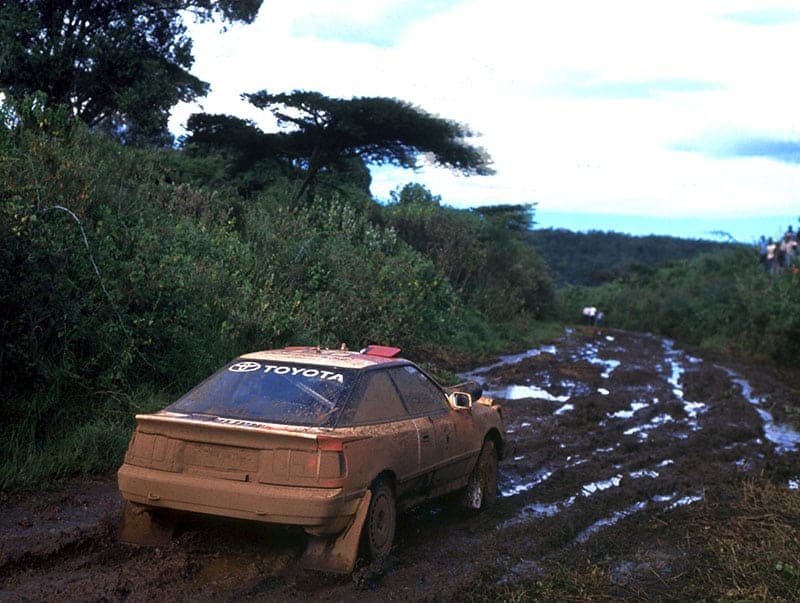 Carlos Sainz about to tackle one of the Safari's treacherous mud holes on the 1990 Safari Rally.

Recently there was uproar at the Brazil Grand Prix when team personnel were robbed at gunpoint. This year the WRC Promoters were robbed at gunpoint in Argentina. In Kenya, rally personnel were robbed in the streets of Nairobi in daylight around 20 years ago … Is this the world to which the current WRC teams want to return? It all brings us back to the FIA. Even beyond the issues of voting power, Kenya provides the FIA with a special opportunity for attention. The death rate on the roads of Kenya is currently about 10 times the death rate on British roads! Maybe the question now is whether the WRC Promoters will find a move back to Kenya is worthwhile, but who really now needs the Safari back again? The fans at home, the Promoters and their organisers - or just the FIA?