European Rally Champion Jan Kopecky celebrated his first visit to Australia with victory in Round 3 of the FIA Asia Pacific Rally Championship at the International Rally of Queensland on the Sunshine Coast today.

The driver from the Czech Republic brought his Indian-run MRF Skoda Fabia to the finish in the Mary Valley township of Imbil 1.9 seconds ahead of Scott Pedder, in a Renault, after dominating the weekend.

Mazda2 driver Brendan Reeves was third and simultaneously maintained his lead over Pedder in the East Coast Bullbars Australian Rally Championship, which was run concurrently. 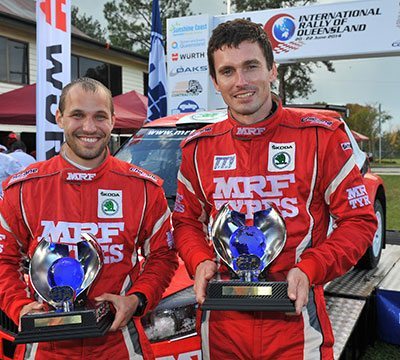 He won six of yesterday's 10 competitive Special Stages and was rarely troubled after teammate and closest rival Gaurav Gill of India crashed on the fourth test. Today, Pedder won the three morning stages, but Kopecky put the hammer down to claim the last two stages of 36 kilometres each and clinch a satisfying result.

"We've travelled a long way from home in the Czech Republic to this rally, so it's a special feeling to hear our country's national anthem on the podium," Kopecky said after the event.

"It's great to win and we are now leading the championship – but there are still three rounds to go and I hear the next event in Malaysia can be very difficult.

"The stages here were beautiful and very challenging. It's been a great experience for us to be here and hopefully we'll be able to use this for the rest of the season - every kilometre on gravel is valuable to us.

"Today it was incredibly slippery in a few places (after overnight rain), even more than yesterday. Because the roads were dry when we did our reconnaissance, they felt quite different today."

Scott Pedder was thrilled to get his two-wheel drive Renault to second place outright and first in the Australian championship section.

"I didn't have much more to throw at it, but we won three stages today and two yesterday, which was pretty good.

"It's fantastic to have two G2 cars (G2 category – Pedder and Reeves) on the podium and prove that Australian rallying is pretty strong."

Canberra's Neal Bates maintained his customary position at the front of the field in the Australian Classic Rally Challenge. His progress to first place in his all-conquering RA30 Toyota Celica world rally replica was merely interrupted by an electrical fault yesterday and he won 14 of the event's 15 stages.

After being four minutes behind at the end of the Saturday leg, he finished almost seven minutes ahead of second-placed Jack Monkhouse, in a Datsun 180B SSS.

Organisers cancelled the fifth of today's scheduled six Special Stages after losing time due to an accident and escaped cattle.

However, Event Director Paul Woodward said the rally had been another important success on the Sunshine Coast's major sports events calendar.

"We had good attendances at the weekend forest spectator points in the Mary Valley and an extremely good crowd at our Ceremonial Start at Caloundra's King Beach on Friday night," Mr Woodward said,

"Dedicated television coverage from this weekend, including scenic footage of the Sunshine Coast and Hinterland, will  go around Australia and to almost 120 countries. There will be even more international media coverage than domestic, with reporters or crews present from China's CCTV network and four Indian daily newspapers, including the Times of India which circulates 2.3 million copies a day.

"We have also reached agreement to return to Caloundra and our headquarters at the Oaks Oasis Resort for the next three years and have had the opportunity this weekend to showcase the excitement, colour and reach of our event to influential representatives of the Sunshine Coast tourism and business communities.

"With good growth in prospect, we're already looking forward to bringing another field of world-class drivers to the coast in 2015."