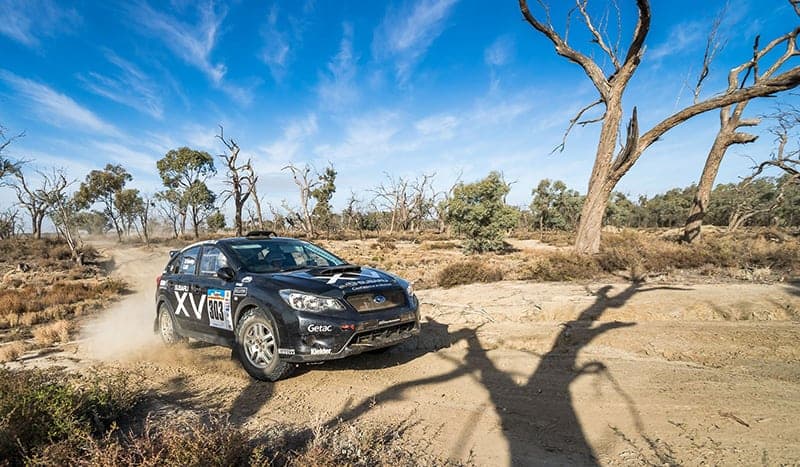 Rob Herridge finished on the podium in his new XV. Photo: Donat O'Kelly

“We’re really pleased with the result and the way the XV has performed”, a very happy Rob Herridge said after returning to service park.

“We only finished the car the day before it was put on the trailer from Perth and my first drive in it was on the way to the first stage. So to score a podium place on debut, we couldn’t have asked for more.”

“We’ve had a few teething problems, and the boys in the crew have worked really hard to keep us in the event. There were a couple of long nights replacing the steering rack and the gearbox.

“But apart from that, the car has performed exceptionally well. The conditions this year were really dry and soft and sandy, which played right into the hands of the buggys and trophy trucks. But the little XV proved just what a reliable and tough package it is.”

The fifth and final day of Safari started to the west of Wentworth for the 100 km Warrananga stage, followed by two shorter stages that ran parallel to the Silver City Highway.

Rob and Sam started the day in fourth outright, following the retirement of first-placed John Hederics overnight. But the XV showed great speed today and overtook Phil Lovett on the second stage to collect the final podium position.

“Sam and I have already been discussing what we want to change in the car for next year. We’ve learnt a lot about this car, and we think we can make it even better. We had a great car in the Forester XT, but the XV has given us a really big step up.”