FEATURE: Co-Drivers – The Gods must be crazy!

When we think of team sports, motor racing isn't the first activity that springs to mind. But in the world of rallying, there's no event in the absence of the unique partnership which exists between a driver and co-driver. The two are interdependent. I tried it once, co-driving. A couple of times actually, but the result was always the same; absolutely petrified and totally useless. As a psychologist and needing to keep my self-esteem intact, I concluded that rally co-drivers are unquestionably ‘nuts’.

The gods must have been crazy, or thought it a great joke, when they invented the ‘co-driver gene’, scientific name, Navigatorus-bravous.

It is said that some co-drivers explain away their delusional perception of enjoyment as helping a friend, or supporting a partner. One long suffering wife, sitting next to her soul mate calling the notes said; “It’s the only time he does as he's told.” These co-drivers can be described as ‘brave’, but as a general rule they stay with friends and partners. So brave, but not mad. Some of you will find this difficult to believe, but there is another breed of Navigatorus-bravous, a rare sub-species, which some researchers have unkindly described as evolutionary abnormalities.

These co-drivers seamlessly move between tribes and are comfortable sharing a car with any from the Rallyus-driverous species, or as they are more commonly called, rally drivers.

These navigators are highly adaptive at home in both the dirt and tarmac, and in either a CAMS or AASA habitat. Their scientific name is Navigatorous-impervious and translates as ‘navigators impervious to fear’. With any sub-species, variants exist. Some co-drivers are selective for whom they call the notes or read the maps, preferring the company of Expertus rallyus-driverous (expert rally drivers). But then there’s the rarer breed; Navigatorus-insaneous, the ones comfortable with not only the Expertus, but also the Novicious, otherwise known in the motorsport kingdom as ‘the novice rally driver’. 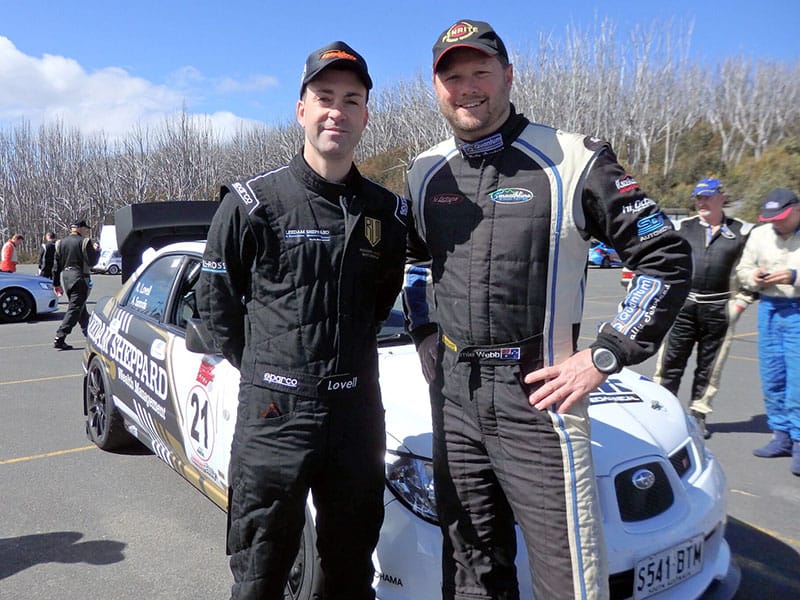 Bernie Webb (right) with Richard Lovel at the Adelaide Rally in 2017.

Such an Insaneous is Bernie Webb, who started rallying in 1997. He is one of only a handful of individuals in his native home of Australia, making a living writing the confusing hieroglyphics, the enigma code, called pace notes. Mark Clair, while competing in the recent Targa Great Barrier Reef, attempting to decipher Bernie’s scribble on Page 1, of the Copperlode stage, interpreted it as, “Scary as sh…t”. But then again, Mark Clair is a driver, so what would he know? Just how insaneous is Bernie? Navigating is his living; how he pays the mortgage.

Obviously, it’s a large mortgage, as how else can you explain him sharing a car with the green – the new to the sport, as well as the best?

And then he coaches navigators and even drivers... to get the most out of his confusing hieroglyphics. Bernie has won most events, including an outright victory at Targa Tasmania with Steve Glenney in 2008. Currently, he is competing with Steve Spada in the Australian Tarmac Rally Championship. If Bernie Webb is a Navigatorus-insaneous, what do you call a person who navigated 23 events in 2017? Those lacking in the contemporary niceties, the political correctness which should be attributed to all, call him a ‘Rally Tart’, or ‘Tom Cat’, as he’s willing to get in a car with anyone. 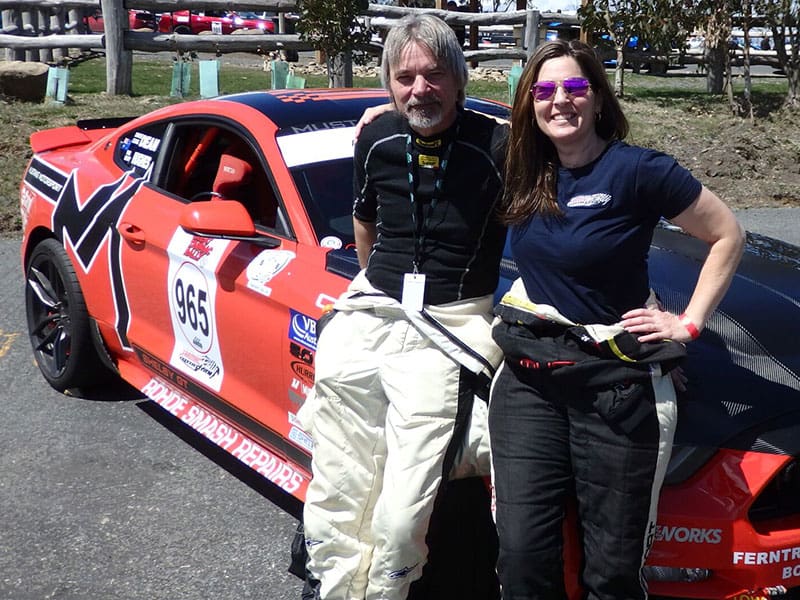 But in the more refined circles, Dennis Neagle is known as the ‘Classic Gentleman’. I wondered if the word classic, referred to his age? And with a rally history starting in New Zealand and dating back to 1980, it might well be.

Dennis is the non-discerning kind of gentleman, loving both the gravel and tarmac; an Insaneous that comes with an impeccable pedigree, including a class win at Rally Australia, a round of the World Rally Championship.

He’s partnering with Neill and Daniel Ford for the ATRC series, and in the beautiful V12 Jaguar of Mark Hammond for the 2019 Targa Tasmania. Navigator craziness is not the preserve of the XY chromosome, it’s equally at home with the XXs of the species; ask Mary Hughes of Tasmania. Perhaps it’s inevitable, that a person with a passion for horses, would be seduced by horsepower. It was with her husband in 2009, at Targa Tasmania, that Mary succumbed to the allure of rallying. But it would be with another man at the wheel, navigating a Triumph TR-7 V8 in 2015, that her love affair with Targa Tasmania would blossom, finishing first outright in Classic. A tarmac specialist, Mary is currently navigating for Craig Dean in the Targa and Australian Tarmac Rally Championships.

“I have a great arse,” said Mary. “A feel for the car,” before adding with humour, “Don’t write ‘a good arse’.

“A good navigator has to psychologically manage their driver. Navigating is the art of withholding information, delivering it at the right time for each driver to assist them in going faster.” 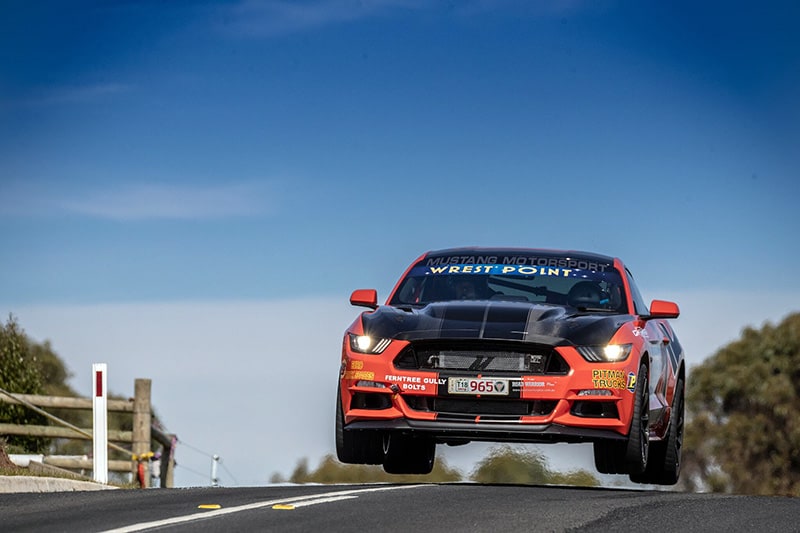 Craig Dean and Mary Hughes is action in Targa Tasmania.

If this were a prosecution, a trial to prove navigators are indeed crazy, my case would rest on the testament of Mary Hughes. What breed of person would ‘withhold information so a driver could go faster?’

The Navigatorus-bravous and their kin, are the undoubted heroes of rallying.

Putting aside my attempts at humour; the women and men who sit alongside the drivers are a rare breed – people of unique character. Not only do they call the notes and manage the car in stage, their real work has been done long before the event. 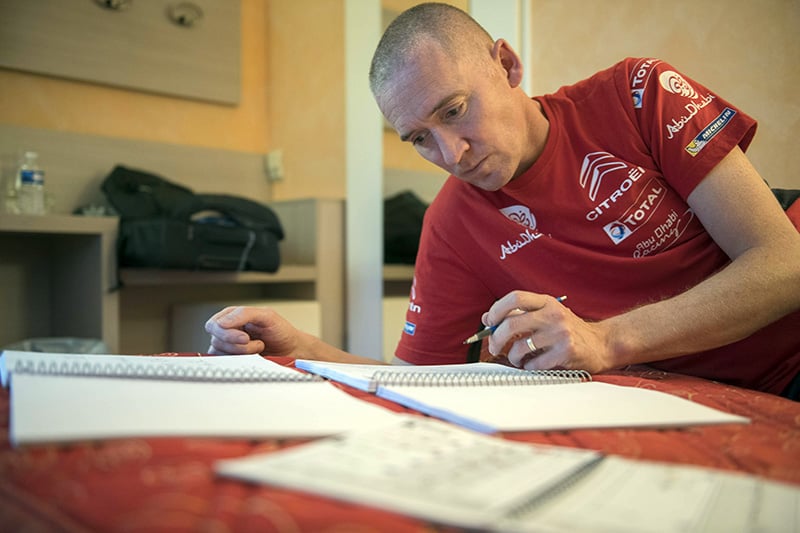 Professional co-driver, Paul Nagel, puts in the hours before his next event. Photo: RedBull Content Pool

The extraordinary talent of a navigator, or co-driver as we prefer to call them, is not that they can read notes. It's that they can read in front of what they can see and at a pace which seamlessly joins the unfolding obstacles confronting the driver into a smooth and coherent pattern. The Goldilocks instructions; not too fast and not to slow. Just right!

The top navigators, like Mary, Bernie and Dennis, don’t just read the notes, they see and sense them to give an audible picture of the road ahead.

When it works, the driver’s ears become their eyes, often overriding the responses the visual cues would otherwise demand. Co-driving is a craft, not only of letters and numbers, but of psychology, the interdependence which is a driver and navigator. 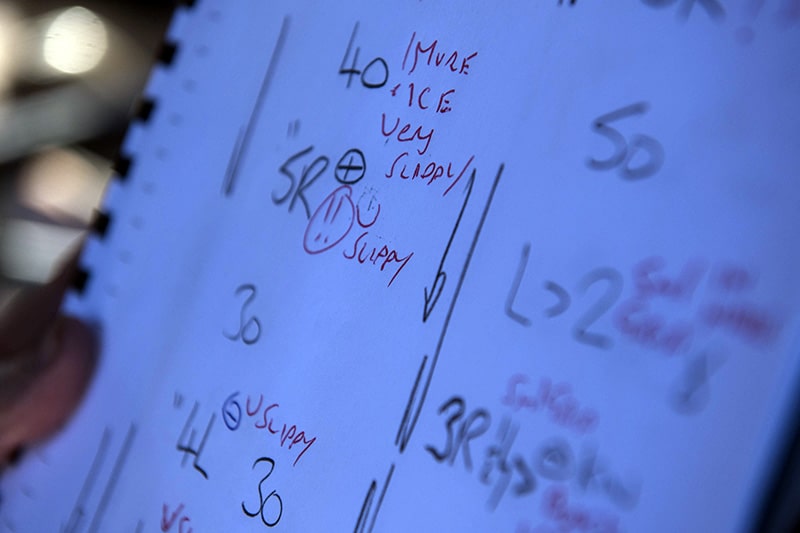 Hieroglyphics or a precise description of the road ahead? Photo: RedBull Content Pool