In 2002, RallySport Magazine was known as Australian Rallysport News (ARN), and was a monthly tabloid publication providing rally news for fans across Australia.

For our Rally Australia review edition that year, we featured an article written by well-known photographer, Neil Blackbourn, who was one of the first on the scene to Francois Delecour’s horrible accident on the fast Murray Pines stage. His first hand account of the accident yet again proves the importance of safety, and the care which needs to be taken in our amazing sport. "There is a stretch of road in the Murray Pines area, near the small West Australian town of Dwellingup, south east of Perth, where I have spent a little time. Okay, a lot of time - watching rally cars. Photographing rally cars. Listening to rally cars.

In previous years, the Murray Pines area has been home to the Murray Pines stage, and this corner I like to go to means that you can hear about four to six of the fastest cars at one time, clearing a path through the Western Australian trees to give you a picture that may or may not be any good.

To be honest, I go there to listen rather than to photograph it. This year would be a little different. 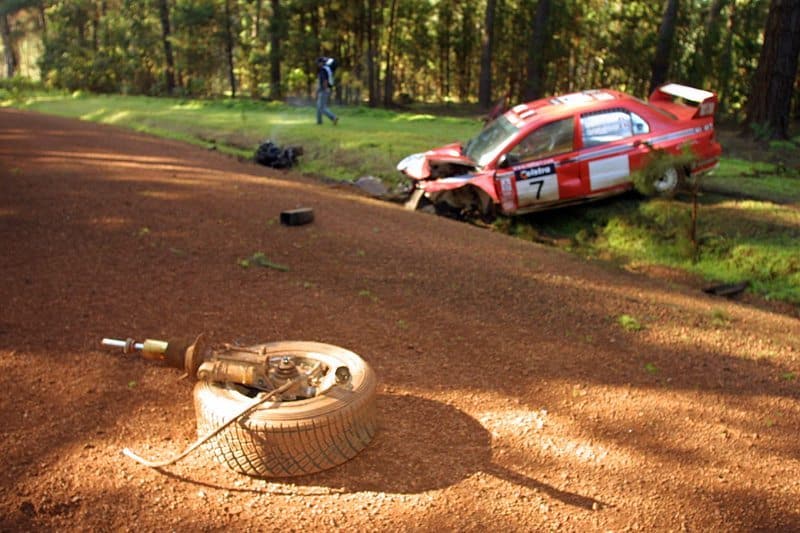 The engine and front suspension was ripped out of Delecour's Mitsubishi Lancer Evo. Photo: Neil Blackbourn

I have always thought that this bit of land that I called my own would always have trees. This year, some of the trees that used to be there, in what was the early part of the stage, had gone, and the stage had been cut in two. A shame – two reasons that the aural sensation would not be the same. But the jump at the crossing (famous for something else that I will explain later), caught my eye.

Richard Burns burnt the clutch out in his Peugeot 206 WRC and stopped just after it, and the assembled shooters all watched as Colin McRae launched the Focus he was piloting (not driving!) over the crossing.

So after taking the obligatory shots of the 206’s crew trying to restore the car to working order, and giving up – I thought the jump shot would be in order. Let the long lens do the work and stay out of harm’s way. I‘ve seen stuff here before…. 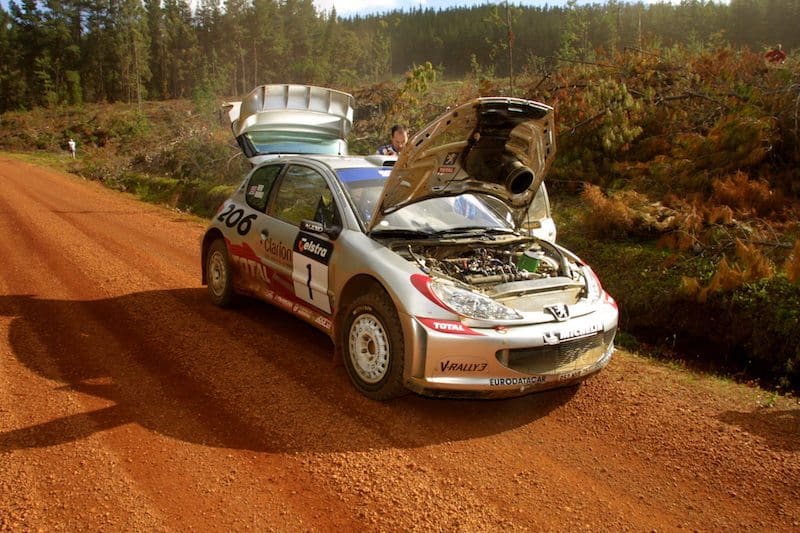 A few shots later, and the jump was looking good. Cars in the air, not too high, but a nice angle. You could hear them coming over a crest, pull sixth gear, then maybe change down (or not!) for a corner, then blast into view. Wham! Over the jump.

Except when I expected the Mitsubishi Lancer of Francois Delecour and Daniel Grataloup, all I heard was ‘THUMP – CRASH’ at the corner before the jump. Then nothing. A horrible nothing. I ran.

I saw a marshal, and asked whether he had a radio. He said no. I told him to go to the nearest radio and tell them to stop the stage. Then I turned around and looked up the road. I could see the engine was on fire. Hang on. I can see the engine. “Do I really want to see this?” I asked myself. 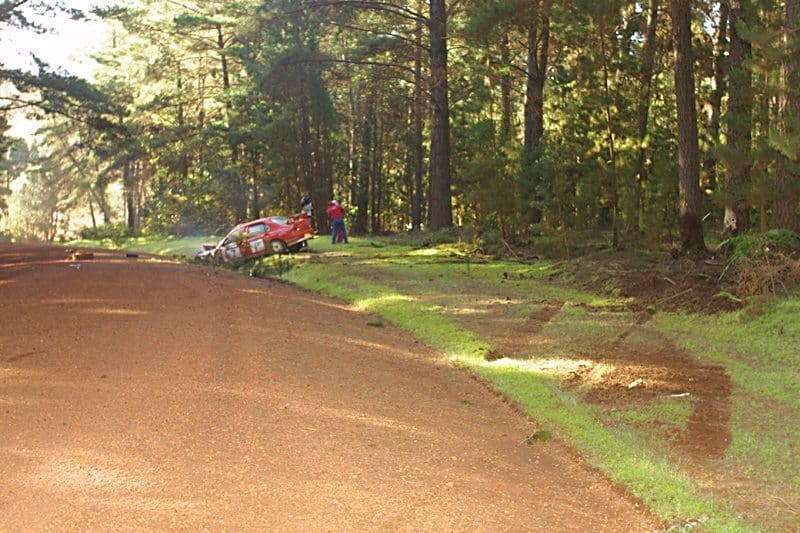 The scene of Francois Delecour's Mitsubishi was one to churn the stomach of any rally fan. Photo: Neil Blackbourn.

I ran and dropped my cameras near the engine/gearbox, torn out of the car by the impact into the trees.

The co-driver’s (right hand) door opened. I tried to talk to Francois and Daniel. There was no reply. The marshal returned with a mate and a radio. I had tried to help Daniel out of the car, but he got out himself. In pain. Plenty of it. Francois did not respond to me, but his blank stare told me he had been knocked out (as the in-car footage showed later). He eventually (five or so minutes after the crash) got out of the car himself, on Daniel’s side, and responded to us. 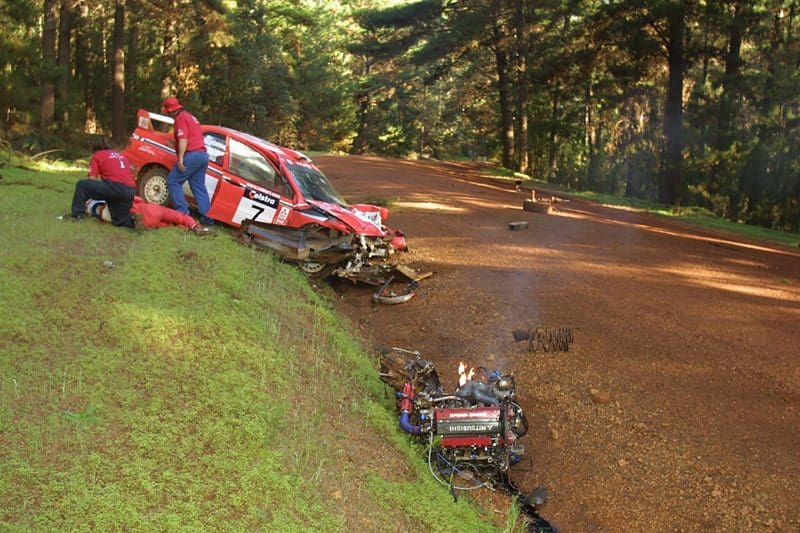 The Mitsubishi's engine was torn from the car. Photo: Neil Blackbourn

The marshal knew to put Daniel in the recovery position. I concluded that my job would be to slow the cars down – from sixth gear crest to corner – hoping these guys slow down! After two cars pass (at three minute intervals), Richard Burns turns up. Daniel at least responds to his questions, and Richard is of great assistance with Daniel until the doctors turn up. The stage has been stopped, but we don’t know that.

After Richard pleads on the radio, the news comes through that the stage has indeed been stopped. I slow Jani Paasonen, who must have noticed how shattered the car of his teammate was, and he slows appreciably.

After what seems like an eternity (12 minutes after the accident, as three cars at three minute intervals have passed, and three minutes after the final competition car goes through), the First Intervention Vehicle (FIV) arrives. I let them know what they need to know, and they usher media away. Fine, I have seen enough! But I waited to see the chopper in the air, with Daniel in it. 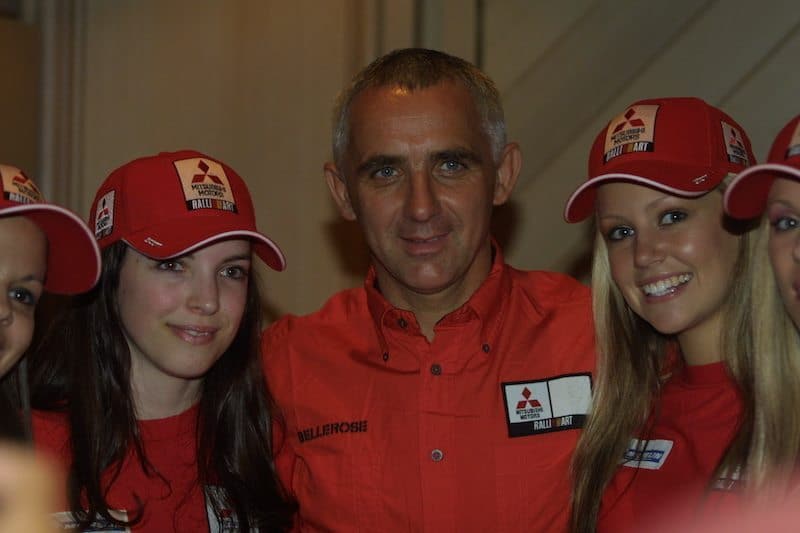 Francois Delecour won four WRC events and is still active in the sport.

The whole point is, rallying is held in the bush. A week earlier I had been in Queensland, one corner away from the start-line crash at the IndyCar race. We were not allowed to photograph it as the marshals turned us away.

But the medical help for the accident at Rally Australia was not right behind the start-line – it was covering the whole stage. And 12 minutes is not bad for the FIV to get to the scene.

Think ‘how do they get into the stage quickly?’ Think, ‘what rally car is in the stage?’ Dwellingup is a long way from anywhere else. But with the helicopter and the medical expertise at the scene, Daniel and Francois got out of the car alive, and both Francois, and particularly Daniel, have both now returned to France. A long recuperation follows for Daniel. Francois will line up for Mitsubishi in this week’s (as I type this) Rally GB. I don’t think I will go to this, one of my favourite spots, in 2005.

In 1996, Carlos Sainz hit a film crew at this spot, breaking the cameraman’s wrist. I was there.

In 1999, Colin McRae launched off the aforementioned jump and hit the trees at a huge speed (we didn’t know what to expect then either as we ran to the car). And in 2002, this. Sorry guys, it must be me. Every three years. I promise, I won’t be there in 2005! Oh, and thanks Richard for your help. And to those marshals, you did a sensational job. Hope I helped!" https://www.youtube.com/watch?v=5FsX5c3fe0M https://rallysportmag.com/coffs-create-rally-australia-memories/
VIP Exclusive Content
Get full, exclusive access for only $6.55/month.
Subscribe Now
Already have an account? Sign in