From Italy to Gisborne for Emma Gilmour - RallySport Magazine
×

From Italy to Gisborne for Emma Gilmour 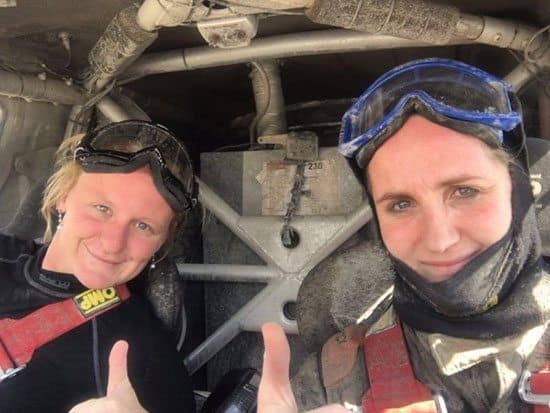 Kiwi rally driver Emma Gilmour has experienced all that cross country rallying could throw at her in the Italian Baja at the weekend.

Dunedin rally driver Emma Gilmour and her South African co-driver Sandra Labuscagne (left) rallied a Mitsubishi Pajero to sixth place in the T2 class, in the cross country Italian Baja rally over the weekend.Held over 330km around the northern Italy town of Pordenone, she and South African co-driver Sandra Labuscagne finished sixth in their T2 class in a Mitsubishi Pajero. Qatar’s Nasser Al Attiyah, who is a multiple rally and cross country champion, as well as double Dakar Rally victor, had invited the rookie cross country crew to become part of his team for this event.

The result came after three eventful days where the duo battled through some of Saturday’s stages with no windscreen, wearing googles to combat the flying mud and water.

They had tipped the vehicle over on the 50km stage two on Saturday.

“I just kicked off a bump on the inside of a corner and as I corrected it went into a half spin in the opposite direction. I thought it was just going to spin but the tyres dug in and we rolled over. The damage was superficial but we couldn’t get it back on its wheels.” Emma says.

“Our awesome team got us going again for the afternoon with no windscreen – and motocross goggles for us – which proved exciting when we hit the water and mud splashes during the stage,” Dunedin-based Emma says.

“We got really wet and really muddy but it was heaps of fun,” she adds.

They finished that afternoon’s stage third quickest in their class but the rollover meant they missed out on an overall result.

“Due to our problems yesterday we spent a lot of time trying to get past cars so we were happy to still get third quickest T2 class time on Sunday morning. We then bolted on some new tyres to have a good go that afternoon and we were having a great stage – overtaking five cars in first 20km – until we got a puncture,” Emma says.

A problem jack and getting stuck behind a slower car for 26km out of the stage made for a frustrating section of the rally, although it did not diminish Emma’s overall enjoyment of the event.

“What an amazing experience! I cannot thank Nasser enough for his support and also Michelle Mouton, Jutta Kleinschmidt and Fabrizia Pons for their passion in making this project happen,” Emma says.

She also thanked her co-driver Sandra “for doing a great job and making the adventure even more enjoyable. And to Renato, Ricky, Alina and everyone from R Team – Ralliart for providing us with such amazing Italian hospitality and race support. Also Sandra’s husband and parents for flying the flags out in the stages.”

“It has certainly been an amazing adventure learning about FIA Cross Country Rallying and I hope that we will get to do more in the future – maybe even the Dakar Rally?” Emma ventures.

For now her attention turns back home to where she will compete in the fourth and penultimate round of the Brian Green Property Group New Zealand Rally Championship in Gisborne on Saturday.

Emma experienced the honour of becoming the first woman in New Zealand history to win a national championship round, when she drove her Vantage Windows and Doors Suzuki Swift Maxi to victory at the previous NZRC event in Canterbury earlier this month.

“It has been an amazing month winning the Rally of Canterbury then heading away to Italy for the cross country event. I need to stay focused now as the NZRC is wide open with all the frontrunners having dropped a round.”

Emma and her co-driver Anthony McLoughlin only trail the points leader David Holder by six points and will be concentrating on moving past him to take over the championship’s lead by the end of Gisborne’s six stages situated on the East Coast.

“The event opens with a power stage and last time we did that stage back in 2012, we won it, so Anthony and I will be looking for a repeat of that and start as we mean to carry on that day,” Emma says.