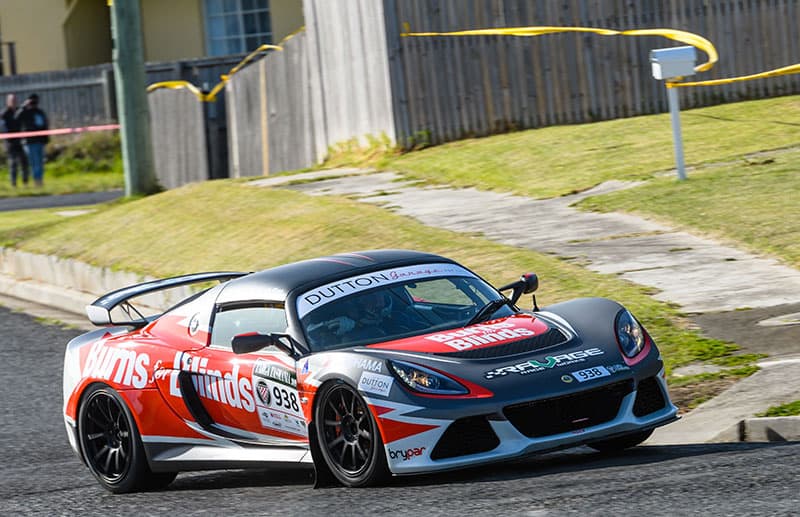 The first competitive stages of Targa Tasmania has seen highly fancied Steve Glenney squeeze out the barest of leads after the opening day of competition.

With the first three stages north of Launceston in the books, Glenney and co-driver Dennis Sims (Lotus Exige 350) have claimed a one second margin over Jason and John White’s Dodge Viper.

While the initial stages were not long tests, the outcome has set-up a mouth-watering contest as the 265-car field commences its six-day, 2000km journey that criss-crosses Tasmania.

Stokell is locked together with Matt Close and Cameron Reeves who have started strongly in their Porsche GT3 RS.

Glenney is still coming to grips with the Lotus, a radically different machine than the Subaru he drove to second place outright last year.

“Driving the Lotus is crazy different to anything else I’ve ever driven,” Glenney said.

“It requires quite a different style, so it’s all about adapting to that.”

Jason White had a scare after the ceremonial start from the Launceston Country Club after smoke started to billow from the dash.

“I don’t think we’ve ever had a more eventful opening day to Targa Tasmania,” White said.

“We left the ceremonial start at the Country Club and had smoke coming from underneath the dash and we thought car was going to burn to the ground.

“It turned out to be some wiring close to the exhaust, but it cut out the right hand bank on the motor, so we did the first stage on five cylinders, but it was a low base time so it didn’t knock us around too much.”

In the Classic GT category, Jon and Gina Siddins have enjoyed the perfect start to their campaign in the Datsun 240Z by taking a three second lead over the 1975 Holden Torana of Michael and Daniel Bray.

Mick Downey and Nicholas Browne are in close attendance, six seconds off the class lead in their 1979 Holden Commodore VB.

Siddins had a trouble-free run ahead of the competition lifting a notch tomorrow.

“Today’s always a bit of a shakedown, so it doesn’t mean much, but it’s always fun to tear around George Town,” Siddins said.

“I built this car in 2008 and after we crashed out last year, I thought it was time to strip it right back and go right through it because it’s been going like this for 10 years.

“The wiring harness was original, so that makes it 50 years old.”

Shannons Classic has begun with a predictably tight tussle which sees Nik Prieston and Dylan Braithwaite clutching a three second lead in the Fiat Abarth 131.

The 1941 open wheel Jimmy Special of Graham Copeland and Josh Herbert is second.

Only one second away is the Ben Newman and Andy Sarandis Subaru WRX STI.

Chasing the Porsche is the Adam Kaplan/Aleshia Penney BMW M3 CSL, while the Mitsubishi Evo 9 of Duncan and Kelly Handley is third seven seconds away.

Darryl and Peter Marshall (2002 Ford Pursuit Ute) have concluded a successful day by holding the lead in the TSD Trophy.

The Marshalls have five points in the penalty-based class ahead of the eight points of Peter Taylor/Tristan Taylor (Lotus Elise).

At the top of Shannons Thoroughbred Trophy is the Ford Escort Mk1 of Tyson and Celise Cowie with the pair holding a four second buffer over the Mitsubishi Sigma of Jack Waldron and Vin Gregory.

Mitchell and Darryl Ringuet have claimed a two second lead over Tony and Sandra Seymour in the Country Club GT Sports Trophy class with both crews in Lotus Sport 350 machines.

Competition continues tomorrow with six stages across 74 competitive kilometres in the north of the state with the lunch stop scheduled for Latrobe.

Fans can get up close to all the cars at the two remaining official Targafests. In Launceston the cars will be on display at the Silverdome Expo on Wednesday May1 from 6pm to 9pm, and in Hobart, at MAC2 on Friday May 3 from 6pm to 9pm.