It may not have registered on your radar in a turbulent 2020, but the world’s most successful rally car has celebrated its 45th birthday.

The Ford Escort MkII first rolled off the production line in early 1975 as the successor to Ford of Europe’s most successful car at the time, the Escort Mk1. The MkII, which was code named ‘Brenda’ before its release, was to continue an increasing history of successful ‘small Fords’ that made their mark on the rally stages and race tracks of the world. First came the quirky Anglia 105E with its reverse-sloping rear window, then the Mk1 and MkII Cortinas with GT and Lotus variants, before the Escort took over and established Ford’s now famous RS pedigree. The squarer-styled MkII was developed jointly between Ford UK and Ford of Germany, and used the same mechanical components, floorpan and core structure as the Mk1. 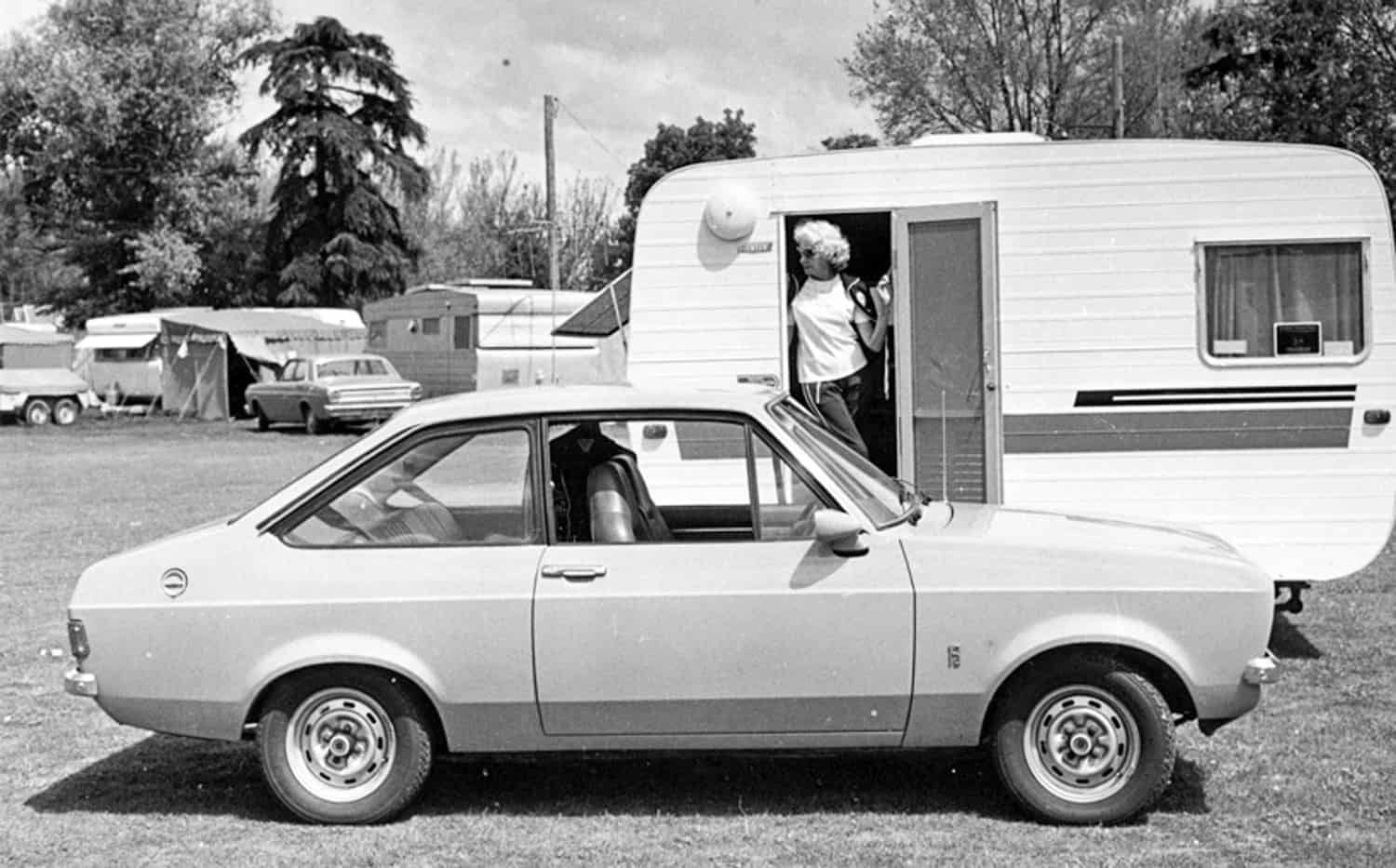 It's 1975 and the Ford Escort MkII has been launched onto the Australian car market. Photographer: unknown

Locally, the car was assembled at Ford Australia's Homebush Plant in Sydney from March 1975 to 1980, in 2-door and 4-door sedan, and 2-door panel van forms. In 1976, Ford Australia produced a tarted up 1.6-litre Escort with pretty red and yellow stripes to promote their participation in the Southern Cross Rally of that year, cars that were similar (in appearance at least) to the imported RS1800s driven by European stars Timo Makinen and Roger Clark in that year’s event. Later, the RS name made its Aussie debut when 2,400 RS2000s were produced, in both two- and four-door form. The cars featured the 2-litre Pinto engine, the rubber-nosed ‘Snoopy’ front, and were available as manuals or automatics.

Off the road, however, it was on the rally stages where the Escort made its mark around the world.

Bjorn Waldegard took a MkII to the World Rally Drivers’ Championship in 1979, and Ari Vatanen added to Ford’s tally when he won the 1981 title in a privately entered, David Sutton-prepared MkII. In the UK, Escorts won seven RAC Rallies in succession. 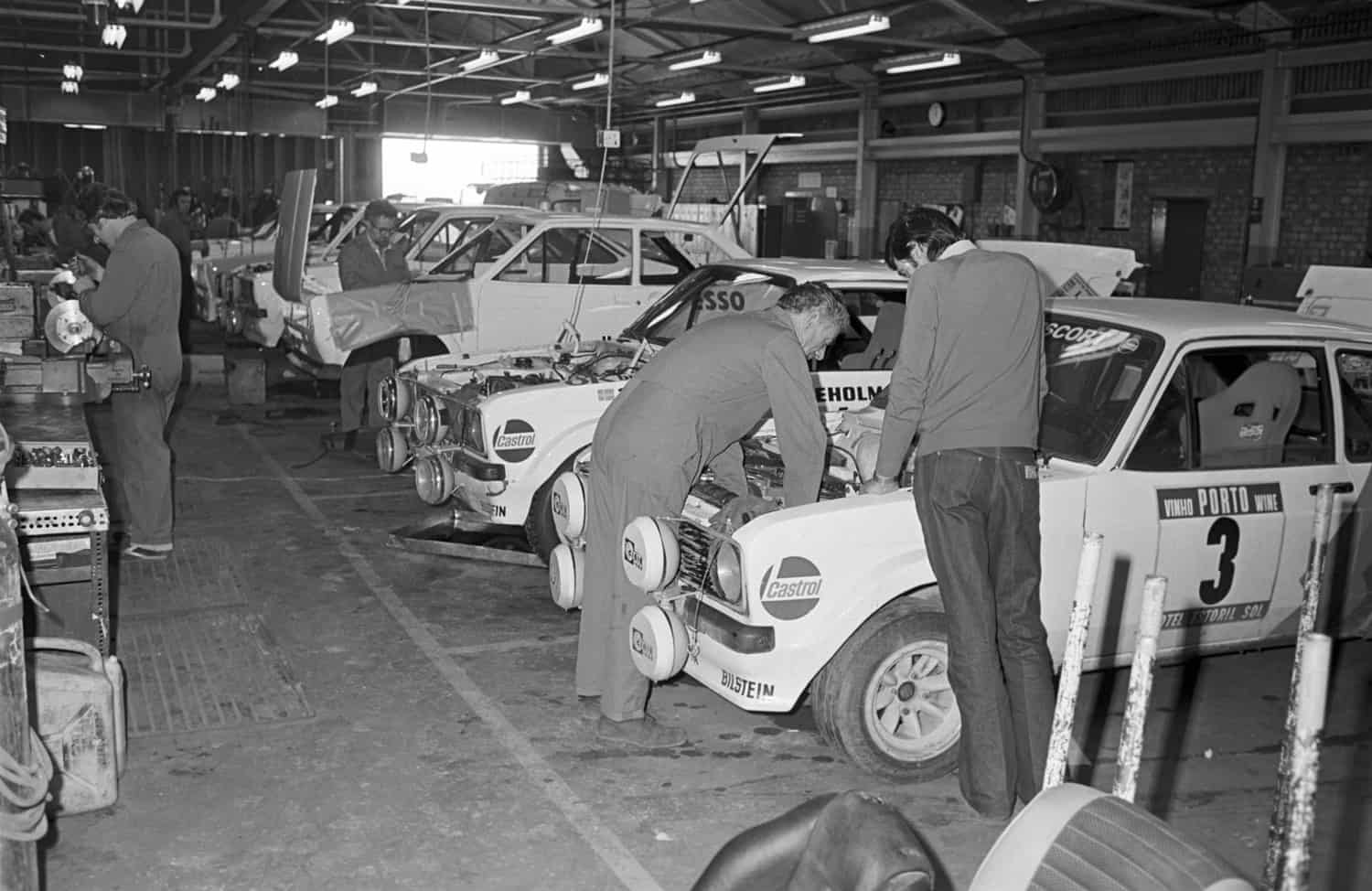 Works Escort MkIIs being built at the Ford competitions department at Boreham in the UK. Photo: Martin Holmes

Closer to home, Greg Carr drove a locally prepared RS1800 to the 1978 Australian title, but it was in private hands that the Escort really shone through. Like the ubiquitous Datsun 1600, there was a seemingly endless supply of aftermarket, go-faster bits that you could add to the MkII in order to make it a rally rocket. However, whereas the Datsun was really only much loved in Australia, Escort bits were readily available the world over, meaning the number of cars on the stages increased rapidly. Ford’s motorsport parts book was a treasured piece of paperwork in the 1970s and early 1980s – like a candy store for a rally driver! If you wanted an Atlas limited slip diff with a 5.1:1 ratio? No problem. A four or five-speed close ratio gearbox or a disc brake rear end? Sure thing. You name it, you could get it from Ford’s parts guide for a MkII rally car. As a result, it didn’t matter what country you were in, there were Escorts winning stages, winning rallies, and celebrating championship successes. And it went on and on for years. Even when four-wheel drive and turbocharging took over world rallying and the rear-drive MkIIs were left in their dust, privateers continued to strap themselves in to a car that was fun to drive, easy to tune, simple to upgrade, and sounded great too. 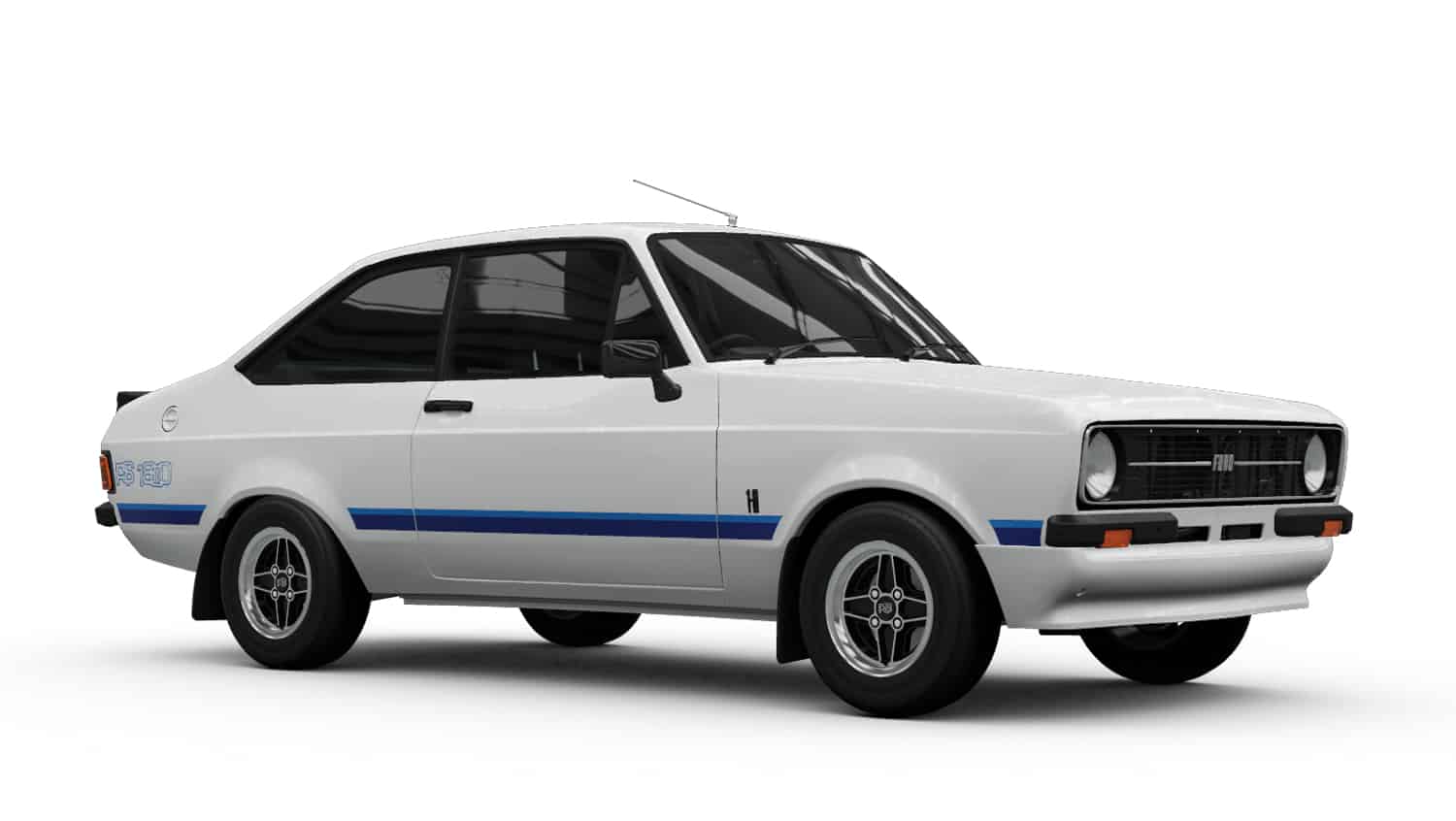 A road-going version of the limited edition Ford Escort RS1800.

The RS1800, with its raucous, sweet sounding BDA engine, was the pick of the bunch, but success was also easy to achieve in 2-litre Pinto engined Escorts. Or, if you liked a challenge, you could run a 1.6 or 1.3-litre variant as well. Years passed and the number of MkIIs on the stages dwindled, but then the emergence of classic rallying in the 2000s saw the love for the MkII rekindled once again. Even the great Colin McRae wanted a latest spec, all-singing, all-dancing MkII of his own.

Nowadays, you can build a brand new MkII from scratch, including new, re-manufactured bodyshells, and with the mod-cons, like power steering, a sequential gearbox and remote canister suspension.

It’s a far cry from the works cars of the 1970s which, in comparison, now seem like a Fiesta R2 when compared to a Fiesta World Rally Car. Perhaps the MkII’s biggest selling point, aside from its tune-ability, has been its handling. They’re easy to drive, easy to ‘chuck’ into corners, and even easier to control in seemingly un-retrievable slides. 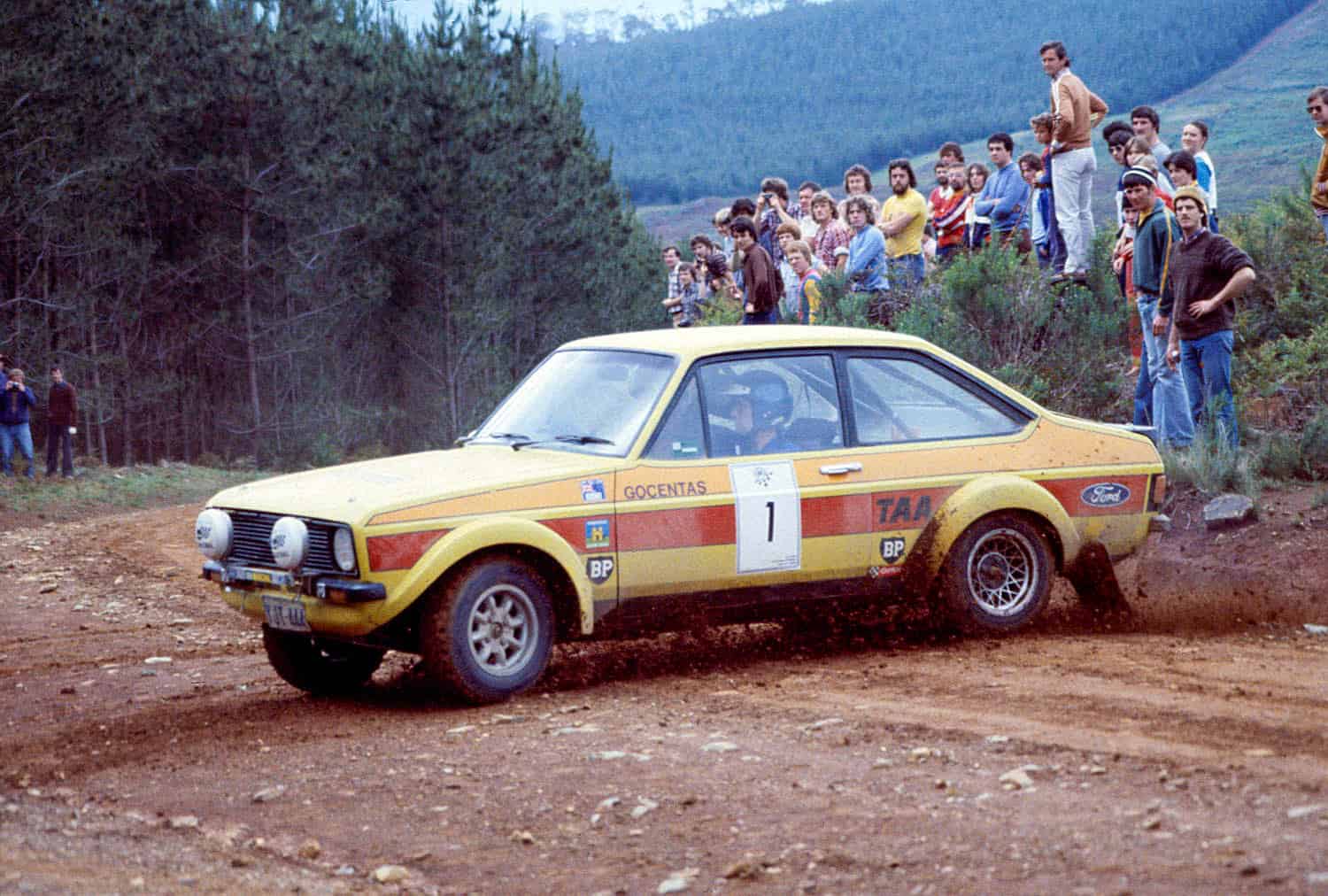 If you’ve never driven one on gravel, you need to do it, at least once. Find an abandoned piece of road with a nice corner, throw the MkII into it, and you’ll soon know what I mean. It’s rallying in probably its most purest form. Forty years on, trends come and go in rallying, as do manufacturers and different models of car. But the Escort MkII has remained a staple part of the rallying diet for thousands of drivers around the world, and it shows no signs of abating. Happy 45th birthday ‘Brenda’. 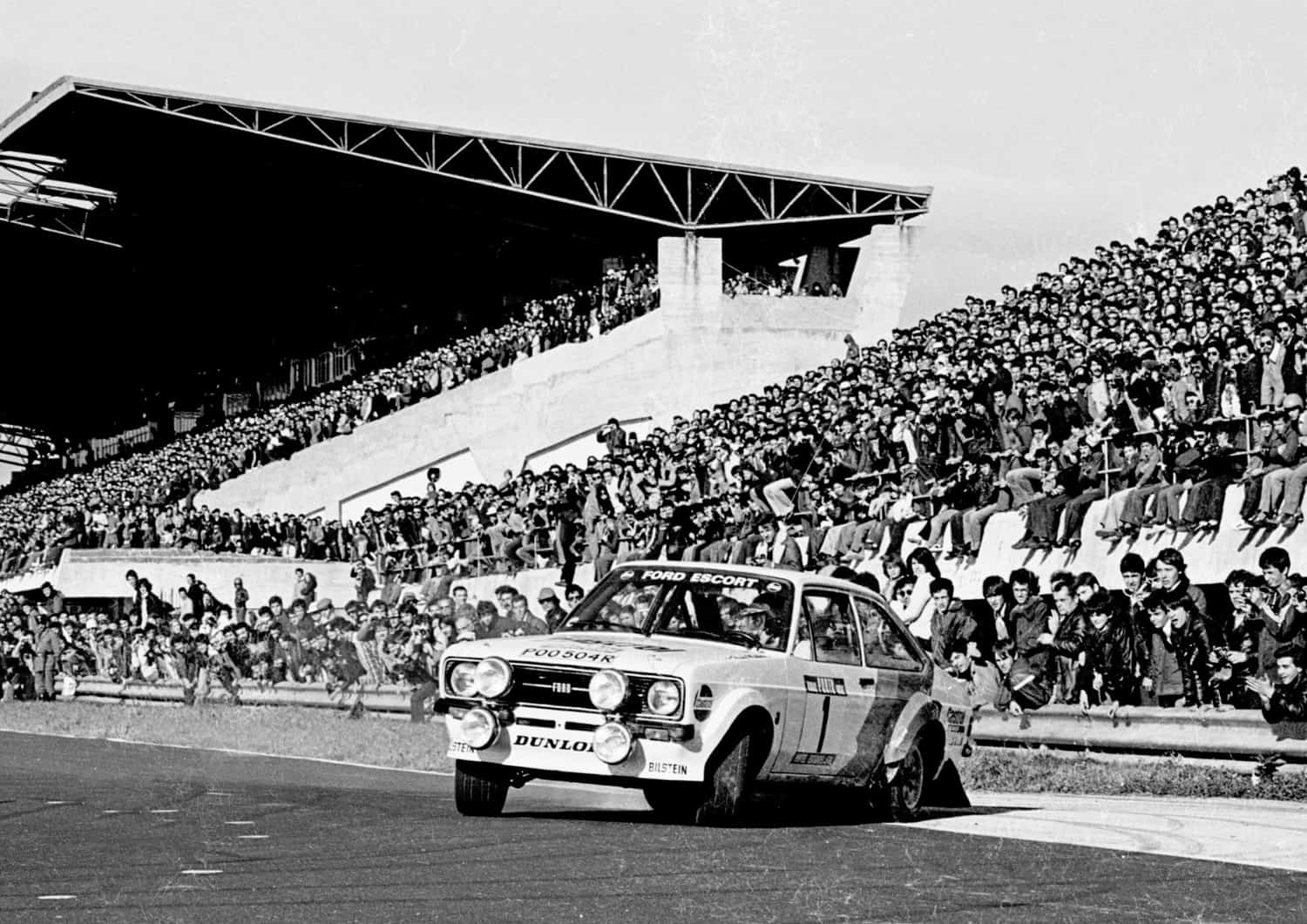 Hannu Mikkola showing just what a MkII can do in front of Portugese rally fans in 1979. Photo: Martin Holmes 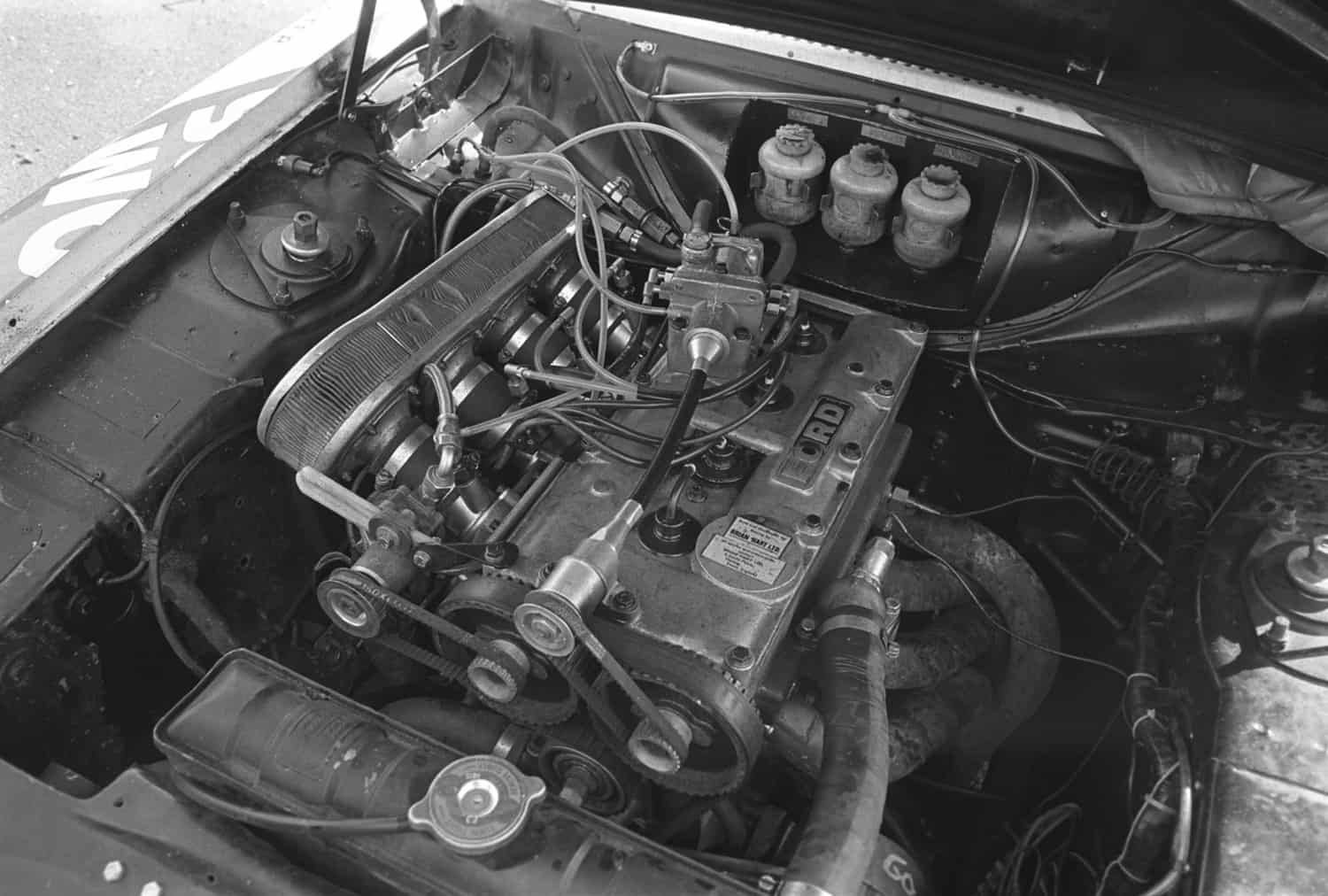 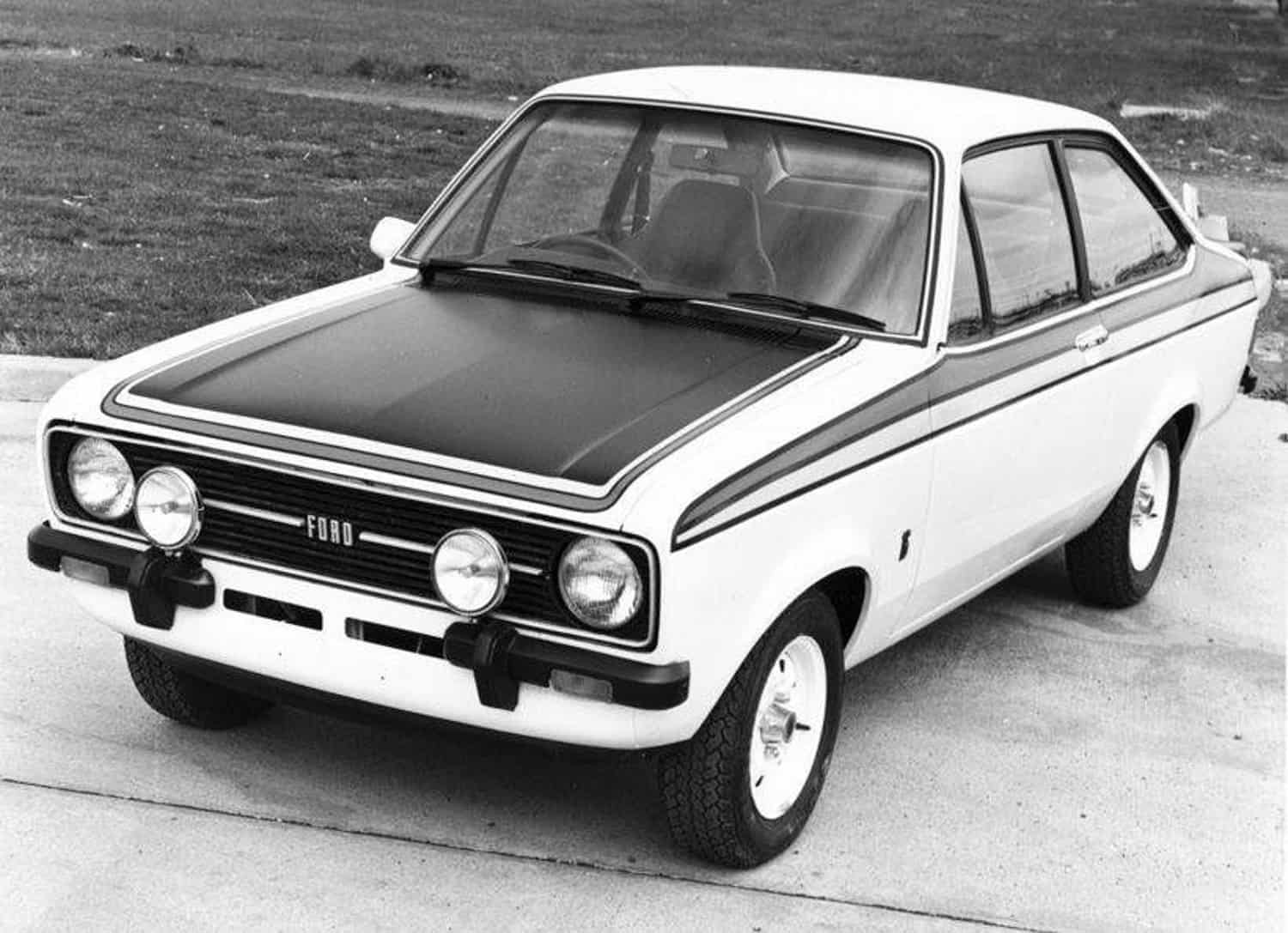 Ford's limited edition "Escapee" was on sale in 1976 to coincide with the Southern Cross Rally. 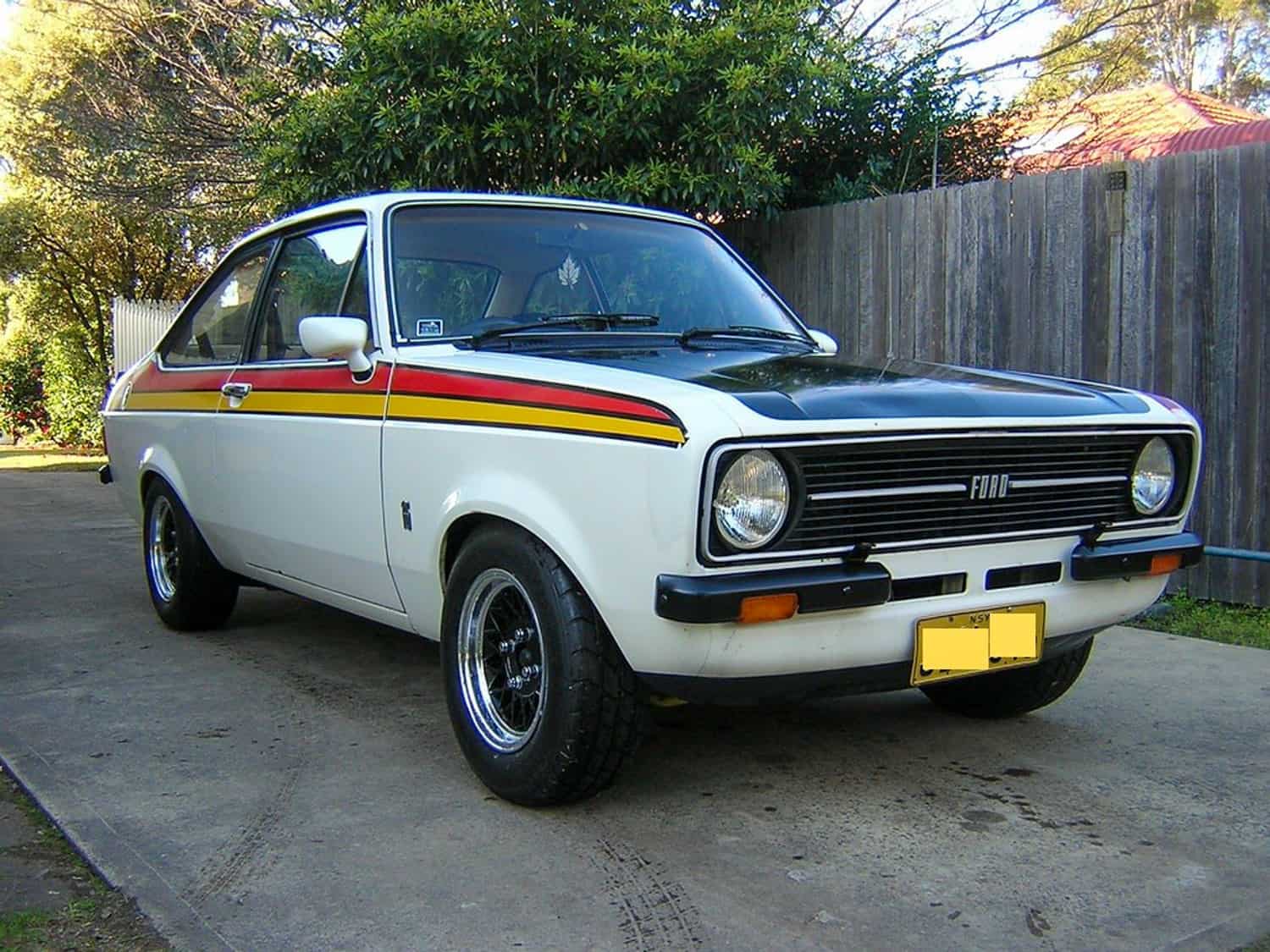 The limited edition "Escapee" is now a much sought after Escort MkII in Australia. Photographer: unknown 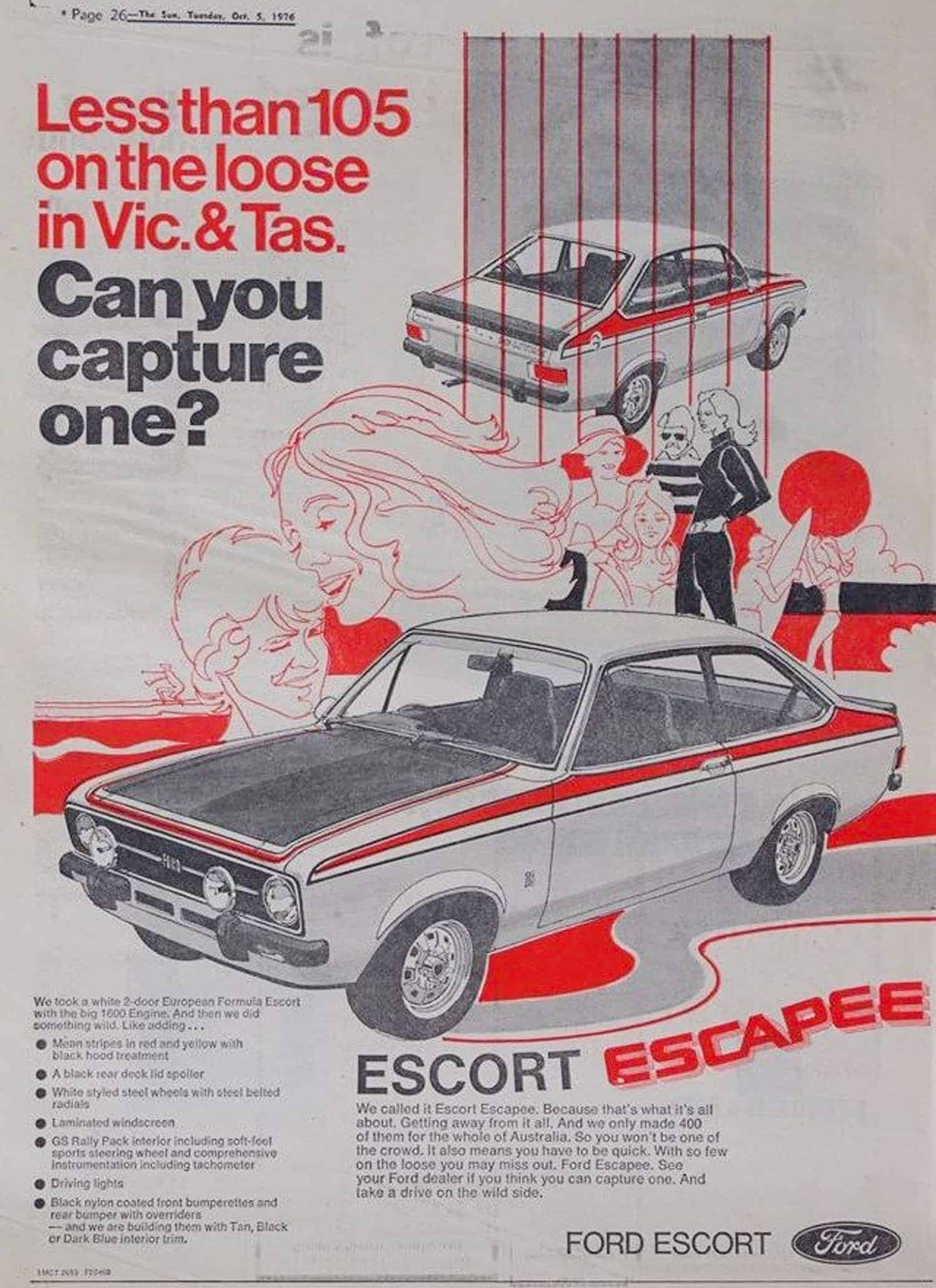 A full page newspaper advertisement for the Ford Escort Escapee in October 1976. 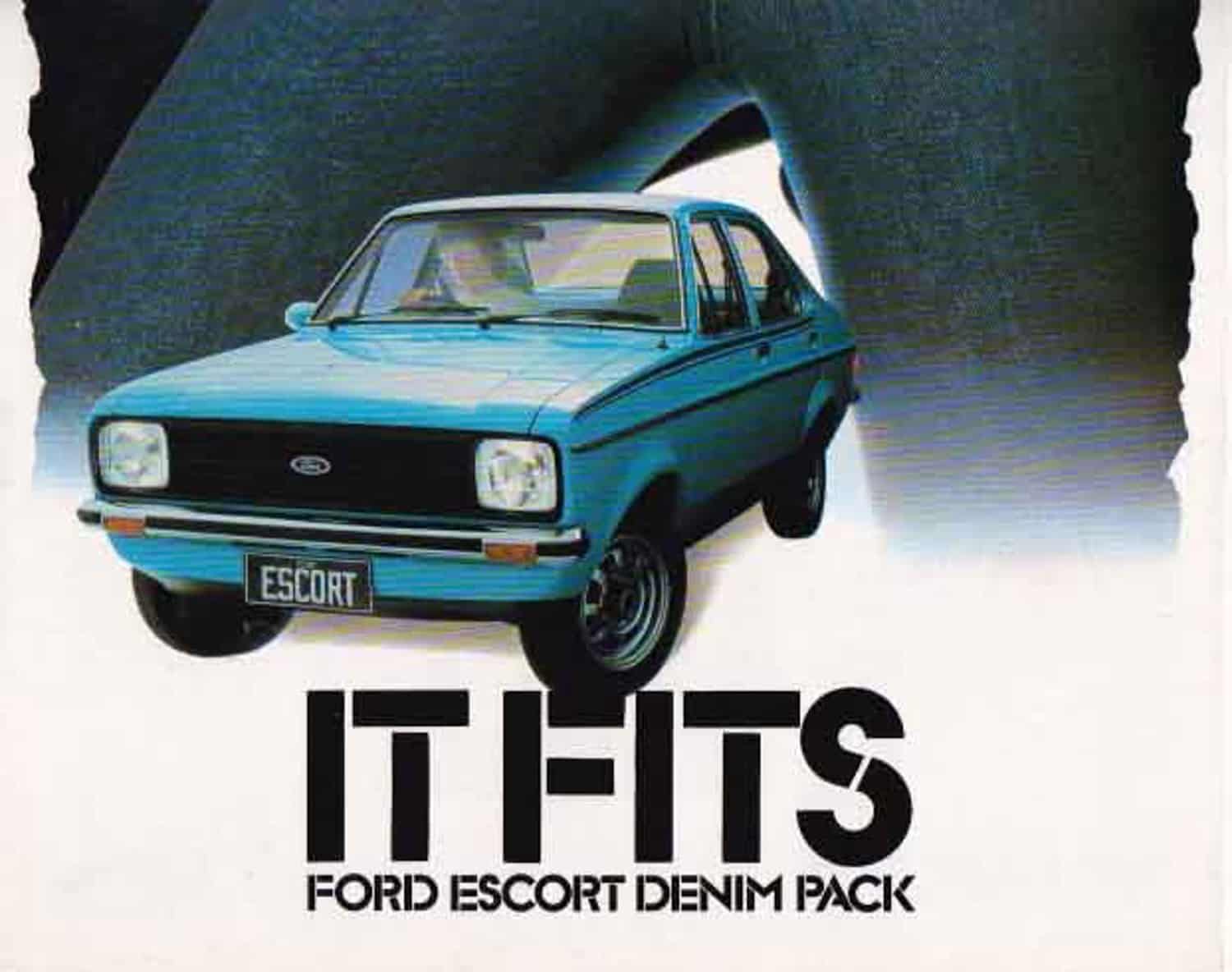 Ford Australia even did a "Denim Pack" Mk11, with two pairs of free jeans thrown in for good measure .... 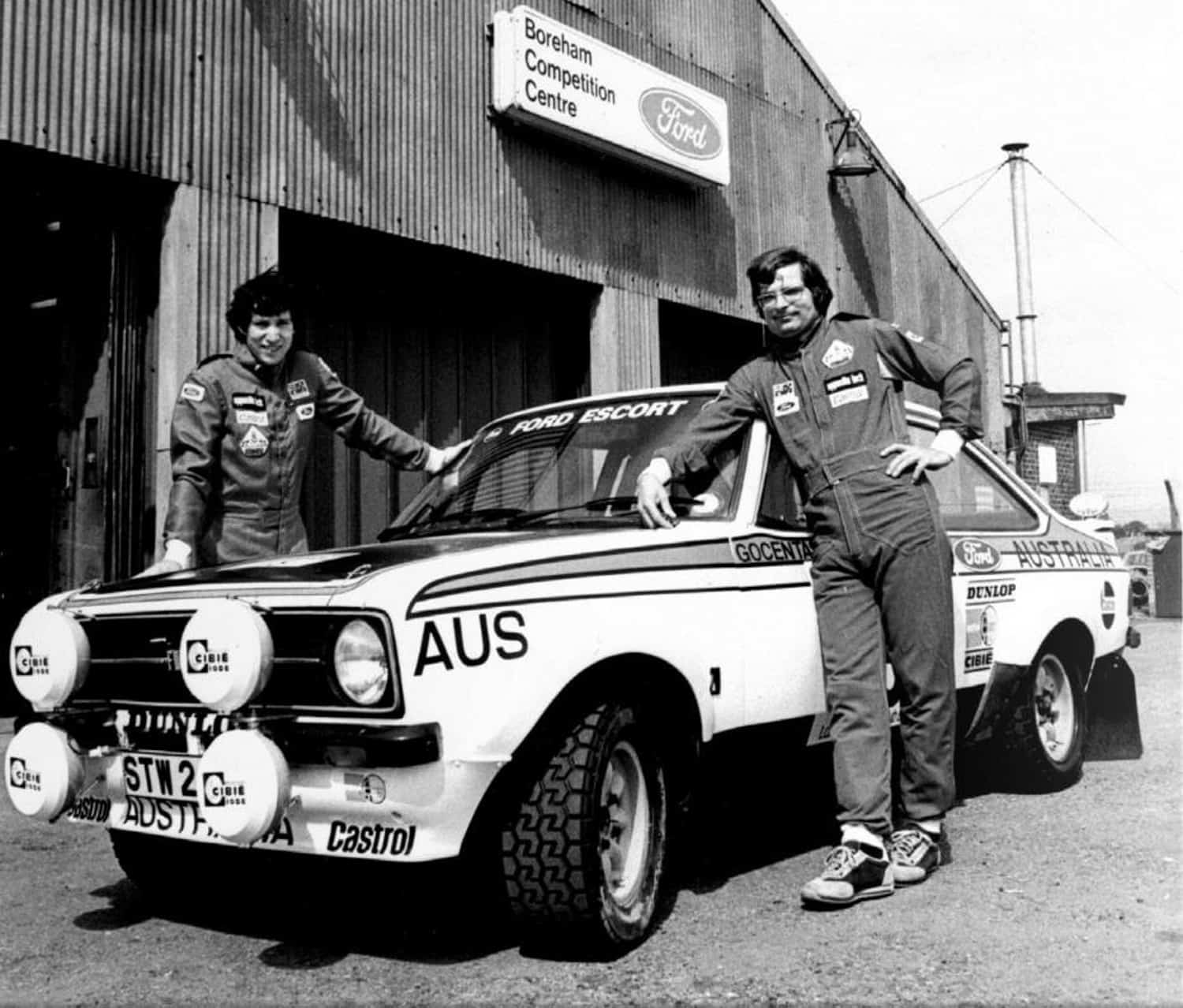 Aussies Greg Carr and Fred Gocentas drove a UK-built Escort on the RAC Rally. They're pictured here at the Boreham Competition Centre.