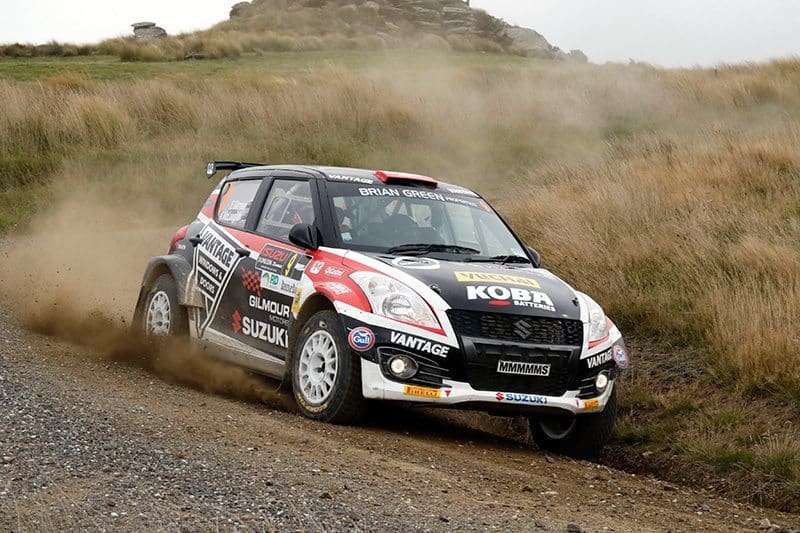 Dunedin driver Emma Gilmour experienced the tough hand that rallying can deftly dish out – with a final stage puncture deflating her hopes of a podium finish in the Drivesouth Otago Rally today.

Emma came out firing in her Vantage Windows and Doors Suzuki Swift AP4 today, with top five finishes in the first seven stages of the day, which saw teams travel north of Dunedin.

She and Anthony looked to have third place in the bag going into the last 37km Nenthorn test, with nearly a 50sec buffer over fourth-placed Rangiora siblings Matt and Nicole Summerfield.

Disaster struck about halfway through the stage when the front right tyre of Emma’s Suzuki went flat.

Anthony says that if they had only 10km to go in the stage they would have continued without changing it but they still had more than that distance to travel.

The difficult terrain where they had to park up to change the tyre meant they haemorrhaged time and finished the rally in 8th in the New Zealand Rally Championship category.

“We couldn’t get the car up on the jack and there wasn’t a good area to do it but we just kept persevering. I’m bitterly disappointed not to have been able to bring home a podium result in my local rally but we will regroup and be back fighting hard at Rally Whangarei in three week’s time,” Emma says.

“The positives to take away from this event is that the effort the team has put in over the off-season has paid dividends and we’ve had a great step up in consistent speed.”