A busy lead up to the New Zealand Rally Championship just got busier for Kiwi, Ben Hunt, with news he will fly to America next week to test with the Olsbergs MSE team for the upcoming Global Rallycross Lites series. 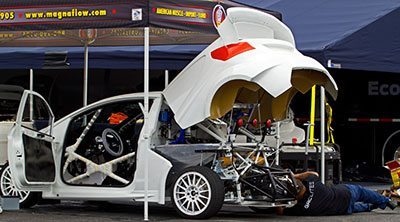 For Hunt, the opportunity of the test, which will be held at Lake Elsinore in California, came about after local rally drivers had the chance to show their stuff at the recent 4 & Rotary nationals, which featured a temporary Rallycross track for the first time. Hunt’s driving caught the attention of David Ridden, who organised the opportunity to test with the Olsbergs MSE team, a leading force in the Global Rallycross scene.

“This is a really exciting opportunity to have a crack at something a bit different for us,” says 25-year old Hunt. “While rallying is still my passion, we certainly have to look at any opportunities that come up and this is a fantastic opportunity to put ourselves on the world stage.”

In addition to the test, Hunt is hard at work rebuilding his Subaru Impreza for an assault on the 2014 New Zealand Rally Championship. Having won the Group N two-wheel drive title for three consecutive years, Hunt stepped into the four-wheel drive Impreza for 2013 and recorded four podium finishes, including an outright round win, on his way to fourth place in the series.