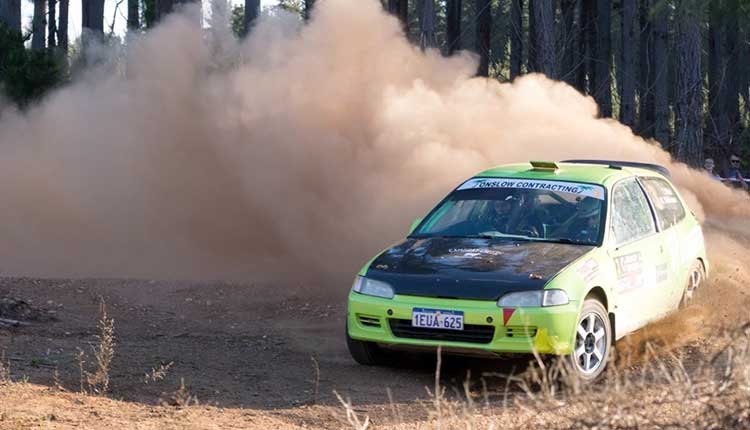 The Carrington’s Traffic Services Safari Rally is the penultimate round of the 2WD, Clubman Masters and Clubman Cup Championship.

Clerk of Course Neil Trethhowen said that the rally wouldn’t favour a particular car or driver.

“The stages are mixed with some fast wide open tracks through pine forest and technical tight and twisty stages through bushland – typical Safari stages. Conditions are mixed with some of the bush tracks rutted with water damage from recent rains, yet the fast open stages are in excellent condition, better than some of our state highways,” the Clerk of Course said.

Wilde / Kirkhouse took the lead of the WARC when they won the first event, the Trade Hire Kin Kin Rally, which was the first outright win for a two-wheel drive car for 23 years, since multiple WA State Rally Champion Bob Nicoli finished fastest in his Daihatsu Charade.

Wilde said he is excited and feeling good going into Safari.

“The car is in great shape. We’ve done the maths and we have to finish third to win the championship, so that’s our goal. We plan to attack this rally the same as all the rallies we’ve done this year. We’ll be keeping a close eye on our position won’t be taking any unnecessary risks but of course if there’s an opportunity for a win, we’ll be going for it,” Wilde said.

O’Dowd said he plans to push for the WARC title despite the rough conditions that Carrington’s Safari is renowned for.

“It’s a really technical rally and it’s going to be a fight to the end but with 80 points available for a win, there’s still plenty to fight for,” O’Dowd said.

“What Ken and I need is a strong finish and a little bit of luck so we can steal the championship.”

For this event, third-placed Oxley will have a new co-driver, Stephen Vass, because his regular co-driver Michael Wood is overseas.

“It’s going to be a challenge for Stephen [Vass] as he’s not been my co-driver before and my notes are backwards to what 70 percent of field use, so it’ll be interesting,” Oxley said.

“But with rallying, it ain’t over til it’s over, so we’ll be pushing for the win regardless.”

Although ineligible for WARC points, Walkem Motorsport’s Marcus Walken and co-driver Glenn Macneall will be using Carrington’s Safari to test their Racetorque prepared 2013 Peugeot 208 Maxi ahead of Rally Australia, the last round of World Rally Championship held in Coffs Harbour on the NSW mid-north coast in November.

In the 2WD Championship, Wilde / Kirkhouse have it already won with two rounds to go; their 184-point lead impossible to beat.

“It’s a huge achievement to win the 2WD Championship and I’ve learned a lot. Now our focus is the outright title,” Wilde said.

The Carrington’s Traffic Services Safari Rally will take place on Saturday 14 October 2017 in and around Chidlow, about 50 kilometres east of Perth CBD.

For information on spectator points, or visit http://www.rallywa.com/rallyevents/carrington-safari/