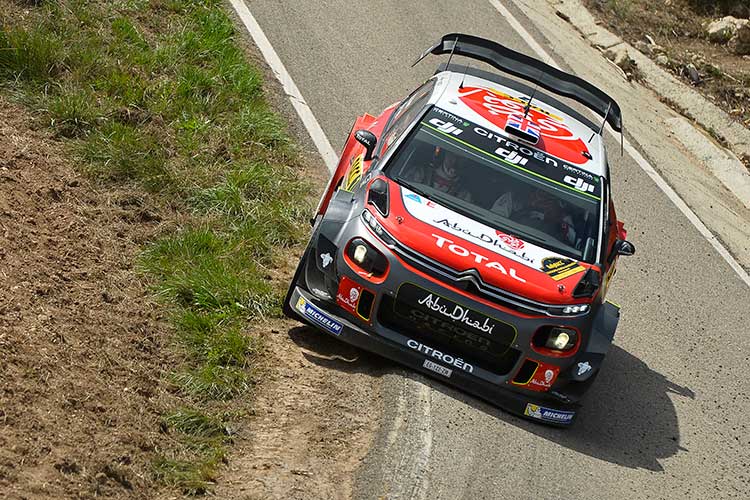 Kris Meeke cuts a corner in his Citroën on the way to victory in Rally de España.

Meeke finished 28 seconds ahead of Ogier after leading the 11th round of the championship since the rally switched from a gravel surface to tarmac on Saturday morning.

Despite his placing in Spain and a round to come at Wales Rally GB in three weeks’ time, Ogier may have to wait to claim the title until the final round at Kennards Hire Rally Australia on the NSW Coffs Coast on 16-19 November. The Frenchman has a 37-point lead over Tänak and 38 over Neuville, with 60 points still to fight for.

But more likely is that thanks to the M-Sport drivers’ efforts, their team in Britain will earn the handful of points required to clinch the manufacturers’ championship for the first time as a privateer operation.

Meeke and co-driver Paul Nagle set fastest times on nine of the 19 stages, run on roads around the coastal resort of Salou .

The win was their WRC career-fifth and second this season, after Mexico. But it came after a traumatic mid-season for the team, during which frustrated team management dropped Meeke for Rally Poland after multiple crashes and Andreas Mikkelsen and Sébastien Loeb were employed to trouble-shoot handling problems with the Citroën C3 car.

Nagle added: “It’s been a difficult period for myself and Kris over the last number of rallies, but this weekend was something special. We were under massive pressure starting the rally to put on a good performance and when that car got on to the Spanish tarmac yesterday morning we were away and this morning was incredible to have five fastest times.

“A massive credit to the team – they put in tireless hours to get this car right for this rally. It’s been a massive weekend, a lot of weight off my shoulders and Kris’s.”

Leading after Friday’s gravel section, new signing Andreas Mikkelsen and Dani Sordo both retired on Saturday – they re-joined on Sunday but finished well down the overall order – and Neuville was scoreless for the second consecutive round after breaking his suspension on the final morning.

“This has been a difficult weekend for the whole team and certainly not an acceptable one. We asked the drivers to give everything this weekend, which they have done,” team principal Michel Nandan said.

“There is still a small glimmer of hope for Thierry in the drivers’ championship, but we have to accept that the manufacturers’ title is all but over for us now.”

Tickets for the closing WRC round at Kennards Hire Rally Australia are on sale now at www.ticketek.com, with a 2-for-1 offer on a $99 three-day pass available until 31 October.