Bathurst’s Ian Plenderleith, teamed with co-driver Mel McMinn from the ACT, have piloted their Mitsubishi Lancer Evo 3 to a dramatic one second last-gasp victory at Round 2 of the PipeKing Southern Cross Rally Series.

Ian Plenderleith had to push hard for victory in his Lancer Evo 3. (Roy Meuronen Photography)Queenslander Tom Dermody, with Eoin Moynihan, set a cracking pace in his classic Ford Escort RS1800, only being caught at the eleventh-hour.

The Carabost Forest had not seen rally action for 23 years, and the organisers had left the toughest stage to last.

Reminiscent of the infamous Pikes Peak Hillclimb, Argyle was set as 12km of ridge top gravel roads in a forest that had recently been clear-felled. With huge drops on the outside of most bends, the stage was not for the faint of heart.

This was the first time that either crew had seen the stage, as the event was route-charted – not pacenoted. Adding to the drama, both crews were managing minor issues, with Plenderleith out of brakes, and Dermody out of tyres!

With both crews on maximum attack, Ian Plenderleith and Mel McMinn claimed the five seconds they needed for victory – winning the stage by exactly five seconds. This was the first outright win for both crew members, and capped a solid 18 months of competition for the family-based team. 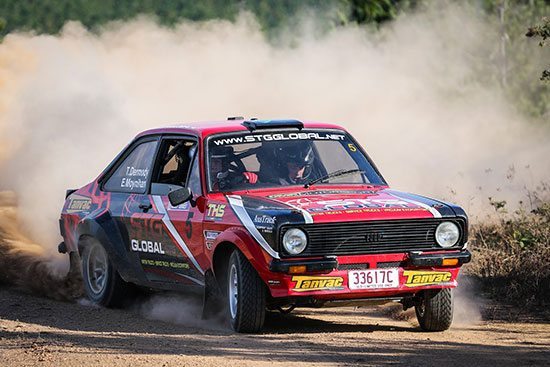 Tom Dermody and his Escort lost victory on the very last stage. (Roy Meuronen Photography)Tom Dermody and Eoin Moynihan had lit up the stages all day in what can only be described as a remarkable drive in the immaculately prepared Ford Escort. To highlight their dominance, they claimed the Classic category by over 11 minutes, the 2WD class by seven minutes and were the fastest 2WD on every stage.

The Open class placings were again close, with the Mitsubishi Lancers of Jody Mills/Daniel Ragen, both from Narrandera, and Chris Jaques/Hugh Taylor, both from Sydney, separated by only three seconds, in favour of Mills.

The series heads to the iconic Bega Valley Rally for Round 3 in June. Competitor and spectator details can be found at www.amsag.com.au