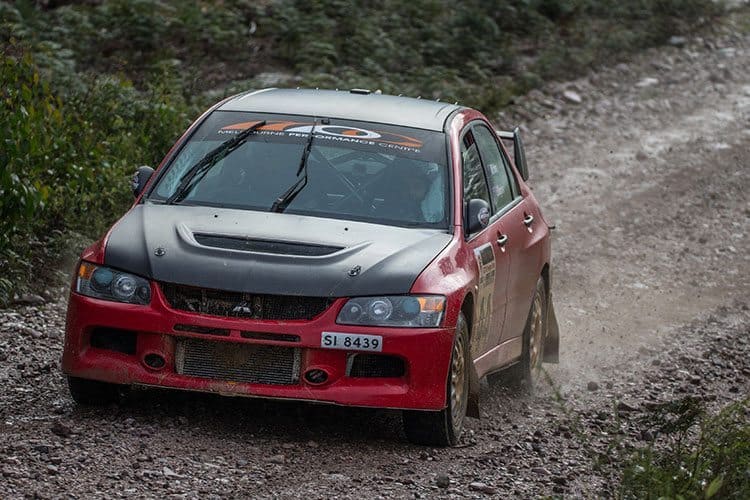 North-West brothers Eddie and Steve Maguire, from Elliott, have scored an historic 1-2 in the Tasmanian Rally Championship Series following the fourth and final round, the Southern Safari, at Southport.

Eddie Maguire was leading the series heading into the final, but needed to complete the first heat of eight stages in his Mitsubishi Lancer 9 to wrap up his first state championship.
Maguire, and navigator Michael Potter, were on the pace early, before a puncture on the fifth stage put a dent in their overall standings.

However, they responded emphatically to win the next stage and finish the first heat in fifth outright, clinching enough points to wrap up the championship in the process.

With the title in the bag, Maguire promptly withdrew from the remainder of the event to make the long trip back home to the North West Coast for the impending birth of his first child, and was eventually classified as finishing the event in 19th overall.

The first heat was won by Huon Valley pair Bodie Reading and Alex Malcolm in a Subaru Impreza WRX STi, finishing 45 secs ahead of Steve Maguire and Hobart’s Stuart Benson in a Mitsubishi Lancer Evo 5.

The second heat only involved two stages, but both were significantly longer than previous stages and of a similar total distance to the preceding eight first-heat stages.

Devonport crew Tim Auty and Josh Sutcliffe relished the longer stages in their Mazda 332 GTR, with the third fastest time on stage nine and then won the 10th and final stage, to win the second heat and finish third overall, just six seconds behind Steve Maguire and Stuart Benson.

First heat winners Reading and Malcolm finished fourth in heat nine and were second fastest on the final stage, to finish third for the heat and claim the round victory.

Significantly, Steve Maguire’s second place overall was good enough to elevate him to second in the championship behind his brother, while fourth-placed former Targa Tasmania champion Jamie Vandenberg and Adrian Hodgetts, in a Mitsubishi Lancer Evo 5, scored enough points to claim third outright for the championship and complete a podium clean-sweep for North West Car Club members.

While Eddie Maguire had wrapped up the drivers title, it was Adrian Hodgetts who took out back to back navigator’s championships with some consistent strong results during the season, which was helped when Maguire’s regular co-driver Potter missed a round earlier in the season.

Meanwhile, further back in the field Hobart duo Matt How and Nathan Walker, driving a BMW 325i, won the two-wheel-drive section of the Southern Safari, with fastest class times in stages five and nine.

Fellow Southern crew Aiden Peterson and Gavin Johnson were leading the championship heading into the final round, but encountered mechanical dramas with their Daihatsu Charade, which ultimately cost them the 2WD championship.

This year’s championship also included a new category for non-turbo Subaru Impreza RS cars, the Buckby Motors Subaru Challenge, which was won by yet another NWCC team. The Somerset-Devonport combination of Nic Grave and Craig Sheahan finished second on the day to Launceston’s Ben Newman and Steve Glenney to snag enough points to claim the series.

Eddie Maguire is a former Tasmanian Rally Championship who’ll mix it with the ARC’s best.