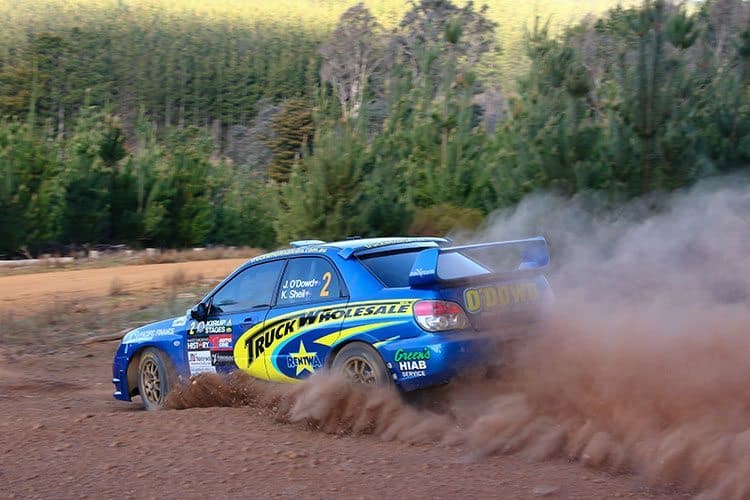 He and co-driver Ken Sheil remain second in the championship after the event, which was the penultimate round of the WARC.

The rally, run in the state’s south-west on Saturday, was one of the hardest events of the year for O’Dowd who commented: “It was a tough day at the office.”

The Kirup Stages started well for O’Dowd, who was second fastest on the opening stages.

At the first service, however, the service crew, discovered a hole in the casing of the rear differential. The decision was quickly made to replace the complete unit there and then, rather than risk patching it.

“The Maximum Motorsport team did well under pressure to replace the diff, minimise any time loss and give us the best car they could for the remainder of the event.”” O’Dowd said

After the successful changeover, O’Dowd was second fastest on stage three, and in second outright. But drama was just around the corner.

“I ran wide on a corner on stage four and the back wheel of the Subaru hit a tree stump,” O’Dowd said.

The off meant he dropped to fifth, but determined to finish strongly, O’Dowd clawed back time by winning both of the two final stages.

With that, and other drivers, including championship leader Tom Wilde, experiencing troubles O’Dowd’s fifth place quickly changed back to second, behind eventual winner Steve Oxley.

“For some reason this event caused trouble to most teams and about 50 per cent of the state field didn’t end up finishing” O’Dowd said. “I’m glad we made it through.”

O’Dowd, who’ll contest the final round of the WARC next month, is first getting ready for another CAMS Australian Rally Championship outing.

Next weekend, he’ll compete for the first time at the Lightforce Rally SA around Adelaide.

Lightforce Rally SA features both hard-packed shire roads and rough forestry stages. The service park is based near Mount Crawford and the event takes in the scenic roads in and around the Barossa and Murrayland regions.