Team MRF driver, Gaurav Gill, has bounced into Asia-Pacific Rally Championship (APRC) contention again after a dominant win in the Malaysian Rally, round four of the championship.

Driving a Skoda Fabia S2000, the Indian driver took an impressive 13 minute victory after his team-mate, Czech driver Jan Kopecky, retired on day one after rear suspension trouble saw him lose a wheel.

He and Australian co-driver, Glenn Macneall, now trail Kopecky and Pavel Dresler by just eight points, after being 39 points behind their team-mates heading into the Malaysian event.

In conditions that were as tricky as predicted, Gill showed his experience of the event was of vital importance, and he is now tied with Kopecky with two wins each this season.

“It was a great result for us and a great way to bounce back into the championship,” Gill said after two days of tough competition in Johor Bahru. “It was very important for me and the team.”

“It’s definitely one of the toughest rallies in the world I think, because of the climate, the terrain and so on.

“This rally particularly was very, very rough this year, because of a lot of rain prior to the rally and the roads were quite washed off, and they expose a lot of stones and a lot big ruts. So definitely, it was a big challenge.”

After leading the championship heading into this rally, Kopecky was hoping to win first time out in Malaysia, as he had done in Australia in June, but it wasn’t to be. He was forced into retirement during stage five on day one when his suspension was damaged and subsequently caused the left rear wheel to fall off.

He returned to the rally on day two, winning the day and claiming vital championship points that has seen him retain his APRC lead.

“Yesterday we had a nice lead, over one minute, but unfortunately a suspension part broke after small jump,” Kopecky said. 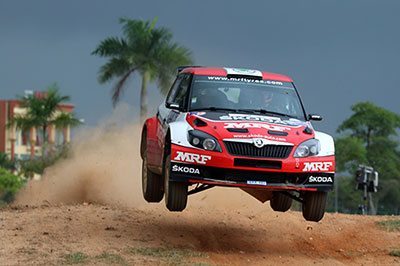 “And today at least we score maximum points because we won the second day and still we are in the lead [of the championship]. The even more important thing for me was we had really good pace this weekend, because this rally was again new for us.”

Team MRF boss, Lane Heenan, said that it was disappointing for lose Kopecky on day one because he had shown he had the speed, but Gill was there to pick up the lead.

“We expected that Malaysia was going to be tough, and it certainly was, with unpredictable weather and rough roads adding to the mix,” Heenan said.

“Our goal was to win the event, and we’ve done that with Gaurav and Glenn. Jan and Pavel showed their speed again, and while luck wasn’t on their side, the fight for the championship continues.”

The next rally on the APRC calendar is Rally Hokkaido, held in northern Japan, from September 27-28.