It was a faultless performance by Ian Menzies and Robert McGowen in the SR Automotive Manumbar Rally, the second round of the MRF Tyres Queensland Rally Championship.

The Mitsubishi Evo 9 was dominant on the stages that were held in the forests outside Nanango and Manumabr in the South Burnett region.

This event, unique insofar that the service park moves from Manumbar to Nanago and back to Manumbar, was delayed from its original April date due to Cyclone Debbie.

This did not dampen the enthusiasm of organisers, Simon and Margot Knowles, who rescheduled the event. The SR Automotive Manumbar Rally had been recognised by CAMS for the 2016 event and the 2017 event was held over 10 stages with 149.24 competitive kilometres.

The car was only purchased in December and a lot of work went into the car to get it to Manumbar. 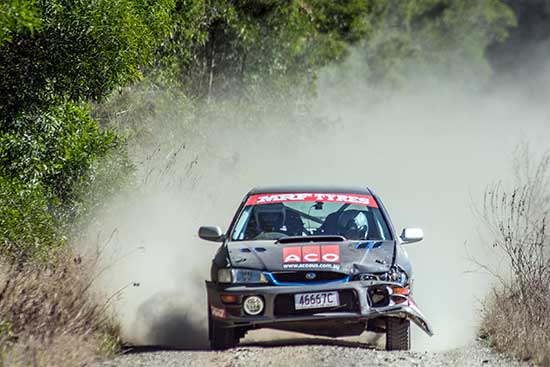 With new entries like the Corolla, the Queensland Championship looks in good health as 48 cars were entered for the rally. However, there would be attrition during the event, particularly in the stages around Nanango.

Marius Swart and Alan Stean had another disaster, not making the start line for the second time in two rallies this year.

It was almost a similar situation for Gerard McConkey and Erik Johnsson who had an alternator failure on the way to the Nanango Service Park before the first stage.  They would arrive with just minutes to spare before the compulsory driver’s briefing.

The situation would be worse for Kim Ackworth and Ian Swinbourne.  Having had a nightmare time in the lead-up to the event, diagnosing issues and replacing clutches, the Subaru Liberty would lose third gear in SS3.

Worse was to follow with an engine fire bringing their rally to an end between the flying finish and stop line on the same stage.  The engine problem came after a slight touch on a bank that had greater consequences than originally thought.

Stage three would also bring Cameron Henry and Michelle van der Wilk’s rally to an end after a small off resulted in an overheating engine. In the end they managed to melt a couple of spark plugs and while the car is repairable, they were out for the rally.

The pair had been having issues after they had a broken rear differential mount. This resulted in handling problems which led to the off.

Of note, this was van der Wilk’s first DNF in her career, having won the Rally NSW competition to become a co-driver.

John Keen and Ray Priest would also suffer gearbox problems in their Datsun 1600.

Other front runners also encountered problems with Melinda Bergmann and Larissa Biggar struggling with handling issues with their 2001 Mitsubishi Evo. They did bring the car home eighth in its second event.

In the end, Menzies won and Morton second.  Todd Webster and Ryan Preston’s Subaru put in a measured performance to take third overall.

Tony Scott and Jay Davidson followed up their incredible Wowan podium with fourth in their 1982 Toyota Corolla.  Craig Aggio and Peter Stringfellow’s 1988 Toyota would round out the top five.

The next round of the MRF Tyres Queensland Rally Championship will take place in Imbil on 12 August.