Round three of the 2017 Autosport Club Gravel Sprint Series was held recently at Mt Alexander in North Canterbury, NZ.

Matt Penrose, Subaru Impreza WRX.40 drivers took on the challenge of the 4km road which sweeps along a valley and through three concrete bottom Fords before climbing steeply for the last kilometre. Many of the corners in the first three kilometres sweep gently, but there are a couple of corners that look the same but are tight and there are also several narrow cattle stops all waiting to catch out drivers.

Matt Penrose in his early 1990’s Impreza, Jeff Judd in a similar Impreza and Mike Tall in his 4WD Mirage Turbo would set the front running pace, all having high power to weight ratios and no shortage of bravery to use that power.  Penrose had been beaten into third at round two after a minor error in the final run and arrived at Mt Alex in a determined mood. He would lead the way from the start taking a one second advantage in run one over Judd, with Tall under a second further behind.

Matt Summerfield, Ari Pettigrew, Garet Thomas and Richard Baddock featured in the second tier. Summerfield was using his ‘Driving School’ Legacy while Pettigrew had been loaned Bruce Asher’s D Mack Impreza for the day. Thomas had his Evo3 in the battle and Baddock again shared Sean Haggerty’s Impreza. Summerfield used his experience to lead that group after run one, but Air Pettigrew was defying his lack of experience to take the lead after run two. 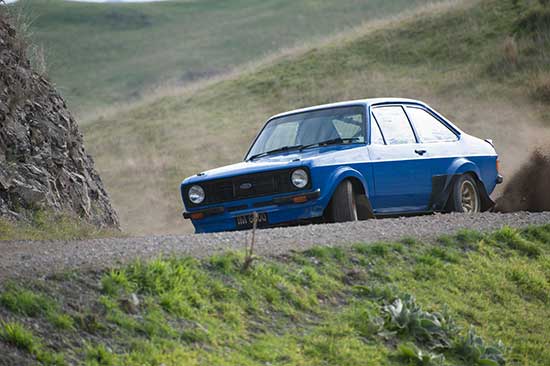 Brent Buist, Ford Escort.In the 2WD’s Deane Buist took his Mk2 Escort to the top in run one. The car expired just after the start of run two leaving everyone else the hope of getting one over Deane. Andrew Sim took up the challenge in his Fiesta with second 2WD after the first run, just ahead of Wade Henshaw’s RX7. Henshaw struck back in run two, but Deane still led the field with his run one time and Sim dropped to third so far.

In the 1600’s Brent Buist brought his MK2 1600cc BDA out to play. With a seven-speed sequential gearbox, Burt as he is known to the world, was able to flat change and keep the smaller BDA on song at all times. He too hoped he might beat younger brother Deane, given Deane was already heading home. Burt was quicker than all the other 2WD’s to win the 1600cc Class but was still slower than Deane’s single run in the final result. 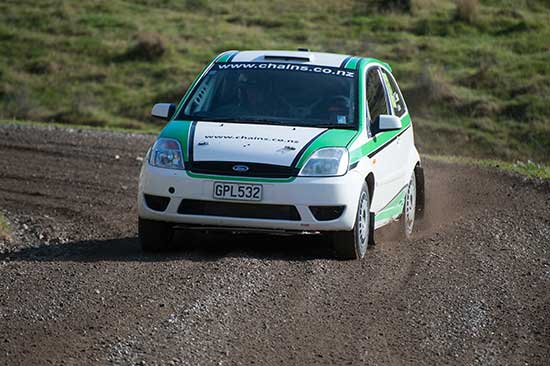 Andrew Simm, Ford Fiesta.The other 1600’s were on another page to Brent Buist. They simply did not have the cars to keep up, but would enjoy a friendly battle amongst themselves. Glen Daly was a clear best of the rest, taking second 1600cc in his Mk1 Escort and retaining his lead in the five round series. Dean Pester and Kevin Knowles fought it out for third place with Pester the victor in his Mk1 Escort ahead of Knowles Corolla.

The battle in the 1300cc Class has heated up this year with Peter Murch breaking the status quo in his Suzuki Twin Can powered Starlet. Murch would lead the class after run one, ahead of Chris Herdman’s Toyota powered Starlet and Graham Wilson’s Starlet which is very similar spec to the car of Murch. Herdman struck back in run two to take the lead, but it would be Graham Wilson who emerged the victor after the final run.

Wilson may have been spurred on by Murch turning up and setting the pace, Wilson’s victory coming by less than 3/10ths of a second over the 4km’s. Murch took second from Herdman. Ryan Blacktopp put in another good drive to bring his less developed Starlet home fourth.

Well known son of Magnum’s Mark Smith – Tim Smith had his first ever drive in competition in his Starlet. A few new car problems meant Tim Smith only completed one run, but he looked good each time he went past us before coming to a halt going up the final climb.

The final shakedown at the front of the field would decide the bragging rights for fastest competitors. In 2WD Andrew Sim got back ahead of Wade Henshaw but neither could beat the only time set by Deane Buist who won the 2WD class.

Sim was impressive to take second in Open 2WD. Henshaw came very close to binning his RX7 having over cut a corner.  Henshaw’s inside wheels flew high in the air nearly rolling the car after it hit a hole and when it came down it had those wheels off the road and over a gentle bank. Wade did very well to save it and was happy that he got third place and took home a largely undamaged car. Garry Hawkes took fourth 2WD in his BDA to retain his series lead in the class. 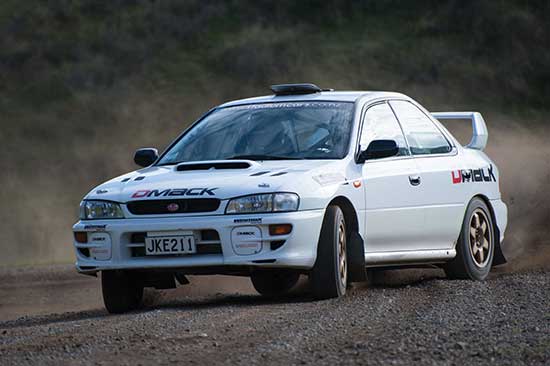 Ari Pettigrew, Subaru Impreza WRX.Matt Penrose made no mistakes to win the Mt Alex gravel sprint by a little over three seconds. That is a big margin for Penrose when you consider round two was won by Summerfield by 21/thousandths of a second from Tall. Tall just sneaked ahead of Jeff Judd to take second with Judd just over 2/10ths further back in third. Penrose now has a clear lead in the Gravel Sprint Series with two rounds to go.

The battle of the less developed 4WD’s was won by Richard Baddock in fourth place overall. Summerfield was next just ahead of Ari Pettigrew who had been leading that group much of the day. You can bet that Baddock and Summerfield were not at all keen on being beaten by 18 year old rookie Pettigrew and they got their way this time by a few 10ths of a second each. Two other relative rookies took the next spots with Garet Thomas 7th and Sheldon Bell 8th in their early Evo’s.

One of the great things about Rallying and Gravel Sprints is there is always someone for you to race whatever you might drive.  Battles throughout the field keep everyone trying hard and made for a great spectacle for those that turned out to watch. It will all happen again at round four – Ram Paddock Rd on July 16th.