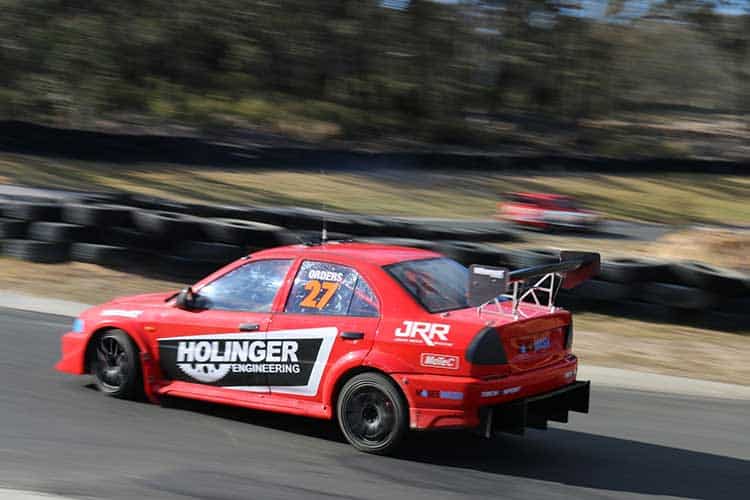 Will Orders has made up for a shocking Winton round of the RXAus.com.au Australian RallyCross Championship by powering to victory in the All-wheel-drive SuperFinal in Round 5 today at Marulan, while Mike Conway snared two-wheel-drive honours.

However, it will be the AWD class final, that preceded the main event, that will likely be the biggest talking point from the weekend thanks to a memorable performance by 16-year-old teenage sensation Troy Dowel.

A day before heading back to Finland for more RX Academy action, Dowel won a compelling AWD class final, first passing dad Justin and then race leader Will Orders after the joker lap to win in a stunning drive.

Dowel started third but got the overlap on Justin’s Hyundai exiting the Joker lap and was able to grab second mid-race.

He then briefly led Orders after the Mitsubishi jokered, though was unable to counter the straight-line speed advantage of the EVO on the run to turn one.

However, a bold move through the dirt bowl saw him get up the inside of Orders and squeeze his rival wide, taking the lead in a breathtaking move and ultimately powering home to win.

He couldn’t repeat the performance in the SuperFinal, however, Orders leading from lights-to-flag to win ahead of Justin Dowel – with Troy in third. 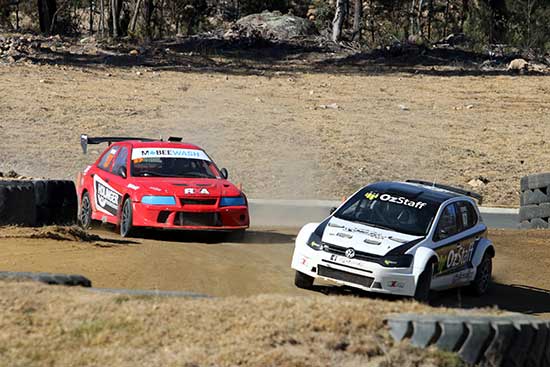 Teenager Troy Dowel was the star of the day.

Steve Glenney was a notable absentee from finals action, his TechSport EVO breaking a differential after the second heat, forcing him to the sidelines for the remainder of the action.

Arron Windus then led and punched out several quick laps to try and build his margin before he jokered on the final lap – the margin not enough to stop the flying Ford Escort to power through and take the win.

Troy Dowel and Scott Anderson battled throughout the 6-lap race, Anderson slipping past in the final minutes of the race to score the final spot on the podium to round out a strong weekend.

The pair finished in that order for the weekend with Conway putting one hand on the 2WD title ahead of the final round, while Scott Anderson scored his first RXAus podium by finishing behind Windus in third.

Mike Conway had a far more straightforward path to the 2WD final, only surrendering the lead to Arron Windus during the overlap of the pair taking their joker laps. Troy Dowel finished third to continue his superb day out at Marulan.

Cahal Carey won the Excel class after points leader Ron Bustard was forced to withdraw with mechanical issues early in the weekend.

The heat racing was hotly contested, as always.

Mike Conway won two of the three two-wheel-drive heats in his screaming Ford Escort, While Arron Windus stormed through the field to win the second, reverse grid, affair.

Scott Anderson posted his most consistent effort yet, scoring finishes of third-third-second in the three heats – including a brief stint in the lead of heat three.

Will Orders won two of the three AWD heats, though a disappointing fifth in heat two ensured any points gain over his nearest title rivals was negligible.

Jamie Sargent was the winner of that race, leading all the way in a tight affair to beat out Troy Dowel and Justin dowel.

In qualifying, Orders scorched to a Marulan lap record when he scored the AWD pole with a fluing 50.51s lap, beating Steve Glenney by 0.8 seconds and arch-rival Justin Dowel by 1.3.

Mike Conway and Arron Windus battled for the 2WD pole, with Windus edging out the class championship leader by just 0.02s to grab pole by the tiniest of margins.

The final round of the 2017 RXAus.com.au Australian RallyCross Championship will see the series’ return to Carnell Raceway in Stanthorpe, Queensland, in November.