There was an intense battle at almost every stage during this weekend’s Make Smoking History Targa South West - with many producing equal first and second places, and even three way tie situations in both the Modern and Classic categories.

The new Northcliffe stage commanded competitors give both full attention and full throttle, and was a highlight for many. Despite the pressure being on with fresh routes and close competition, competitors kept their bearings for the full 130 competitive kilometres, with no event-ending incidents over the weekend.

The top podium place was clinched by 2016 Targa South West champion Mark Greenham (#67). It wasn’t an easy win for Greenham, who thought his event may end early on Leg 1 when his Race Torque Mitsubishi Evo 9 split an intercooler hose.  In a demonstration of the camaraderie that exists within the tarmac rally community, it was 2017 Targa South West winner Will White who came to Greenham’s assistance.

“We had an issue with a split intercooler pipe on the way back from Northcliffe,”Greenham said. “We didn’t have a replacement part, so my service crew patched it up with some duct tape, some cable ties and a Redbull can.

”That saw us through another three stages before we managed to get another part. Will White got us the spare part and then ran it down from Dardanup. It would’ve been about three hours on the road for him just to run this part down so we could keep going.

“It wasn’t quite the right part, but we shoved it on there and made it fit – and we were very close to missing out on the Kunudra Stage. We got there with just seconds to spare. It all worked out, but it was pretty close on that Saturday afternoon.”

With his regular co-drivers currently overseas, Greenham paired for the first time with co-driver Glenys Stagoll who is no stranger to WA tarmac rally. The pair completed the 22 special stages in a total time of 57m45s.

“This rally I was probably a little under prepared. I just put a last minute entry in, and didn’t have a co-driver lined up as my regular co-drivers are both away overseas at the moment. So with only a week and a half to go, I got Glenys sorted and it worked out well.

“Having done plenty of rallying with husband Bill, she’s pretty experienced and she did an exceptional job. The way we call pace notes is a little bit different from what she is used to, and she adapted really well.

In second place was Blaise Paris and co-driver and wife Raechel Paris (#91). This was the third Targa South West for Paris, who was been putting lessons learned from his first attempt at the event to good use.

“The first one we did was in a Tommi Makkinen Mitsubishi Evo,” Paris said. “It was our first tarmac rally and we crashed out spectacularly. I regard it as the crash we needed to have, and we learnt the hard way to respect tarmac rallying – it’s not something you can attack with the same enthusiasm as the circuit! We returned in 2015 in a freshly built group C replica RX7 and then this year in a Porsche 964 3.8 RSR replica.

“Raechel is my wife. She wasn’t for our first Targa South West, but given she hung around after that incident and for subsequent rallies, it was clear she was a keeper!”

The Parises managed to keep David Heaton and Australian Rally Champ Steve Glenney (#36) in The Lookout Bar Bowling Bites Ford Focus RS at bay by just over a minute.

Invitational entry Denver Parker and Lachlan Beresford (#43) also returned to the event with the aim to reverse their previous bad luck.

In 2016, the team’s Elec Power Technologies R33 Skyline ran off the bridge in the Big Brook Dam stage, ending up in a creek. Apart from a minor rear end tangle with a control sign, this year’s event went very well for the team with the majority of their stage times placing among the Top 3.

“It was good to go past the bridge,” said Parker. “I think we were second on both runs of that stage - we did surprisingly well. It was a good way to comeback to it.

“We finished nine seconds behind Mark and Glenys who had us on the town stages by a couple of seconds on most runs. We had a couple of sideways moments in the second run of the town stage which handed three seconds to Mark, and pretty much sealed things up for his weekend.” 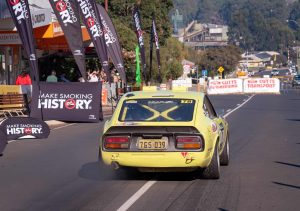 The Platinum Auto Services Wangara 1973 Datsun 240z of husband and wife team, Simon and Susannah Lingford (#78) were first to cross the finish line for the Classic category with a time of 1h1m59s. The event went smoothly for the team, who thrived in the longer stages.

“The car didn’t miss a beat,” said Lingford. “It probably used a little bit more fuel than expected, but that’s just how it is and we’ll be onto it next time.

“We try and monitor things as they are happening. If we were fast in some places and not fast in others we will try and rationalise why these things are happening - are we not quite on the notes? Or are the cars behind us just that much faster because they are faster cars? In that instance you can’t worry about it.

“We did our damage on the four longer stages and kept our nose ahead of the pack, and then it was up to them to do the catching up.

“The four new stages were our favourite – the Pemberton, Northcliffe and back. Truly staggeringly fast, technical and exciting stages.

“Susannah my wife and co-driver is still smiling and we’re still married. She really enjoyed the event. She came back out of retirement this year as a co-driver, so she is very happy so far.

“We drove the car down and now we’ve got to put all the bits back in it and drive it back to Perth.”

Missing out on the top podium spot by a mere 8 seconds was Tim Wolfe and Declan Stafford (#37) in the Dieselcraft 1974 Porsche 911 Carrera RS. While no stranger to Targa South West, it is the first time competing in the Classic category for Wolfe.

“I’ve done five or six years in the Modern category. This was our first year in Classic and in this car, and we had a ball in this category,” said Wolfe. “I’ll definitely be back next year.”

“I’ve always competed in Porsches, mainly GT3’s and this one is a 1974 911. It’s quite a bit more agricultural than the GT3, but arguably more fun.

”We had a couple of issues near the end. It started yesterday afternoon where if we turned the car off, then we couldn’t get started! On the second last stage a couple of officials helped to push us to get it going again.”

It was a Porsche 2 and 3 for the Classic category, with the KTEC Autohaus 1976 Porsche 911 RSR of Brad Kidd and Ridge Kidd (#11) rounding out the podium, only 25 seconds behind the category leader. 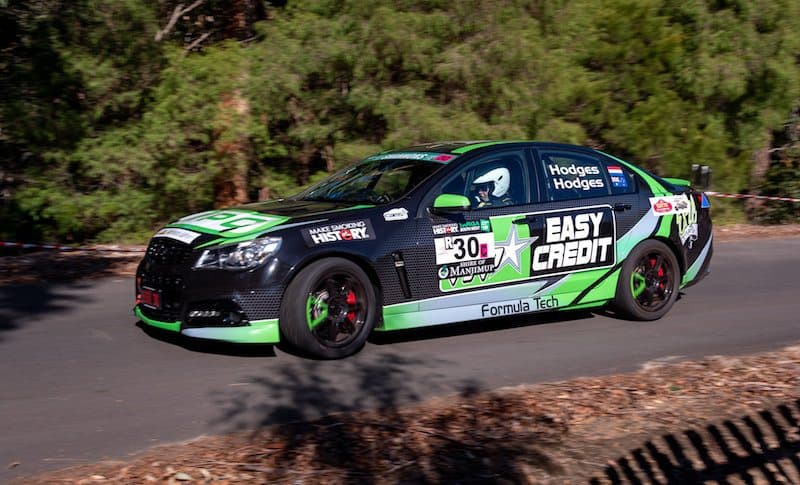 The rookie team of Davd and Anna Hodges in action. Photo: CMR Photographic

“It was our first Targa. We are really active with the HSV Club of WA - that’s where we got our start in motor sport. The club really get behind the Targa events, and inspired us to do this.

“It went really smoothly for us. I think Anna was a little bit nervous to start off with, but got right into the rhythm of it, and by the end of the event it was like she had been calling notes for years.

“We had one small problem with the car, but it was sorted out really fast, otherwise the car ran perfectly the whole weekend.”

All competitors expressed their gratitude to the volunteers, communities and organisers involved in making the event happen. A special mention goes to the Northcliffe community whose warm welcome and overwhelming demonstration of support has left a lasting impression on all involved with the event.

Organisers would like to thank Targa South West sponsors Healthway, along with the Make Smoking History message, Shannons, Cutts Transport, LF Performance, Manjimup Truffles,  and the Shire of Manjimup for their support along with series sponsors Go Gear and Perth Motorsport Tyres.

The next round of the Make Smoking History Targa Cup will be GT Fabrication Targa Bunbury Sprint held over the weekend of 23rd and 24th June 2018.