Plenty of positives for Pedder at Forest Rally

He’d claimed the ARMOR ALL Power Stage, the opening Heat of the weekend, and looked well on course to do it again on the second Heat, and then it all came to a crashing halt for Scott Pedder as his Renault Clio hit clutch problems.

Yet Pedder is looking on the positive side. Coming away from Western Australia knowing that with 10 weeks until the next Round in Queensland the Walkinshaw Performance team have a few upgrades up their sleeves.

“I was absolutely shattered because I feel it’s the best I’ve ever driven,” explained Pedder after the weekend’s Quit Forest Rally.

“While the weekend has ended on quite a negative for us there are a lot of positives to come out of it,” he quickly added. 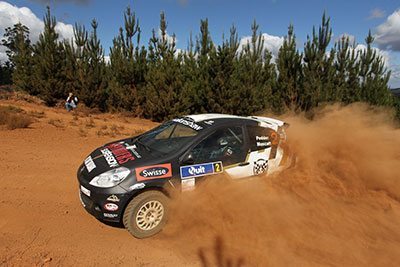 “The car is an absolute jet, the Walkinshaw guys have done a fantastic job with it and they deserved this win as much as I did. They are obviously as disappointed as I am, because at the end of the day it was a $20 part that stopped us.”

“It’s disappointing but the rejoin rules gave us a chance to get some points and get back into it. The Championship is far from over!” Pedder promised.

In the title chase Round 1 and 2 victor Brendan Reeves sits on 163 points in his Mazda2, with Pedder sitting in second down by 34 points, while Adrian Coppin’s Citroen DS3 sits ominously close behind in third a further 9 points back.

Pedder, and the Walkinshaw Performance team, are promising to pull out all the stops before the next Round, the International Rally of Queensland in mid-June.

“The 10 weeks that we have between now and Queensland will be well spent with even more development,” said Scott.

“He (Reeves) is probably in an interesting position where he can probably dawdle and still do alright for the Championship. I don’t think his ego will let him do that, but he’s going to have to finish every event now because that’s exactly what we are going to do, another failure is not an option for us.”

The team have identified the Clio’s two litre engine as the key focus ahead of Queensland, with the team feeling they are hamstrung by the FIA R3 regulations the car was built to by Renault Sport.

“The engine is definitely the focus now. The car is still running what I’d consider a ‘safe’ R3-spec engine, with a locked ECU. So our plan is to go to a Motec combined with a Walkinshaw built G2-spec engine.”

“It may not produce anymore horsepower but the guys assure me it will certainly produce more torque and that it will be more drivable. And I think that’s really the extent of the development work for us because the rest of the car, specifically the suspension and braking, is terrific,” explained Scott.

“Queensland, Rally Australia and South Australia are all events where good speed, in particular torque, are so important.”

The battle between Pedder and Reeves has been fierce already this season, and it will step up a notch in Queensland with the expected return of Eli Evans in his newly rebuilt Honda Civic Type-R.