M-Sport's Ott Tanak is still in with a chance of winning the 2017 WRC title.

Round 11 of the 2017 FIA World Rally Championship is Rallye RACC Catalunya-Costa Daurada, the only mixed surfaced event in the series, in which the first leg is on all-gravel or mixed surfaced stages, and the second and third days on asphalt.

The rally base is again at the Costa Daurada resort town of Salou , but the big change this year is that the Ceremonial start and opening super special stage in Barcelona will not happen.

The Thursday evening Ceremonial start will be on the seafront in Salou instead with no opening super special.

Technically there is little change in the event this year, teams use weather crews stationed at intervals along the stages, while safety “gravel note” crews operate on the Saturday and Sunday.  As usual, an extended service time allowance on the Friday evening will give teams more time to convert their cars from gravel to asphalt specification, ready for the final two days.

Experienced WRC2 championship drivers entered on a non-championship status include Eric Camilli, Ole Christian Veiby and Pierre-Louis Loubet.  Notably missing from the entry list are Hyundai driver Hayden Paddon, making way for Andreas Mikkelsen to make his debut for the team, and Citroen’s Craig Breen, as part of their driver event rotation plan which allows Kris Meeke to return to the WRC.

In the race to Championship titles, four drivers are still able to be Drivers’ champion – Sebastien Ogier, 17 points ahead of Thierry Neuville, while Ott Tanak and Jari-Matti Latvala are also eligible.

In the Manufacturers’ series M-Sport, Hyundai and Toyota can all still win, only Citroen is too far behind.

In WRC2, the title has already been taken by Pontus Tidemand.  The WRC3 and the associated Junior World Rally Championships, however, are complicated!  In both series Spanish driver Nil Solans is leading in front of Nicolas Ciamin and Julius Tannert.

Under WRC3 championship rules this will be the last chance for Solans and Ciamin to increase their scores, although there will be two more rounds after Spain.  This will be the final round of the JWRC series, so a new champion will be declared in Spain!

This year there was a late change in the JWRC incentive schemes in that championship rounds are paired together, and the best driver in each pair will win a prize drive next year.

There are four drivers eligible for this final prize – Tannert, Ciamin, Solans and Terry Folb, while the overall Junior title is down to being between Solans and Ciamin.

Finally, all three top contenders for the FIA WRC Trophy are entered, these are the championship leader, the Mini JCW driver Valeriy Gorban, for whom this event will be his final chance to increase his score, while both his challengers, Jean-Michel Raoux and his fellow Citroen DS3 WRC driver Jourdain Serderidis, can gainfully enter all the remaining events. 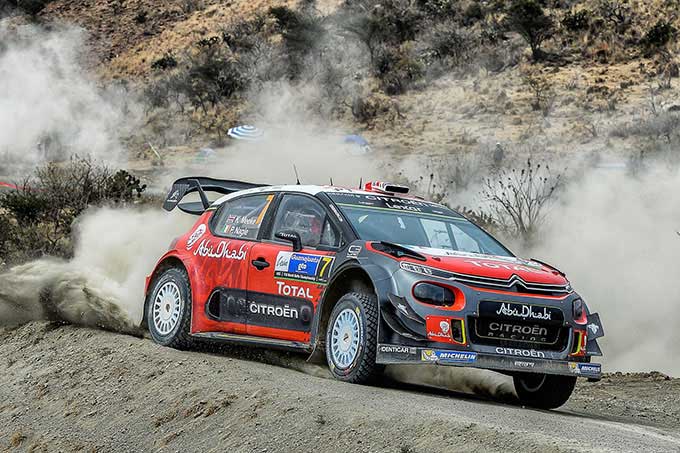 Citroen will be desperate to bounce back with a podium finish in Spain.

The most important experience in Germany had been to establish the potential of the team through the podium result for guest driver Andreas Mikkelsen.  The biggest challenge of Rally Catalunya is expected to be the double run through the 39km mixed stage on Friday where a car’s optimum set-up is important.

The team concentrated on the gravel stages in testing in which hopefully the team’s running order should favour them on Day 1 if it is dry and not too dusty.

No major technical changes are planned for the team on this event.  Same cars as in Finland but Lefebvre drives the car previously used by Breen.

The drivers to be entered by the team for Wales Rally GB will be Meeke, Breen and Al Qassimi, there are over two weeks before final decision will be announced for entries in Australia. 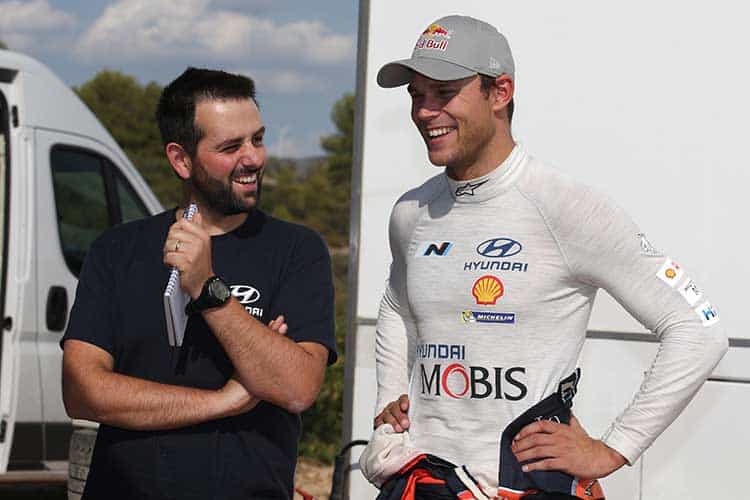 Andreas Mikkelsen will make his debut for Hyundai in Spain, and will drive for the team in 2018 and 2019.

A week full of news!  This will be the debut appearance with Hyundai for Andreas Mikkelsen who has been given a two-year WRC contract and who replaces Paddon here.  He will act as a fourth member of the team.

Rally Deutschland was a bad memory for the team.   Neuville made a small error with big consequences, Sordo made an unusual mistake, promised improvements in the service park were absent and the Saarbrucken stage was a disaster.

For Catalunya both surfaces are quite unique.  The team tested on both gravel and tarmac near Tarragona.  Andreas had also a day on tarmac near Mazamet in France.

Attention was on both gravel and tarmac as both surfaces are quite special in Spain.  Some technical changes are due to be homologated in time for the rally.

Drivers will use the same cars as in Germany, Mikkelsen using the car driven by Paddon.

After a trouble-free Rallye Deutschland and a busy weekend at the Rallyday function, M-Sport goes to Spain running no fewer than nine cars (there will be 10 at Rally Wales GB).

Expectations about Catalunya: the stages themselves don’t pose any specific challenges, but for everyone this will be the first time teams carry out the changeover from gravel to tarmac in the extended 75 minute service with the new (more complicated) cars.  That is expected to be one of the biggest challenges of the weekend for M-Sport.

Testing concentrated on asphalt, with one day each for each of the three team drivers.  No technical changes on the cars, each team driver used the same cars as in Germany.

Regarding memories from Germany, the team felt that both the Service Park and the Saarbrucken stage could have been improved upon.

Reaction from Rallye Deutschland, disappointment at the unexpected damper problem for Juho Hanninen which was another technical problem after Latvala’s ECU problem in Finland.

Main challenge in Spain is that both surfaces are very different from recent rallies and the team made equal testing on both surfaces, all close to the rally area.

Main technical change is that the brake cooling system has been updated to be more resilient to dirt and gravel, this allows the same parts to be used between gravel and tarmac.

The three team cars will be the same that the drivers used in Germany.

Notable is that Latvala finished second on this event for four successive years, from 2012-2015.  No Finnish driver has won this since Toyota Gazoo team principal Tommi Makinen did this in a Mitsubishi exactly 20 years ago!