RAV4 on track for US title with Aussie Gelsomino

Toyota's "down under" duo of Ryan Millen and Rhianon Gelsomino are one victory away from clinching the American Rally Association 2WD championship in their Rally RAV4.

The pair has a commanding lead in the title race, having won the first three events including this week's Olympus Rally in Washington state.The Toyota's durability and reliability were crucial factors behind the latest win as multiple competitors fell by the wayside with broken-down vehicles."It's something that we don't have to worry about, again speaking for our reliability," said Millen, the son of New Zealand Pikes Peak champion Rod.Commenting on the tricky conditions in Washington, Millen said, "You have to be mentally strong and remember that everyone else is dealing with them too. You don't know what mistakes they're making, and you have to keep the focus on your battle."Millen and his Australian co-driver Gelsomino took full advantage of an aggressive tyre strategy and the ride height, suspension travel and grip of their front-drive Toyota RAV4, which features a stock powertrain with automatic transmission.It was the second straight year Millen and the Rally RAV4 have won the Olympus Rally - this time by an impressive margin of more than seven minutes.With victory in the first three rallies giving them 66 championship points to their nearest rival's 43 points, Millen and Gelsomino need to win just one of the remaining three rallies this season to secure the title.Gelsomino said she was determined not to let complacency set in as the team aims to keep the chance of a perfect season alive.The duo will next compete in their Rally RAV at the Susquehannock Trail Performance Rally in Pennsylvania on June 2-3. 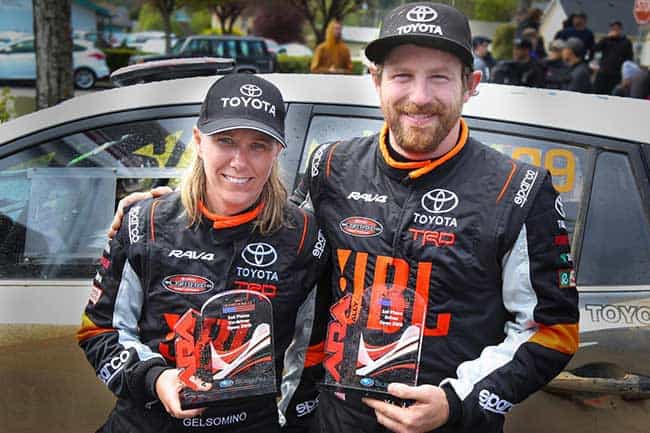