On the 18th December 1991 Lancia announced its withdrawal from rallying. In less than a month Martini Racing, Lancia’s partner of 11 years, announced its decision to take over the activity for 1992, the rally operation to be run by the Jolly Club Team. Jolly Club boss, Roberto Angiolini, passed away on April 4, 2020. We thought it was timely to look back to when Martin Holmes visited the Jolly Club factory ...... * * * * * Jolly Club began life in 1957, in a restaurant in Milan, a favourite location of Mario Angiolini and friends whose common passion was motor sport in its various forms. 'Friendship, passion, versatility and fun' were the principle objectives of the founding members, who little realised that 35 years later their organisation would be chosen to spearhead an Italian attack in world championship rally sport. Now much more than a club for enthusiasts, Jolly Club was a multi-faceted organisation that opened itself to activities in many different directions, although the professional rally and racing division were at the forefront. Current chief, Roberto Angiolini, son of the founder, had a passion not only to represent Lancia in world championship motor sport in 1992, but also to foster the careers of future top stars. Roberto explained a little of the background of the company. "The name Jolly was taken from the special playing card ('joker' card) which is able to do more than any other card.” 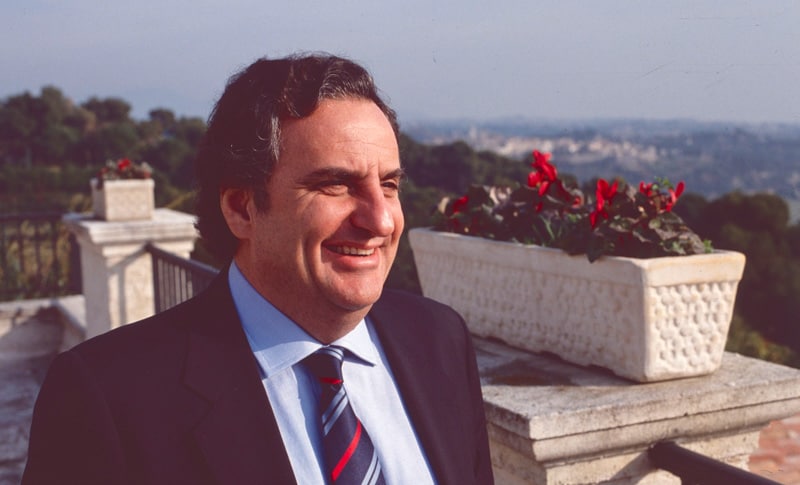 The world of Jolly Club had come a long way from the days in a Milano restaurant. What were Roberto’s memories of the old days? "Our first World Rally Championship victory was in 1979 when Tony Fassina won Sanremo for us with a Lancia Stratos. Then last year our second official victory came in the hands of Didier Auriol in a Lancia Delta Integrale 16v, also at Sanremo.” Why has Lancia found itself unable to remain involved in competition? "Big companies have to comply with rules laid down by the unions. These make it very difficult for a big company to engage in racing. Overtime is one example. Unions do not want some workers to have a lot of overtime: they would rather we employed more people instead. Small companies like us do not face these troubles. "The only people we employ are fully engaged in racing, rather than being only a small proportion of the total work force. We need one person available for us for 24 hours, not three different men for eight hours each. This thing is a terrible problem for a company like Fiat.” How does this work out on an event? “It was very difficult for Lancia to run more than two cars last year (1991); they needed a back-up organisation which Jolly Club were able to provide and worked out very well. When it came to the Acropolis Rally, for example, it meant that Lancia were the only team able to provide a full service back-up. Nobody else could do it.” 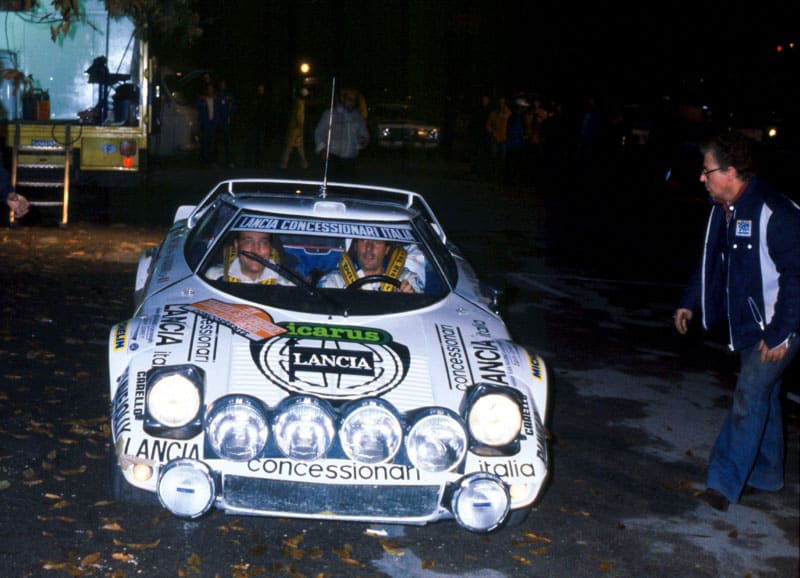 The Lancia Stratos of 'Tony' on the 1979 Sanremo Rally. Photo: Martin Holmes

How do Jolly Club and Abarth mechanics work together? “Nearly everything is exactly the same as last season, all that is changing is the way we work on the races. We have been working closely with Abarth for twenty years and a lot of the mechanics now working at Abarth came from Jolly Club. Their chief mechanic Rino Buschiazzo was once my chief mechanic! "Ninni Russo was a codriver for the Jolly Club driver Alcide Paganelli. Giorgio Pianta drove for us. A lot of our mechanics started as apprentices at Fiat to give them work experience." What do you think of the current Group A cars? “The competition car regulations have completely changed the nature of rally sport. The cars are now monsters which are too expensive, too far away from contact with production cars, with technical challenges which are quite different. We cannot change the style of rallying in 1992, but we should be pushing for changes in the future. "To participate in rallying as we know it nowadays, you have to ask for annual budgets of 50/60 million dollars, and you cannot ask that from constructors. Then there are the technical regulations – with engines which can produce 500bhp which must be fitted with restrictors that contain this power to 300bhp, you are involved in very expensive electronic research to gain the best advantage. It is all so wasteful.” 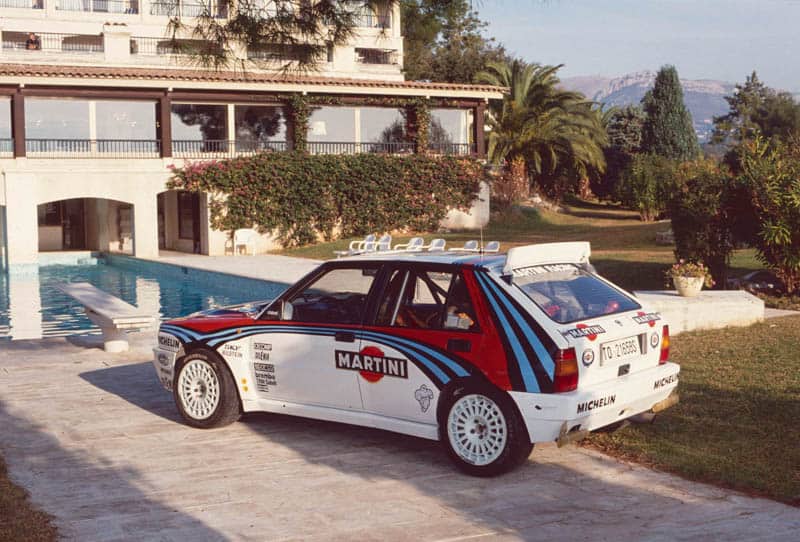 And the use of turbochargers? “This is an old system in engine design. Turbos are principally used in Italy to reduce taxes, by artificially keeping the size of the basic engine smaller on road cars! If we must keep down to 250bhp we should have 2-litre normally aspirated engines. Actually 2.5 litre is a sensible limit so everyone who wants can be active in rally sport. "Another problem is that there is now no justification in rally sport to put feedback into the research for road cars. The only reason for competing in rally sport as it is, is advertising. At least in Formula 1 they are developing atmospheric engines, we are still stuck with turbochargers. All these things Lancia has to consider before they can decide if they are going to come back officially to rally sport.” Where will Jolly Club’s budget for the 1992 programme come from? "The budget is mostly from the sponsors, with only a little financial contribution from the factory. But the preparation and development of the car is all from the factory. I suppose if you consider total expense, then the sponsors are paying not more than about 20%.” 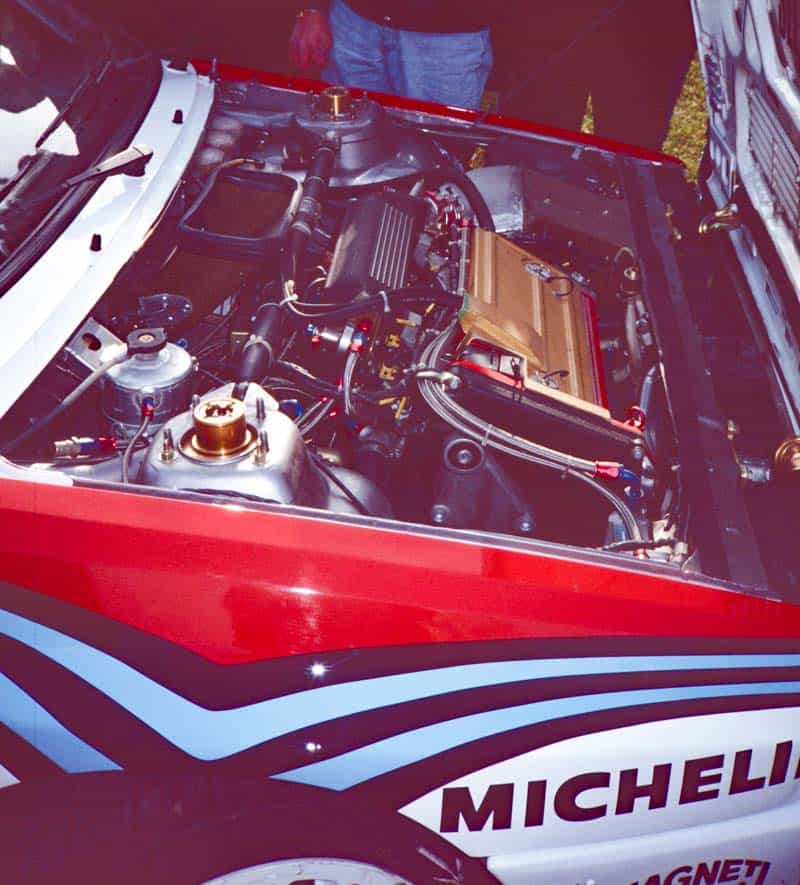 Will Abarth continue to develop the Delta for competition? "The HF Integrale car will continue to be developed till the end of 1992. Abarth will build the cars, do all the pre-rally testing and take charge of technical evolution. We are being supplied with fourteen new competition cars for the season and I expect this model will continue well into the 1993 season.” Where will the cars be prepared? “At this moment, it is not decided whether the cars will be maintained between rallies here in Milano in the Jolly Club workshops or in Torino at Abarth. We have more capability for setting-up the cars. Cars have to be prepared in different specifications: asphalt for Monte Carlo, light gravel for Portugal, heavy gravel for Safari, and strengthened Portugal specification for Acropolis. "Third type of gravel car will use a lightweight chassis in Finland. All the engineering and testing systems are exactly the same as last year." 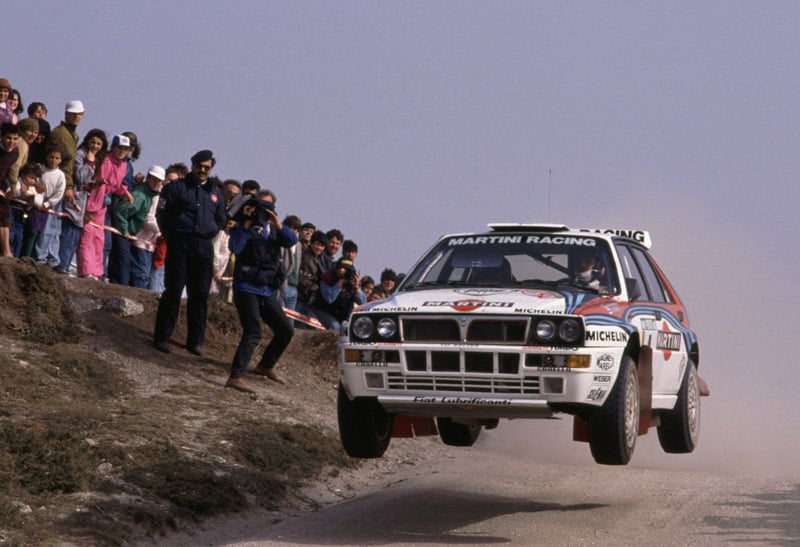 At Jolly Club their roots are never forgotten. “We are always wanting to help younger drivers. Not those right at the beginning, but those one step further up, which is why we are very pleased to be able to offer rallies to Andrea Aghini. It isn't just the fact that these drivers are less expensive, it is the fact we want to be part of the way the next generation operates." 1992 saw Jolly Club go on to win eight out of the 10 rounds in the Manufacturers’ series, six with Didier Auriol at the wheel, and one each for Juha Kankkunen and also for their young star Andrea Aghini. It was Lancia’s sixth consecutive Manufacturers’ title win, bringing their total series wins to 10, scoring 74 WCR event wins, a record number Lancia was to hold until 2011. +++++ Roberto Angiolini died on the 4th April 2020, remembered by Ninni Russo: "Roberto was a great sport manager able to show how a private team managed with professionalism and strategic vision could reach the top of the WRC level. His team was the school that allowed many young Italian drivers to show their value and potential. "With his drivers he was considerate, but at the same time severe when needed. He didn't like the 'smart' ones. He made drivers or better crews grow, who then went on to win world titles. This was Roberto, a great person and a good friend." 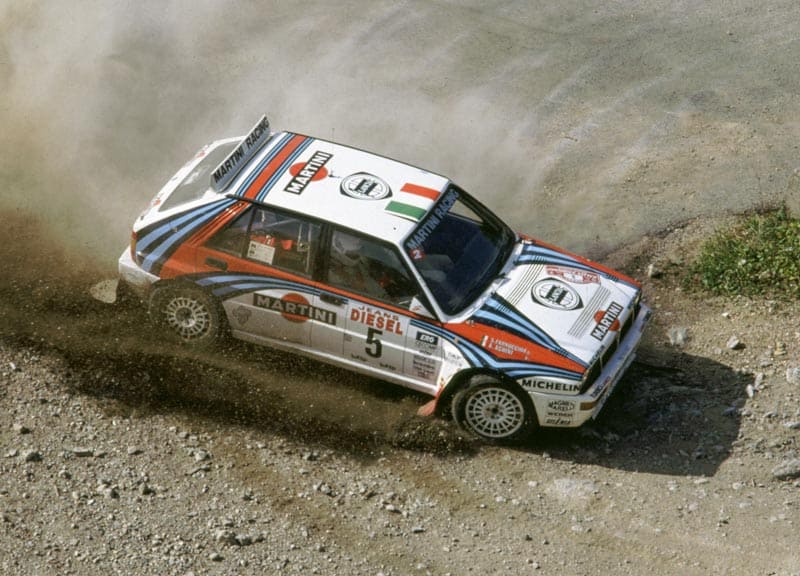 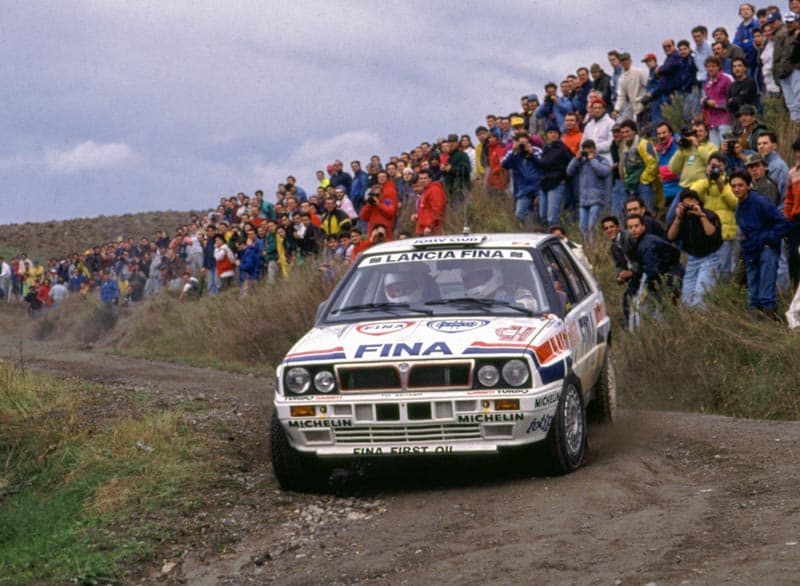 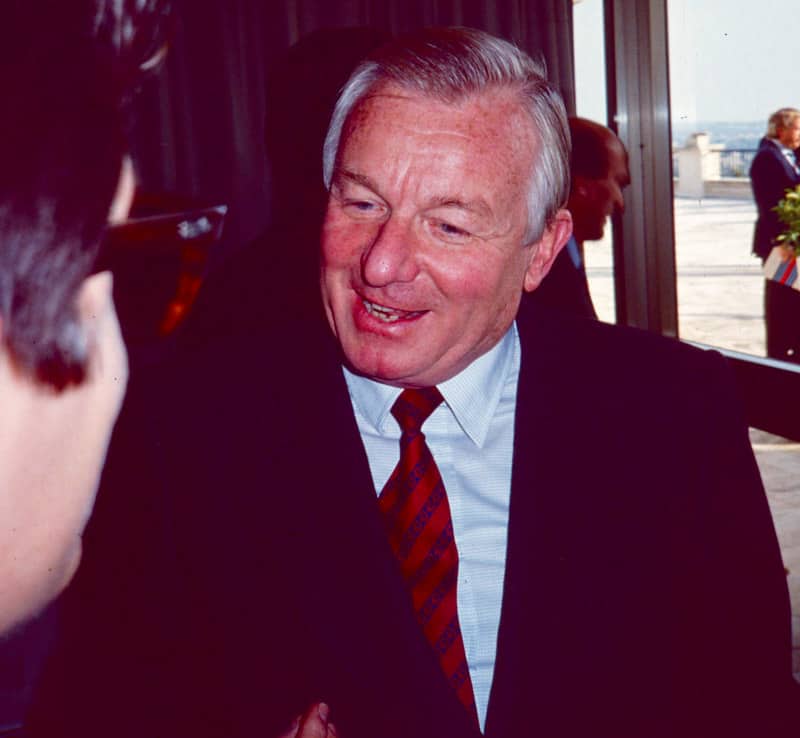 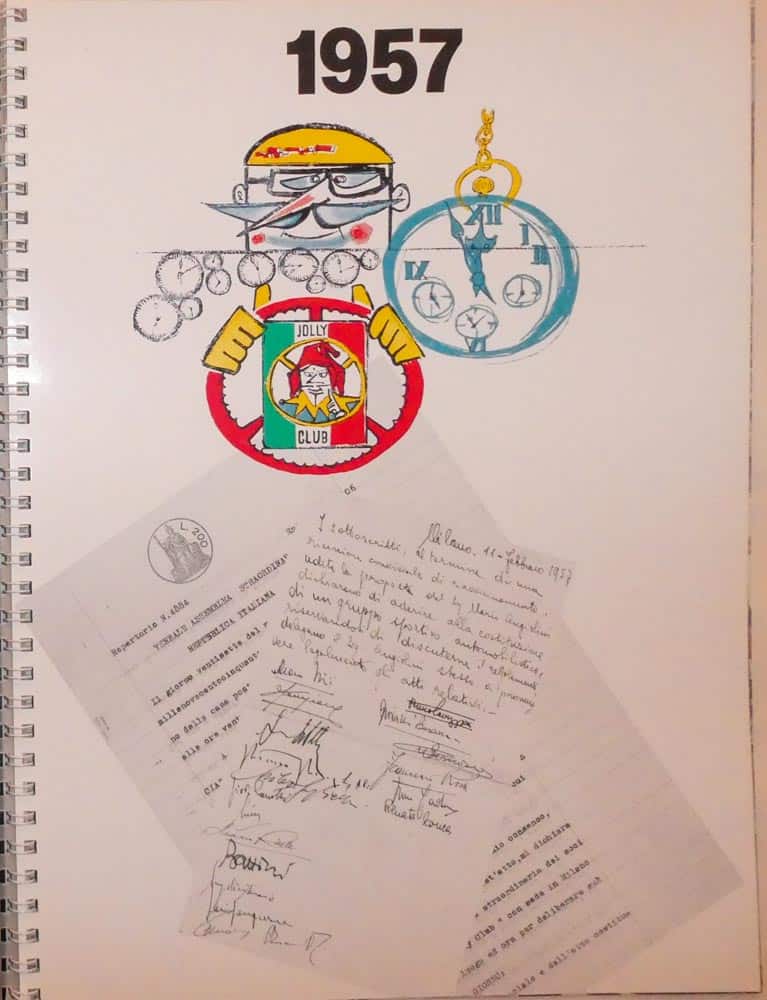 The opening page of the Jolly Club brochure from Lancia's 1992 presentation. 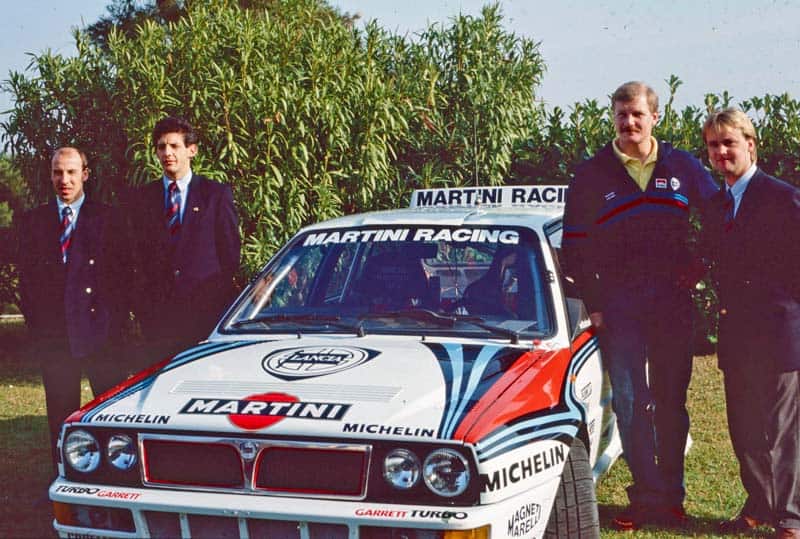 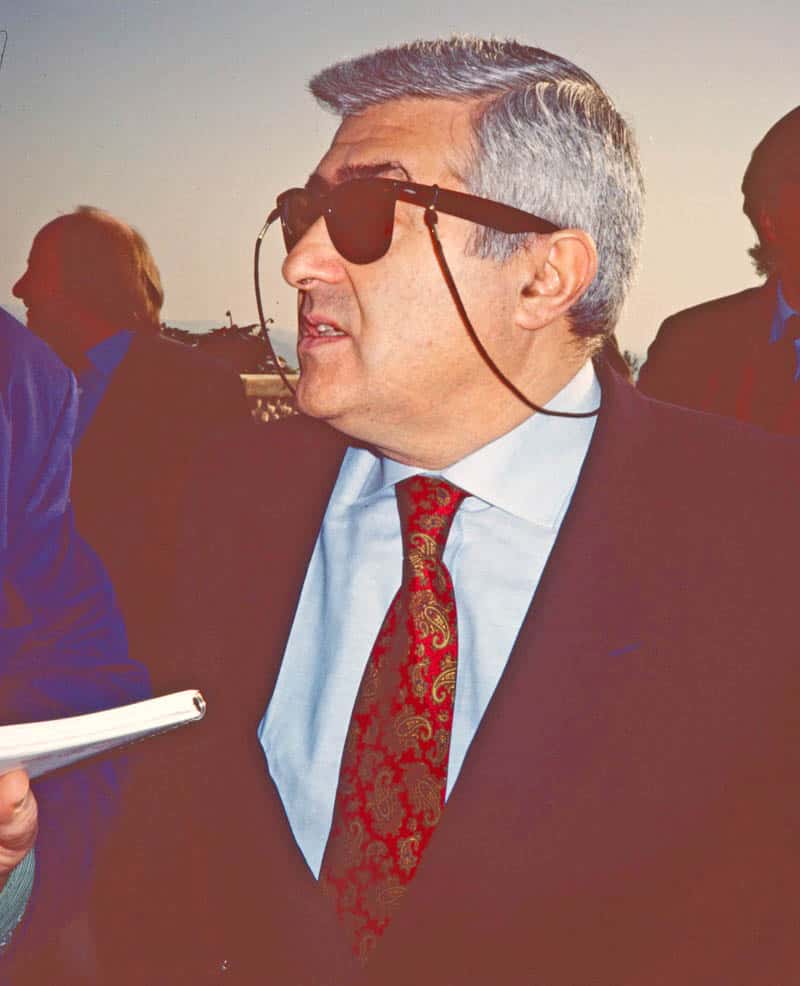