Reigning ERC champion Kajetan Kajetanowicz was the fourth different leader on the Seajets Rally Acropolis, but held the lead at the finish, beating Bruno Magalhaes by nearly three minutes.

Kajetan Kajetanowicz won the tough Acropolis Rally in Greece.Straightaway from Shakedown the rally was being dominated by 19 year old Russian Skoda driver, Nikolay Gryazin, but on the road section to the final stage of Day 1 his car caught fire and was destroyed by the side of the road.

This let Nasser Al Attiyah in the lead, 8.4 seconds ahead of Magalhaes, with Kajetanowicz third after suffering two punctures.

On the opening stage of day 2 Al Attiyah’s engine stopped when the power steering failed and he lost two minutes trying to restart it, dropping down to fourth, and Magalhaes moved in front.

Magalhaes led for two stages but on the third stage of the loop his Skoda engine started to cut out when the driver shifted gear, initially dropping him 20 seconds behind the new leader Kajetanowicz. 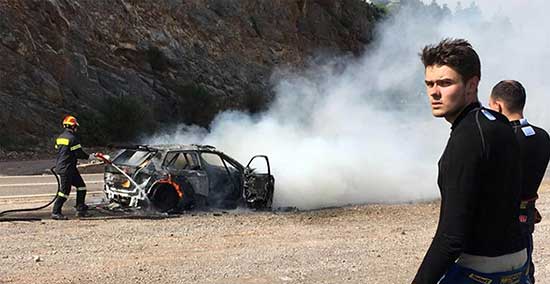 Nikolay Gryazin led until his car caught fire and burnt to the ground.His team, however, could not trace the problem, leaving Magalhaes to drive to the finish, holding his second place but increasingly falling back.

All this allowed Grzegorz Grzyb to climb to third, but it was behind that a most remarkable series of misfortunes were happening. The final stage of the rally saw three of the top seven cars all retiring, having been driven off the road.

This event did not count for either Junior rally championships.

After Acropolis, Magalhaes leads the main ERC series with 93 points ahead of Kajetanowicz with 72 and Lukyanuk with 46.